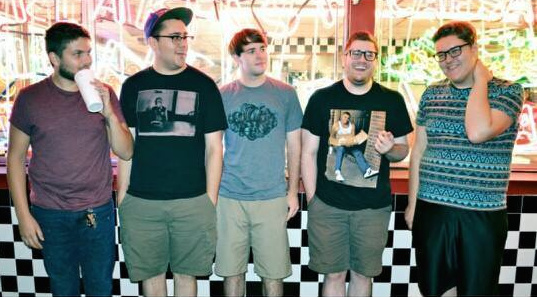 Opening with “Earthbound & Down” by Sister City, the split ushers you in with cymbal-heavy beat and shouts of “Ever so slight is the slime in my throat” from frontman Adam Linder. The track is carried throughout by an inviting math-punk rock chord progression from Linder and John Gamble, while the chorus in this song screams Your Favorite Weapon-era Brand New with its pop-punk bass line from Joe Wolfe.

“Skyline,” Sister City’s second track on the split, keeps drummer Daniel Abzug at work with enticing fills and intricate drum patterns. Linder’s lyricism is more complex and leaves you wanting more poetic themes with lines like “So pick a myth or prescription, fill your head with either one.”

On the flipside, the Arrested Development-named Uncle / Father Oscar bring the emotionally-packed vocals to this split. “Old man Joyce used to fix up Thunderbirds in here (years & years ago)” is the first track from the Delco-based indie-punk five-piece. It opens with soothing vocals from Keith Rogers and head-bobbing guitar riffs from Dallas Scott and Tom Conran. Kyle Bosler sets a sweet bass line that is bumping prominently throughout the track.

The split closes “Murder on the Beach,” where Scott’s beautifully raspy voice is backed by catchy harmonies. Drummer Keith Rogers gets to jam out on this track with an upbeat hi-hat and snare-fill heavy beat.

Listen to the split below; Uncle / Father Oscar plays live at The Baker Bowl on Saturday, February 7th (more information here) while Sister City plays The Next on February 21st (more info here).