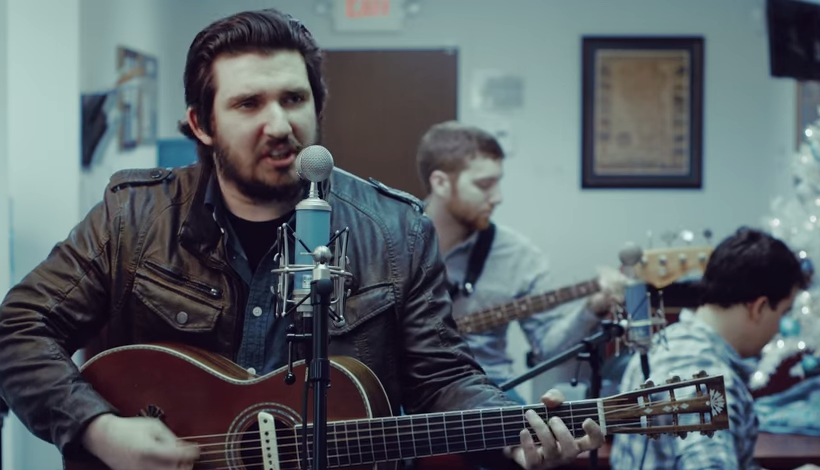 For those of you who don’t know about NPR’s Tiny Desk Concerts, you may want to head over to their site and root through their enormous and equally impressive archive. Their 15-minute videos feature live performances from artists of all genres held in the quaint offices of NPR at All Songs Considered host Bob Boilen’s desk.

Ranging from big names like Adele and Alt-J to up-and-coming artists such as Angel Olsen and Rubblebucket, viewers are able to watch the artists perform in the intimate setting, giving the performances a stripped-down, no B.S. vibe. While these videos are ultra fun to watch (perhaps continuously, one after another…), NPR kept things interesting this winter by kicking off a contest to feature a new artist in their series.

Based entirely off of video submissions from all over the United States, an artist will be chosen to perform a Tiny Desk Concert at NPR headquarters in Washington D.C. as well as snag a slot in the big Lagunitas Couchtrippin’ showcase in Austin, Texas. Philadelphia, brimming with the amazing musical talent that it is, seems to have jumped at this opportunity.With dozens of submissions from the area, it is clear that there are Philadelphia artists just waiting to prove themselves. Local musicians took the theme and ran with it by getting creative with their settings, each video giving a unique glimpse of what these artists are doing.

Check out the video list of Philadelphia applicants in the Tiny Desk Concert Contest below. You may just see one of them as a featured guest in NPR’s office.

Philadelphia folk-pop group Dirty Dollhouse‘s Chelsea Mitchell chose to play in her bathroom next to a little desk for her entry. Her spot-on vocals engulf the small room as she belts out her song “25 Shades”.

Rootsy folk group Apache Trails took a quirky approach to their music video by meandering into a local Goodwill, finding a small desk and performing live in the store, attracting onlookers all the while.

Philly artist Ron Gallo plays his brand new song “Kill the Medicine Man” and gave the video cool vibes, kicking it off with video shots through a mirror perched on a desk in his apartment.

Downingtown singer/songwriter Chelsea Sue Allen performs her heavy track “Tall Dreams” in her apartment with twinkly lights strung about, pairing nicely with her deep, raspy voice to give the performance a mellow ambiance.

With the help of a looping station, Philadelphia’s Square Peg Round Hole play their upbeat track “A-Frame”. One instrument at a time, they put together the track right in front of our eyes (and ears), even utilizing beer bottles and laundry hampers as instruments, making for a cool thought as a Tiny Desk Concert.

Abi Reimold, from Philadelphia, plays her spacey song “Share” in front of a simple desk illuminated by a bright lamp.

Philly vocal trio No Good Sister begin their video with a classic clapperboard and a fit of laughter before launching into their song “Everything Else” with fellow bandmates in a cool, plant-infused apartment.

Localite Alison Polans sits in a warm, homey setting surrounded by small desks, an uprooted car seat, a lone lamp and a drum kit. She uses her acoustic guitar and soothing vocals to fill the room with her song “Kindest of Hearts”.

Old-style country group Levee Drivers give their entry a classic feel in their song “Miles On End” filmed behind an office desk. With lead singer August Lutz’s deep, booming vocals, the group’s musical storytelling abilities make themselves quite evident.

Indie folksters Black Horse Motel from Philadelphia show just how much fun performing can be as they launch into their song “Broken Crown”, filled with soaring harmonies, violin flourishes, and a moving melody that builds throughout the performance.

Singer/songwriter Ginger Coyle is another artist to feature a miniature desk as an introduction, with tiny papers announcing her entry. Her soulful vocals and jazzy piano lines make a great case for a Tiny Desk Concert all her own.

Newark’s The Honey Badgers put forth an honest performance filled with soft harmonies and upbeat guitar lines in their song “Madness”.

Philly folk duo Brad Hinton and Bethany Brooks keep things simple in their performance of “Wandering Eye”. Accordion and guitar weave in and out of Hinton and Brooks’ quiet vocals, creating an alluring conversation between the two of them.

Philadelphia artist James Ausley of The Brave Fiction performs his song “Legacy of Sound” with a whole lot of soul perched desktop in his apartment.

Philly rockers Pine Barons took a more eclectic approach, donning their performance area with bizarre mannequin heads and masks. The energetic bunch show off their musical abilities with a loop pedal, a fun backbeat, and chiming xylophone lines in their song “Chamber Choir”.

Son Step, a local experimental pop group, perform their song “Steam Team” for their entry. Their mellow pop vibes come across clearly and make for a fresh sound to hear as a Tiny Desk Concert.

The enormous West Philadelphia Orchestra squeezed into a room to film their Tiny Desk Concert entry. The video is filled with energy and lively sounds which are sure to set them apart from other entrants. Just imagining them all fitting into the NPR offices is a fun thought.

Philadelphia artist and Pawnshop Roses lead singer Paul Keen performs his song “Steady Through the Storm” while sitting at his desk- a simple performance keeping things focused on the music but ending with a lighthearted laugh.

Phoenixville country collective Kicking Down Doors play a fun performance of their song “In The Way” while flashing grins to one another throughout the video, making it clear that they’re enjoying themselves.

Wilmington, DE folk rockers New Sweden make a case for themselves as they play a tight performance of their song “Warships”.

Local rock n’ rollers Hymn For Her put out an energetic and rowdy performance of their song “The Road Song”, the video appropriately set in their 1961 Bambi Airstream trailer.

Philadelphia’s country rock collective Dirty Holiday fight for the slot with their catchy song “Flood Gates”, performed in front of an antique telephone desk.
Wilmington country artist Kyle Swartzwelder features a dog in his video while he sits at a furnished wooden desk with an old-school radio as he sings out his song “What A Dream”.
Philly-based singer/songwriter Elspeth Tremblay performs her song “Tyranny Of Distance” in front of a strikingly similar background to that of the Tiny Desk Concerts themselves, her cool vocals laying comfortably over soft guitar lines.
Philly’s bluesy folk duo Owl and Wolf play their song “Graves” in front of tapestries and twinkly lights in a bungalow apartment, creating a homey ambiance mixed with their sultry tunes.
Andrea Nardello, a singer/songwriter from Philly, plays her song “Home To Me” cross-legged on the floor, keeping vibes comfortable and easy.
Philly’s Bethlehem and Sad Patrick perform their jazzy song “How Soon Can You Leave Here?”, where mellow guitar meets Bethlehem’s powerful, entrancing vocals.
Bluegrass duo The Barn Swallows‘s video keeps things light with laughs before laying into their upbeat ditty “Darlin’ Come Back Home”.
Mechanicsburg-based group The Vulcans play their song “Scarlet Rose” in front of a live audience at a local coffeeshop for their entry, keeping the energy alive with their powerful harmonies and tinkling banjo.
Paige Albritton, a Washington, D.C. native now based in the region, puts forth a simple performance for her song “I Don’t Wanna Know”. Her raspy, soaring vocals pair nicely with a rhythmic guitar line.
Philly’s Cicada Jade gives their contest entry a heavier feel with strong bass and crooning vocals, all sharing a seat on a large, white desk.
Philly 8-bit electronic producer Chipocrite performed in the video game-themed office of a friend as they play their Gameboy-based track “Henceforth”
West Philly locals Ladybird share their acoustic Americana with us as they play in front of an awfully familiar oak desk topped with a radio and featuring an equally familiar dog (perhaps the same setting as Kyle Swartzwelder’s video?).
Philadelphia singer/songwriter Joy Ike performs her memorable song “No Matter What” in an open kitchen, playing with immense amounts of heart and soul.
South Philly duo The Life open their video with a miniature desk like some of the other entrants and sit at a windowsill atop a desk while playing their snippy song “Pull Me Up”.
Philly folk artist Dani Mari, whom you may have seen in Owl and Wolf’s video earlier in the post, entered a personal video for her own song “Only”. Her unique vocal timbre and bouncy banjo parts make for a solid submission.
Experimental guitarist Dan Malloy, from Port Richmond via Elkins Park, performs his song “Drunks Don’t Know Everything” for his entry, utilizing spacey echo effects to create his soundscapes.
Related Content
View All Related Content