Does it matter that the Tiny Desk Contest winner was once signed by Interscope? 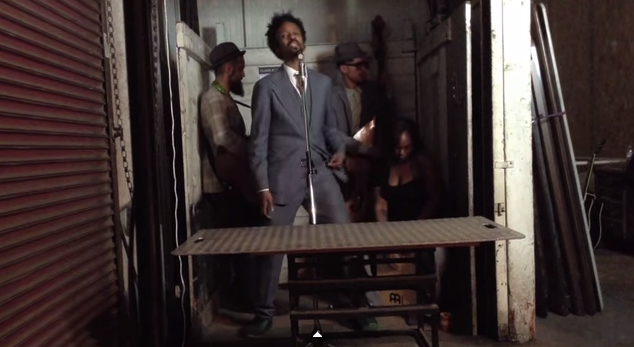 Does it matter that the Tiny Desk Contest winner was once signed by Interscope?

Without a doubt, the Tiny Desk Contest was one of the most inspiring musical happenings of the past year.

After developing a global fan base with their uniquely-curated videos of unfussy, informal concerts held at producer Bob Boilen’s desk, the NPR Music team this winter opened up the floor to the public, inviting them to shoot their own DIY Tiny Desk-esque videos and submit them via YouTube for a chance to win a slot on the series.

On the one level, it felt like the small-time local heroes from around the country were being given a chance at stardom in that special, Tiny Desk kind of way. Beneath the surface a bit, those of us who work in music know that many of the artists already featured in the series are in the midst of some sort of press cycle, a national promotional push for whatever album they happen to be selling at the time.

As I said, it’s a well-curated run of videos, but most of the artists who make their way to Boilen’s desk are doing so with some level of industry connectedness in hand. This may or may not play a part in how they are chosen, but this contest seemed like it was at long last opening up the Tiny Desk to performers who might not have a label, might not have a heavy-hitting manager, or a booking agent or a publicist. It felt like somebody from totally outside the industry might have a shot at being showcased.

The contest pulled in over 7,000 submissions. On the local level, Philadelphia artists contributed 75 videos and, as you can see in our partial roundup of entrants, it’s an impressive array – rock and roll filmed in the middle of a Goodwill store, country-folk filmed behind a bathroom counter, experimental pop in a basement rec room, Eastern European dance music in what looks like an emptied restaurant. (That last video is by the great West Philadelphia Orchestra, by the way, and it was amazing to see them show up as an honorable mention when NPR Music announced the winner.)

The video above is by the winner in question: Fantastic Negrito – the stage name of Xavier Dphrepaulezz from Oakland, California. He performed his song “Lost In A Crowd” in an empty freight elevator with an industrial desk standing in front of him. His bandmates pluck at acoustic and folksy instruments, singing along in a moaning Southern blues drawl – a somewhat overdone style in the post-O Brother, post-Black Keys universe, for certain – but when Dphrepaulezz opens his mouth to sing, it’s clear what impressed the Tiny Desk folks: his voice is crisp, assertive and commanding, and he’s a charismatic performer – the trio doesn’t move from outside the elevator, and aside from the camera taking a single angle shift, it’s a static and unbroken shot, but it’s hard to look away.

The judges sang Fantastic Negrito’s praises. Boilen says “He just leapt off the screen”; Valerie June reflects “they’re stuffed into a tiny corner, playing this music that seems as big as the world”; Robin Hilton added that while most entries “blurred together,” this was a “captivating, emotional and memorable performance.”

As a young man, the Oakland singer taught himself to play just about every instrument he could get his hands on. But after making a record that failed to take off, he felt his confidence and artistry suffer.

“Making a record that failed to take off.” That understated phrase is where the story gets interesting. Any number of independent, labor-of-love musicians around the country might know a thing or two about records failing to take off. They could read that line and think of the time they self-released an album and sold it through Bandcamp to no avail, or the time their buddy put out a short run on his upstart vinyl label but they remained in boxes stacked in the basement.

Dphrepaulezz’s story is a similar one, but on a major label scale. In the 90s, he performed under the name Xavier, played shows with De La Soul and released an album called X-Factor in 1996 on Interscope Records. As he told the San Francisco Chronicle last year:

Jimmy Iovine signed me personally to a million-dollar contract, and I lost my identity for a long time. That system is so predicated on making a hit or you’re out of here.

He tried to take it as positively as he could and in a 1996 L.A. Times interview told his story of finding music as a troubled youth and keeping his blossoming music career in perspective:

I’m just thankful that I have my legs, my arms, my eyes. . . . I don’t have any physical problems. I try to be as positive a person as possible. People forget about simple things. If you’re fully functional, you can do anything.

Nevertheless, Dphrepaulezz struggled with his label for creative control, and following a 1999 car crash that put him in a coma for three weeks, was released from of his contract without having released a follow-up album. He got into a music publishing career, which has sustained him since his label days, and described Fantastic Negrito to the Chronicle as his “third phase.”

It’s an amazing, emotional story, but let’s take stock of some key details here: million-dollarcontract…Jimmy Iovine personally signed to Interscope…music publishing career. These hardly sounds like traits of a winner with an up-from-the-bootstraps, non-industry-connected background many artists thought this contest was looking for as they found clever places to set up their tiny desks and play. Fantastic Negrito was not an undiscovered champion – he was rediscovered.

But should it matter? NPR Music never claimed that that the winner was going to be from outside the industry. The contest rules were actually rather inclusive: entrants must be a resident of the U.S., they must be 21, they have to perform in front of a desk (“any desk!”) and they cannot “have a current recording contract.” Operative word there: “current.” A long-expired contract and a career in music publishing, however, is a different story.

All this is not to disparage Fantastic Negrito. As I said, while this song is a tad on the generic side, the performance is totally gripping, and had we not dug into it and found his back story, Dphrepaulezz would have made total sense as the winner. He still does, as it’s music that’s a practical embodiment of the NPR Music ethos – authenticity met with charisma, reverence to musical history but some mystique that’s not necessarily easy to pigeonhole.

At the same time, I’m struck with a sense of disappointment at these results. Partly as a music fan who loves hearing emerging, independent artists for the first time, before they’re subsumed by the mechanizations of the music industry. But also as a journalist who follows the careers of hundreds and hundreds of eager and talented musicians in the Philly region: musicians who truly are independent, who have zero degree of connectedness, have never had a record contract, never ran a behind the scenes business in the music industry, never played for more than a couple hundred people at a time and yet boast every bit as much talent as those who are signed, who thought – however realistically – that their homemade video was their door to the bigger audience. I’m disappointed on their behalf.

In his post-contest recap on NPR Music, Boilen admits it was a trying process.

Deciding on a winner wasn’t easy. People put their hearts and souls, along with a desk of their choosing, into the nearly 7,000 submissions. Some did it to win, some did it for fun. What I loved most is that regardless of motivation, people got together to do something they may not have ever done, to create something unique and something they’ll be able to share with friends and family forever. I think of all the desks dragged into nature, onto hilltops, into and around oceans, through offices and kitchens, classrooms and science labs. Friends gathered and made something memorable, and that’s my favorite part of this, our very first Tiny Desk Concert Contest.

In that regard, everybody was a winner for being part of a shared, unique experience. And I’m sure if I asked any of the Philly participants, they would say it was just a heck of a lot of fun to participate in, a cool project to work on.

But with Boilen’s words “very first” hinting that the Tiny Desk Contest may be a recurring feature, let’s hope that the good folks at NPR Music keep these results in mind and next time, find talent that truly comes from outside of the music industry box.