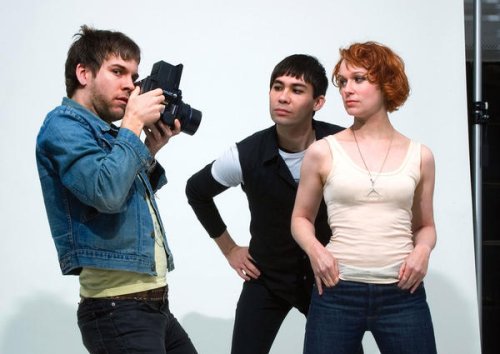 If I can remain calm and keep my hands steady enough to type this post, woah, wow, Rainer Maria. Rainer Freaking Maria, reunited and it feels so good, headlining Union Transfer in April, per an announcement just made this afternoon by R5 Productions. But wait, what’s the big deal, John? Some catching up for those who may not remember these stars of the emo / indie rock scene in the late 90s and early aughts – they’re an outstanding live band with a fierce power trio dynamic. Incredible vocals, incredible introspective lyrics, incredible arrangements and textures and rhythms. (Do I like the word “incredible” much? Maybe.) I’ve collected five of my favorite moments from the Rainer Maria catalogue below, and I am totally looking forward to screaming along to these when the band plays them on Saturday April 18th. Tickets for the all-ages show go on sale this Friday, and they’re insanely affordable. More details via the Union Transfer website.

“Ears Ring” from Long Knives Drawn – It was a spring night, 2003, the Church basement. I was there to see Mates of State, but holy crap this Rainer Maria band I’d heard my friends talking about for like years was just too good. This was the single from their new record, and it was punctuated by a tide of bodies ebbing and flowing at the foot of the stage, slamming into the monitors and screaming along to the lyrics, freaking the hell out. Kyle Fischer rocked it like a maniac on his side of the stage, De Marrais pirouetted on her side of the stage, Bill Kuehn beat the hell out of his drumkit. Somebody in the crowd kept screaming “Who’s that sexy motherfucker on the drums?!” My mind: blown. Instant fan conversion.

“Artificial Light” from A Better Version of Me– Digging into their back-catalogue from that point had many its rewards as well as, admittedly, challenges. Better Version was probably Rainer Maria’s most adventurous, least poppy album, and didn’t grab your ears or attention as immediately as the rest of their catalogue. But yo, give it time. “Artificial Light” will set you free.

“Planetary” from Look Now Look Again– Then again, digging through their catalog had its reward-rewards. Look Now is the band’s definitive album, a beautiful emotional rush of guitars and sound and vocal catharsis. The arc of the record is amazing and “Planetary” is the song that kicks it into gear.

“Catastrophe” from Catastrophe Keeps Us Together– The mid-aughts were an all-around difficult time, and Rainer Maria’s farewell studio LP was in many ways a Bush-era downer. But damn if it doesn’t have a wealth of gorgeous moments, like the title track – which thankfully made its way into the band’s Bowery Ballroom setlist on New Years’ Eve.

“Tinfoil” from Past Worn Searching– While Look Now might be Rainer Maria’s definitive album, the amazingly cathartic, insanely catchy “Tinfoil” from its 1997 debut is its definitive song. It’s what the band played at the end of its final Philly show in the basement of the First Unitarian Church in December of 2006. It is so fun to scream along to in a concert setting. The chance to do that again will  make this show worthwhile in itself.