This week, local legends in the making Screaming Females capped off their first decade as a band with the release of the rollicking Rose Mountain. As slick and snarling as anything they’ve ever done, it makes a strong case for being the trio’s best work yet. In preparation for what is sure to be a righteous release show tomorrow at the First Unitarian Church, I caught up with singer-guitarist Marissa Paternoster, drummer Jarrett Dougherty, and bassist Michael Abbate to chat about their new record, moving to Philly and their last ten years playing together.

The Key: So Rose Mountain (out via Don Giovanni Records) is kind of a landmark release. It marks ten years since you guys started the band. What would you say has changed for and amongst you three during that time?

Marissa Paternoster: A lot of things have changed. The fact that we live off of playing in our band, for the most part, was a big change for us about halfway through our career. That was something I don’t think we ever expected but we all wanted to happen. Other than that, the way that we tour and make records and write music hasn’t really changed that much. We still travel in our van with a roadie, load our own gear out, sell our own merch. We definitely have more people who help us with setting up interviews and booking tours because it got to the point where it was just too much for just the three of us, but the most basic elements of being in a band and making music have been pretty constant.

TK: What would you say have been the key takeaways from your time together sofar?

MP: Wow (laughs). That’s a hard question. I might have to come back to that one.

TK: That’s okay. We can save that for next time. Do you have any immediate goals for the next ten years?

MP: I think we all hope we’d get to keep making music, playing shows, traveling and doing other things that excite us as artists. We’re not rolling out some kind of career plan for the next ten years, though. There’s no point in doing that because things will inevitably happen that usurp that plan. We just kind of roll with the punches for the most part.

TK: Good way to roll! Going back to Rose Mountain, a lot of the press and reviews so far have been billing this as a “prettier,” more polished record. Would you say that was the band’s intention?

MP: I don’t really think so. We definitely wanted to work with a producer, but we chose Matt Bayles (Minus the Bear, Cursive) specifically because he’s good at recording bands and not making them sound like something that they’re not inherently in a live setting. It was definitely a more produced record, because there was a fourth party offering his thoughts in the recording process. But for the most part, I think the record is relatively similar to the ones we’ve done in the past. The difference on this one is we had a lot more time to talk about songs, review them, and change things we might not have liked. There are more overdubs, different instrumentation. I think a lot of people perceive that as being a more polished sound, but that was just a consequence of having the luxury of that extra time.

TK: Speaking of time, the new album chronicles how you spent a lot of that break between albums battling mono. What was it like for you all to take such a relatively long break from touring and playing together?

MP: It was pretty long time for us because we had been touring pretty consistently since 2006 or 2007. Even though it was a blink of an eye in the grand scheme of things, it was hard because we didn’t know if or when I was going to feel better. There was no time frame that we could work off of and we had to just sit around and wait. It was scary. We didn’t know if we’d have to think start thinking about what we were going to do next. Of course, it was also just difficult because we like to play. Not being able to do it was heartbreaking. Hopefully, it’s behind us now.

TK: Do you guys have any favorite songs from the batch that came out of these sessions?

MP: It’s hard to say. I’m attached to all of them in different ways. I really like the last song, “Criminal Image.”

Jarrett Dougherty: My favorite song is “Rose Mountain,” the title track. It does an amazing job of being a really intense song without having to rely on volume to do it. In a lot of ways, it encompasses what we were trying to accomplish with the album, which was focusing on melody and lyrics and allowing them to shine through. I think that track’s intensity comes mostly from the vocal delivery, which makes it exciting for me.

Michael Abbate: My favorite song from the sessions is actually a song called “Skeleton.” It’s not on the album but it’s a really great song and it’s got a really amazing guitar solo. It has a lot of finger tapping. If I had to pick one on the album, probably “Criminal Image.” That song is great.

You and Marissa both!

MA: It sounds like Pearl Jam to me, and I love Pearl Jam.

MP: I can totally hear that now that you mention it. That may have swung my vote.

MA: Yeah it has a really great, really long guitar solo. I thought I counted out 32 measures on it. Jarrett says it wasn’t that many though, and it should have been longer. I can’t help but agree with him.

TK: Do you guys like to try a lot of new stuff when you’re on the road? I was just talking with Marissa about the difference and lack thereof in the recording process with an outside producer for this record. Will there be any changes in how you flesh these songs out live?

MA: Well stuff always changes. All of our songs evolve over time when we perform them live. We jam a lot, so little things we’ll do with and off of each other will mature and evolve over the course of the tour and after several years. I think that will start happening with some of the new songs as well. I can’t speak for the others, but I definitely change my parts all of the time because I get bored with them. I like to try to do something new. It doesn’t always work.

TK: What happens when it doesn’t work?

MA: If it doesn’t work, you do it again so it seems like you did it on purpose. That’s my technique.

TK: I just checked out the new music video for “Hopeless.” Really cool video directed by Lance Bangs. Whose idea and concept was it?

MA: With this one, we let Lance take the reins but Marissa was pretty closely involved with it.

MP: I initially was under the impression that Lance was just going to do it. But as the process began, I became more involved with finding a location and going out on shoots. I was living in New Jersey and found this weird, abandoned playground close to New Brunswick. When Lance was looking for locations, that was the first thing that popped into my mind. This guy re-appropriated all of this old junk to turn into a cool, fantastical playground. It was originally for disabled children but now it’s defunct, and it’s just all of his artwork everywhere. We were sneaking in late a night and filming with different kinds of flashlights.

TK: That takes me back to my college film projects.

MP: Yeah it was a bit of a challenge. Over the course of a couple weeks, we accrued a bunch of performance footage in the playground. When he sent the final cut, Lance suggested putting the digital print on 35mm and animating over each frame. So a week before the video was “due,” I got this huge reel of tape that I had to scratch out or draw over 5,000 frames. It was hard work, tedious, but also fun. And it wound up looking really cool.

TK: Now you guys are actually from New Brunswick. You have a great history with Philly and performing here. What keeps you invested in the city?

MP: Well Jarrett and I live in Philly now. I just moved here within the last year. A lot of people we know from New Brunswick move here. It’s really affordable. It’s a good place to be a working artist because there is a lot of opportunity. A lot of people I know who have made records moved to Philly after school. Places like New York can be really difficult to make ends meet as an artist or young person. Philly is kind of the opposite of that while still having a lot of great art and cool music stuff going on.

TK: Which you’ll be giving people at taste of this Friday at the Church. Anything in particular we can expect?

MP:  We’re just going to try and play the best set we can play and hopefully make people want to see us play again. We won’t have any pryo-technics or balloons or anything, but maybe that’ll change. 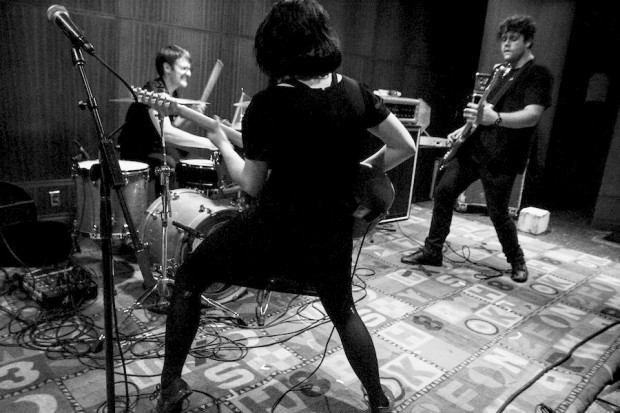 Screaming Females play the First Unitarian Church on Friday, February 27, with Priests, Tenement and Vacation. The all ages show begins at 7:30 p.m., tickets and more information can be found at the XPN Concert Calendar.