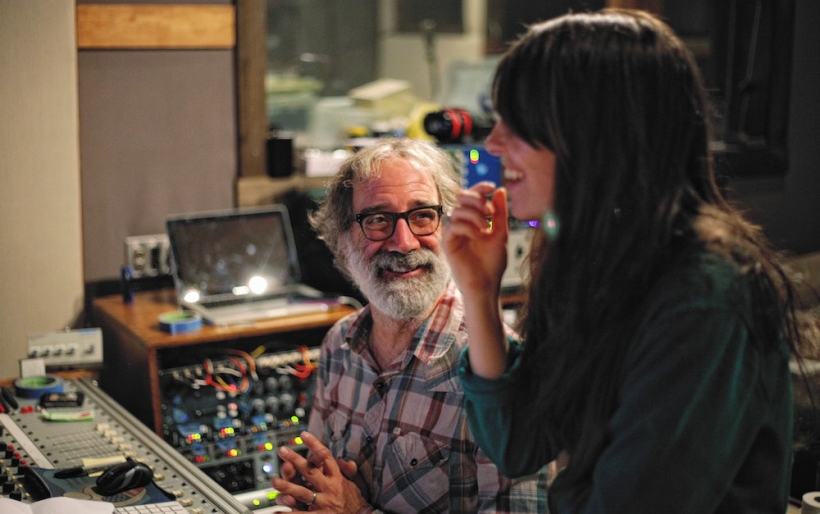 Inside Headroom Studio with Hop Along: Hear the new single “Waitress,” learn more about Painted Shut

By John Vettese
March 09, 2015
11:03 AM
Share
Frances Quinlan of Hop Along does a vocal take while recording Painted Shut | Photo by Jonathan Minto

Yesterday morning, Hop Along and I sat in the cozy B-room lounge at Kensington’s Headroom Studio, sipping pour-over coffee from Reanimator up the street and talking about music. The band was slightly nervous but nonetheless confident about the release of “Waitress,” its first new song in two years and the lead single from its new LP Painted Shut; the song is streaming this morning via Noisey as the band’s long-awaited album came to light today.

The ten-song Painted Shut comes out on May 5th, and the band is going on a spring tour in support of it – including a headlining show at Union Transfer on Saturday, May 9th. The album is Hop Along’s first release since signing with Saddle Creek Records back in the fall. And if “Waitress” is any indication, it’s a rager – and one that confronts deeply emotional situations in an exhilarating, cathartic explosion of barreling drums and soaring guitar riffs. This is something that we’ve come to know the band for. Frontwoman and songwriter Frances Quinlan doesn’t shy away from uncomfortable topics; themes of mental illness were addressed in 2012’s Get Disowned, and as our conversation yesterday indicates, they’re explored further on Painted Shut, along with ruminations on abuse, poverty and power versus powerlessness. (More on these topics a bit further down the road.)

The story inside “Waitress” stems from Quinlan’s time working day jobs in various bars and restaurants around Philly, and the various interactions that it involves her in – one in particular steeped in humiliation. “It’s about one of the first times when I looked at somebody and felt the distaste in the air,” she explains. “I mean, I could have been making it up. You don’t know what people think about you, but just being in a situation where you know someone has reason to be disgusted with you. And I was just trying to do my job. It was one of the first times I felt really small.”

The band spent a month back in the fall recording Painted Shut in the studio we were sitting in, with producer John Agnello at the board. He’s worked with a impressive roster of people over the years – Dinosaur Jr., Sonic Youth, and more recently, Kurt Vile on the Wakin On a Pretty Daze double LP – but the band reports that he remains a grounded, personable and down-to-Earth dude, and a tremendously positive force on the album. “I don’t know how I would have worked with a producer who was more like ‘It’s my way or the highway,'” Frances says. “John had a lot of great ideas, but he never forced them – he was always like ‘it’s your record, we’ll do what you want.'” Our conversation turns to the way the experience of making Painted Shut differs from2012’s Get Disowned. It was largely the same crew involved in making it: guitarist Joe Reinhart was not in the band at that point, but he did produce it at Headroom. However, that album was more freewheeling, with its production spread over a year. “I best described that album as a collage,” Frances says. “We couldn’t do it all in one shot at all because everybody had so many projects. Working with John, we knew time was not completely on our side…and we couldn’t be nearly as precious. It was a condensed experience and we played the hell out of those songs.”

“This time, it was very much a band record,” adds Reinhart. “Not people staying up all night, throwing things at the wall and seeing what sticks.”

I bring up the captivating, dream-like psych breakdown at the end of “Diamond Mine” on Get Disowned, an outro with swirls of feedback and random snippets of conversation. “And chickens,” Frances says. With a laugh, Joe adds “‘What are we going to do here? I don’t know. Chickens?'” There are no chickens on Painted Shut, the band reports, and less surreal bits in favor of direct, rocked-out songs. “We came in with [them] written and mostly finished, and went in to make the record.” At the same time, drummer Mark Quinlan reasons that the experience was probably about as expansive, just in a different way.

“Painted Shut took a long time conceptually, almost the same length as Get Disowned took,” he says. “It’s just we had to do a lot of work first and kind of channel it into the recording studio. A lot of our ideas were worked out in pre-production.”

Mostly. Though there was some in-studio spontaneity. When I visited them at Headroom back in December, Mark showed me an unusual-as-heck looking instrument: Agnello’s electric sitar. It looked like an old Gibson guitar might, except with a lot more strings going a whole bunch of different directions. Agnello brought it to Philly to see if it could be worked it to the recording, and you can hear it chiming in the first notes of “Waitress.”

At the end of this month, Hop Along is going to head out on a two-week tour with The War On Drugs, playing large theaters across the south and southwest – some of the biggest rooms Hop Along has played to date.

“The thing that’s most exciting about this is we get to live the best of both worlds back to back,” says Mark. “There are the big shows where we have very little responsibility because they’re not ours, but we’re playing to a ton of people. And then immediately after that, we play small, intimate clubs to primarily our fans. I’m really looking forward to doing both of those tours.”

Get tickets and more information on the Union Transfer show at the XPN Concert Calendar, and pre-order Painted Shut via Saddle Creek here. Below, check out the cover art, track listing and a gallery of photos of Hop Along in the studio shot by Jonathan Minto. 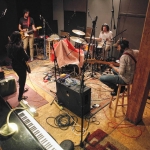 Hop Along in the studio | photo by Jonathan Minto 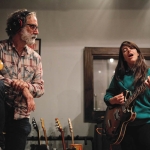 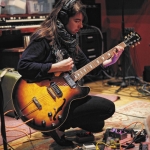 Frances Quinlan in the studio | photo by Jonathan Minto 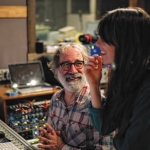 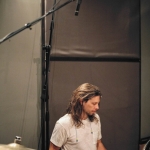 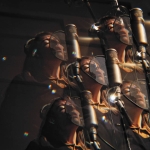