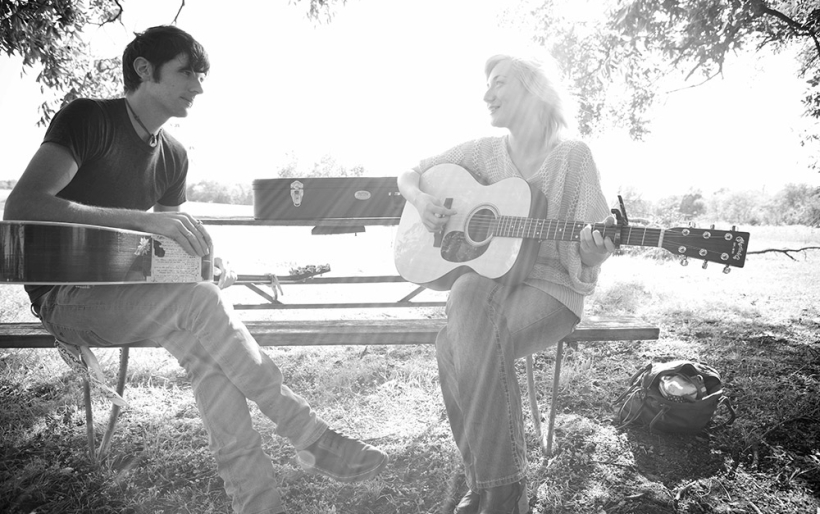 Jessica Lea Mayfield’s introduction to Elliott Smith was the song “Clementine” – some dude with a Weezer tattoo played it for her after a gig in Ohio, hoping to impress her, and she was pleasantly surprised.

Seth Avett’s gateway song was “Say Yes” – a friend wanted to learn it, and asked the singer-guitarist of The Avett Brothers to teach him.

This winter, the two musicians – both big players in the American roots / rock scene – are releasing a tribute album to the iconic singer-songwriter, who died tragically in 2003 at age 34. Seth Avett & Jessica Lea Mayfield Sing Elliot Smith is out on Tuesday, March 17th, and it’s an outstanding record (listen to it in its entirety via NPR Music’s First Listen to hear for yourself).

Over the course of twelve songs, Avett and Mayfield mix up well-known numbers with deep-cut fan favorites; some arrangements stay relatively faithful to the original recordings, others take thrilling liberties. And all around, they channel the raw emotion that lives at the music’s core.

In many ways, tackling music by a songwriter as embraced and revered as Smith is an undeniable challenge. His are songs that are somber and serious, unflinchingly addressing personal demons and toxic behaviors. But by placing them into classic pop song structures, heavily indebted to (as Smith was the first to admit back in the day) The Beatles, these emotional lows were transformed into something uplifting, and Smith’s music became for many – myself included – a beautiful beacon of hope during troubling times.

“He’s got a songwriting style thats very unique,” Mayfield explains when I catch up with her and Avett by phone. “His lyrics are really out front and honest.”

Avett points to the opening line of “Say Yes”: “I’m in love with the world through the eyes of a girl / Who’s still around the morning after.” It’s a lyric that’s at once dejected and optimistic, and is paired with a bright, ascending major key melody.

“It’s such an active, amazing, sort of fun melody, and I’m always attracted to melodies like that,” says Avett. “It’s that Beatles influence, that pop music influence but immediately matched with an obvious reserved vocal style, some darkness in there but a poppy melody line. That’s a great mixture for me.”

Hearing the artists nerd out about Smith’s songwriting, their bond over his music is evident. Talking to them in general, their friendship is very clear too: our conversation is punctuated with jokes and memories, Mayfield finishing Avett’s sentences and vice versa, storytelling tangents and plenty of laughter. When I ask how they met, Avett immediately responds “Well I was getting a Weezer tattoo…” Mayfield was unable to maintain her composure as she added “We were both in a tattoo parlor in Ohio, even though I wasn’t old enough.”

Actually, they met while the Avett Brothers were on tour in Canton, Ohio in 2006 and she opened; they’ve subsequently done numerous gigs and tour together over the years. But the shared love of Elliott Smith wasn’t immediately evident. “We’d had plenty of conversations over the years that didn’t involve Elliott Smith,” says Mayfield. “And now it’s like every conversation.”

“Yeah, talk about immersing yourself in a body of work,” adds Avett. “it’s a record, it’s part of a tour now, it’s just this crazy life experiment to delve this far into one person’s vision.”

Avett recalls hearing Mayfield sing “Twilight” as the “eureka” moment – the two covered it at Oakland’s Fox Theater during a show in 2011, and as he says, “I knew immediately in me that, oh man, there’s gotta be more of this.”

“You turned it into a project,” Mayfield laughs. But they both agree that it was less of a project and more of an obvious happening; we both love Elliott Smith, so of course we’re going to record some of his songs. It’s even a double homage, considering that Smith himself was renowned for performing cover versions of songs he loved, such as his version of “Thirteen” by Big Star.

The next question was where to start: Smith has a robust body of work, including five LPs released during his life, the posthumous From a Basement on a Hill – from which a third of Sing is drawn – the rarities double LP New Moon, as well as any number of unreleased songs floating around in the ethers of the internet. Avett and Mayfield decided early on that they couldn’t even think about the enormity of those options going into the project.

“We went at it piece by piece and let each selection be born out of those superfan conversations,” says Avett. “‘I love this song, I love that part where the drums come in!’ That was the haphazard evidence that it was something we should maybe pursue. ‘You sing this part, I can sing that part.'”

Basement is an album both artists “have this love affair fascination with,” so it was their starting point; from there, they worked their way backwards, though Avett said they could have easily kept going. “We love all of his work, but there’s kind of a miracle there’s only four [songs from Basement].”

Though hyperfans will note that no songs from Smith’s seminal, aching 1995 self-titled album made it into the project, Avett and Mayfield both say that it wasn’t for any ill feelings towards that record – or apprehension over covering material so harrowing. It was because the songs that worked the strongest came from elsewhere. (They say that the live set, which comes to The Keswick Theater this Saturday, March 14th, includes covers from the project that did not make the record.)

Listening to Sing, it seems that many of the acoustic-oriented Smith songs – the waltzing “Between the Bars” from Either / Or, where Mayfield takes a haunting lead vocal, or the rambling “Let’s Get Lost” from Basement, where their voices blend in moving harmonies – stay the closest to the versions made by Smith. Others are transformed: “Somebody That I Used to Know” from Figure 8 goes from a sprightly fingerpicked folk song to a country rock barn-burner (download it here); “Roman Candle,” kind of a dirgey Smith song from his album of the same name, is reinvented as a grungey rager not dissimilar from Smith’s formative band Heatmiser.

If you ask them, though, even when their versions sounds similar-ish, they’re all new considerations from Smith’s originals.

“I think that a lot of times, interpretations need to read as interpretations and don’t make sense as Xerox copies,” explains Avett. “The reality is, if you’re tapping into your own personal inspiration and your own actual character, it’s going to be impossible to make a Xerox copy. Even if we attempted to make exact copies, just having it be us, Jessica’s voice and my voice, are going to make them feel relatively different.”

“We tried a lot of different things too, just out of the fun of it and trying to feel out what’s natural for us,” says Mayfield. “Seth produced the record so he had a big hand in determining the arrangements, which was kind of fun for me to see how the process came about in his mind.”

“If there’s a certain part of the song that’s working, you want that part to shine,” concludes Avett. “And with Elliott Smith songs, it’s hard because there are a lot of parts that are working simultaneously.”

But he has no need to worry; their homage shines tremendously.

Seth Avett and Jessica Lea Mayfield will perform at the Keswick Theater in Glenside on Saturday, March 14th. Tickets for the show are still available and more information can be found at the XPN Concert Calendar.