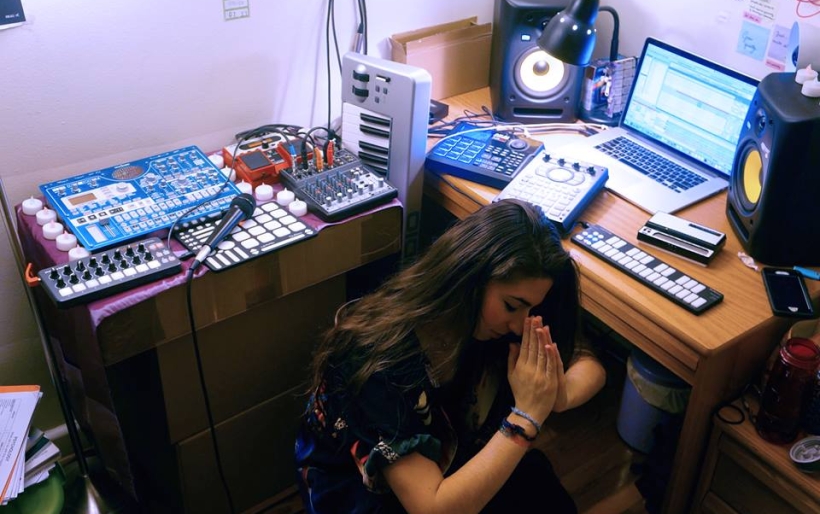 At the age of 21 Arielle Herman is a vibrant and peace-loving girl with a brain to boot. If studying neuroscience at Haverford College by day wasn’t enough, Herman transforms herself into the lustrous and abstract singer, songwriter and producer Qualiatik by night. Stemming from the idea and grand scheme of communication and perception, the definition of qualia represents both her endeavors and her musical persona.

Except the grand difference many of us see between her two passions she ensures are actually one in the same. A product of both passions coexisting together is what gives this girl her direction (or lack there of, as we joked about during the interview). In the midst of receiving a grant to push neuroscience advancements along while at the same time being part of a tight-nit competition with counterpart band Twiin for Deli Mag recognition, Qualiatik sat with me to discuss her creativity and just what about this connection influences her the most.

On neuroscience and musical connection:

Arielle Herman: I have always been a visual artist and really into the mind.  From my perspective you can’t really separate the brain and art and music.  Everything about our music is processed by the brain so there doesn’t seem to be a distinction for me.  I think I’m more of an intellectual and Qualiatik for me is more of an intellectual endeavor.  A lot of it has to do with my own personal development and edification, but the by-product of that is just making stuff that looks and sounds really cool.

On her upcoming neuroscience project:

Herman: I actually received a grant to do a performance that unites neuroscience and music.  I have this circuit board thing that connects to your head so you could look at your brainwaves on the computer, its pretty crazy.  I just made a website for it last night.  It’s cool cause I have some friends up in New York who are going to join me on stage and perform.  But yea it’s a weekend in April and we’re just going to be playing music for two nights and people can come up to a station and get electrodes put onto their brains and their brainwaves will project on the wall.  I’m also going to read the brainwave information as like audio information and put it into two different visualizers.  So it’s going to be a space with cool shit happening, I’m realizing it appeals to a wide audience. My old professors I told to come out say they support it and my friends are just like ‘Yo that’s fuckin sick!’.

On meeting the band Twiin:

Herman: I was at a party in Philly and they were there too. It was so funny.  I went upstairs to go to the bathroom and this man walked out and was like ‘What’s your name’.  [Laughing] I was so stunned and told him Arielle.  He just kept looking at me and was like ‘No No what’s your real name, your musician name’.  I told him Qualiatik and he asked if I was in an intense competition with another band and it turned out being him.  It’s funny because now we’re like homies, we were talking about doing a show together.

On “Champagne” and work ethic:

Herman: This pretty big Soundcloud account reposted [my song “Champagne”] so I’m like afraid to post another song in fear that it won’t get the same recognition [laughing]. But yea “Champagne” is the first song that I really feel good about.  It doesn’t capture everything I’m trying to accomplish in music but I think my skill-set and production is a lot better.  I made the whole song in a week, I didn’t sleep for like a week, I think I actually worked for 20 hours straight. I’m like that with everything though.  I become consumed with something and don’t stop until its finished even if it takes like forever. But yea “Champagne” is really the first song that wrote itself, all the other songs were me really teaching myself how to use the software Ableton.  I learned you can’t punch at a song it has to come naturally.

Herman: I wasn’t thinking about her when I was writing it but I think when I was recording the vocals at like 6 in the morning there was some part of me that was like channeling Lana Del Rey [laughing].  But yea I listen to a lot of random things on Soundcloud.  I’m really into the progressive rock band Yes, and that’s all my dads doing. He got me into that stuff.  I love Mariah Carey [laughing], but growing up I listened mostly to rock and alternative rock kind of stuff.  I guess you could say that influenced me to a degree. I go through phases, there was a period where all I listened to was witch house and industrial music and now the last few weeks its been like PC music.

On being recognized and approach to neuroscience:

Herman: People have been recognizing me and it’s been like really bizarre, I just don’t know how to respond to it but it’s cool. It’s awesome too because my musician friends have been showing interest in my upcoming neuroscience project. Being in an environment of musicians but also being able to talk about my neuroscience interests is the best, because I don’t approach science like a conventional scientist, I approach it like an artist.  I just have a different state of mind about it and being in a setting that’s not academic and being able to talk about things that are academic and doing it in a way that captures the interest of people is a really rewarding experience.

On going to LA this summer:

Herman: I just look to do a whole bunch of performances over there, I know a lot of people so hopefully it will all be good.  I also want to work in a neuroscience lab there, I figure most artists and musicians have a day job that they don’t really like so I thought it would be cool if I had one that I actually did.  Everything’s very up in the air though, I just like going through the motions. That’s the exciting thing, I’ve always lived on a schedule and a certain structure which I think doesn’t really work for me. I think going somewhere and having like no strings attached to anything will be very refreshing. I don’t know what happened, I think I just turned 20 and was like crap! I’m not doing what I need to be doing with my life.  Then I decided to start producing and it completely changed my existence.

Qualiatik is definitely a girl way beyond her years. Along with dishing up tracks like “Champagne” that have captivated us, she also looks to use music to advance the neuroscience field of study.  Placing 2nd in the Deli Mag spotlight contest this full time college student isn’t even close to the cusp of her success.  The creative brain behind her own artwork, production and lyrics made sure to stress that she is not one dimensional by any means.  With earthy, ecstasy-enticing trances this artist’s greatest strength is her ability to stay away from concretion and allow everything to take shape before her eyes.