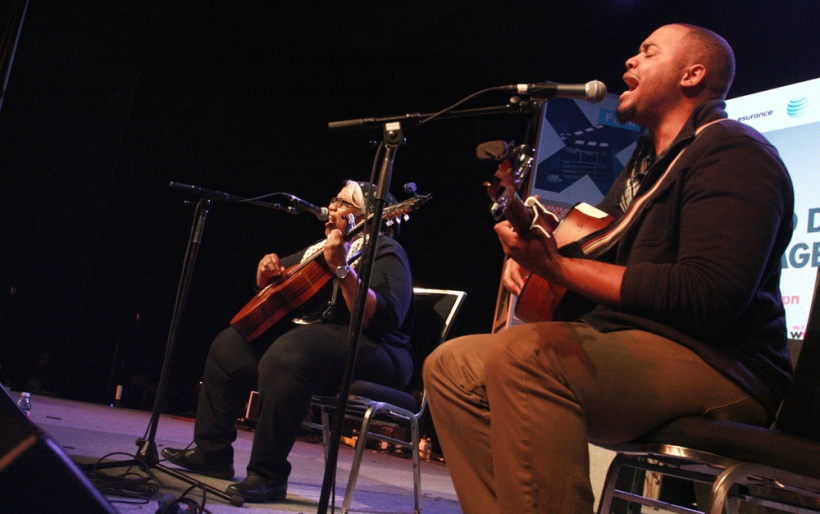 Madisen Ward and The Mama Bear | Photo by John Vettese

The seven best bands I saw at SXSW

Thousands of bands convened in Austin, Texas last week for SXSW. Of the 20 or so bands I set out to see during my three days at the conference, I managed to see about half of them. While many attendees go with a list of bands they most want to see; there’s an aimless serendipity that happens at SXSW, when you’re heading down the street to see one band, it’s often that you wind up at a completely different venue seeing another. One is redirected by texts from friends on their way to see a hotly buzzed band, or a quick swing into a coffee shop will lead you to running into folks who tell you about a not-to-be-missed acoustic performance at a hotel ballroom, or a potential surprise guest appearance by a superstar (like Miley Cyrus at the Fader Fort), that you’ll wait an hour in line for at a venue to see. My hit list this year was driven not by serendipity (save for the disastrous, yet awesome Miley appearance), and more by focus to see the handful of bands that I wanted to see in my limited time at SXSW. Here were my favorites:

British rockers Wolf Alice’s lead singer and guitar player, Ellie Rowsell, is a vacuum of charisma. She and her band do the American Nineties alt-rock quiet-loud thing really well, with complicated arrangements that capture and sting you as great rock and roll should. And she can howl like the best of them.

Of all the hip-hop I saw at SXSW, Kate stood out by far as the most interesting and engaging. At a very crowded show upstairs at Maggie May’s on Friday night, the rapper and award-winning poet delivered a fierce set of songs from her recent album, mixing spoken word, bass heavy hip-hop and grime beats. With her long wavy blonde hair and her cherubic face, she strikes a completely incongruous position on stage, which makes seeing her live quite amazing.

Madisen Ward and the Mama Bear
The mother and son duo from Kansas City played a number of shows including WXPN’s Radio Day Stage event on Friday from the Austin Convention Center. With just two guitars and two soulful voices, Ruth and Madisen Ward delivered a heartfelt, authentic and completely pure and touching set of folkie, bluesy acoustic based songs.

I ran into Seinabo Sey just hanging out on the street in front of Cedar Street, several hours before I saw her perform. A mutual friend introduced me to her as being from Philly and she said one of her favorite singers was from Philly. “Who’s that?” I asked her. She said “Jill Scott.” That was all I needed to know when I saw Seinabo’s soulful set of modern music. The Swedish musician’s set was exhilarating, a mix of dance music, rock, and electonica that was soulful and unique.

There wasn’t a single music industry person who told me they weren’t blown away the Lititz-to-Philly rock and rollers The Districts. I didn’t have to even ask the fans who were at their mid-day show at the Hype Hotel last Thursday. Lead singer Rob Grote came to rock and took no prisoners, giving his very all to a crowd that was amped up in the middle of the day. With high profile sets at the Fader Fort, the Hype Hotel, and Rachel Ray’s party at Stubb’s, the band reaped well deserved accolades from Spin and Rolling Stone.

The Ft. Worth, Texas R&B singer was one of the most buzzed about artist to see at SXSW. Bridges signed to Columbia Records several months after he posted two Soundcloud songs that he worked on with Austin Jenkins and Justin Block of White Denim. A year ago, he was washing dishes at a restaurant and playing music on the side. Critics are hailing him as the next Sam Cooke, and while Cooke’s music is definitely a reference point, at his midnight showcase at the Hype Hotel, Bridges performed with a large band that included several back up singers and a horn section, and he came off more like Jackie Wilson and Usher than Cooke. What matters is his confidence, and the effortless charm of his performance. Within moments after he started his set, the capacity crowd was dancing and smiling, as he led the band through songs from his forthcoming debut.

Finally, even though I’ve seen her several times before, Courtney Barnett’s set at WXPN’s Public Radio Day Stage was outstanding. It was the last of eight shows she performed during the week, and the band was excited to be rocking in the vast Austin Convention Center ballroom, having rushed over to play after a set in the rain that covered Austin most of Friday.