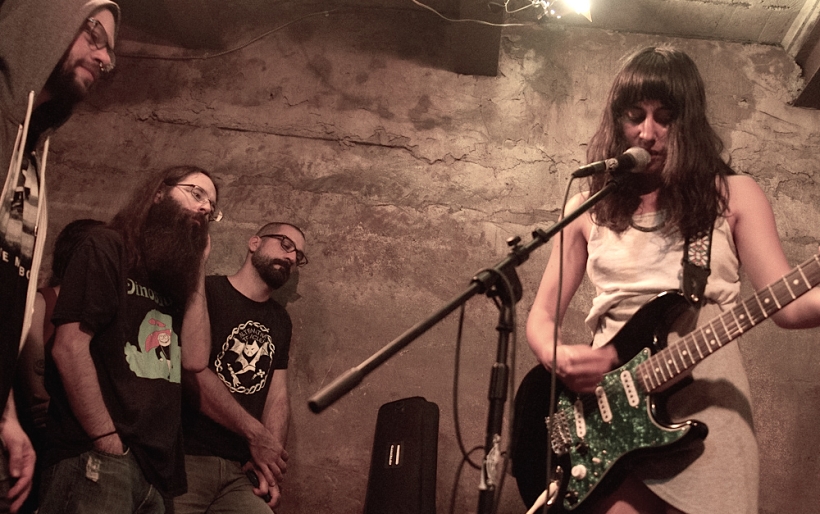 Breaking Down the Boys’ Club: Why PhilaMOCA’s She Shreds showcase is so necessary

On April 4 at PhilaMOCA, this revolution will be on stage in full force, as Portland, Oregon’s She Shreds magazine hosts a celebration of musical women in Philadelphia. On the bill are rock stalwarts Swearin’ and Amanda X, punk heavies Mannequin Pussy, and power poppers Anomie (a solo project of Field Mouse’s Rachel Browne), along with DJ sounds by DJ SAD 13 (Sadie Dupuis of Speedy Ortiz).  [Girls Rock Philly band Jane Doe was scheduled but unfortunately had to drop out.]

It’s an event that will highlight a Philadelphia scene that excels in its acceptance, support, and diversity, one that can be held up as a model for the musical landscape at large.

She Shreds’ stated aim is to combat the underrepresentation of female musicians through, as its mission statement reads, “educating, inspiring, and encouraging future and current musicians” and in order “to cultivate the presence of women in the music industry.”

“There are a lot of opportunities for women, but they’re different—not as prominent, important, impacting,” says Fabi Reyna, She Shreds’ founder and a veteran of bands such as The Ghost Ease, Newman/Schonberg/Reyna Group, Reynosa, Sexhair, and Chain & the Gang. “Women have to prove themselves, work twice as hard, the same as any woman in society. You can say there are fewer opportunities for success in the current landscape, but I think what’s being generated off that is that we’re just making our own shit happen, creating our own worlds and ways of succeeding.”

The bands highlighted at PhilaMOCA have all been involved in the Philly DIY scene that they themselves have helped create. Some, like Anomie and Mannequin Pussy have moved to Philly after basing their bands in New York City. Some, like Amanda X, are Philadelphia-area born and raised. All of them, however, extol the virtues of the Philadelphia DIY community and its allegiance to the values and ideology supported by She Shreds.

Says Cynthia Schemmer, managing editor of She Shreds, New York transplant, and member of Philadelphia’s Radiator Hospital: “I feel like every show I go to there’s a band of women or there’s a woman in a band. I just feel like it’s way more supportive than the scene I was involved with in New York and definitely way more encouraging.”

“What I’ve experienced in Philly, the DIY scene has been a particularly good place for women,” adds Browne. “It seems to be a pretty nurturing community for everybody. It’s really LGBT-friendly and very supportive of everybody, regardless of gender, race, orientation.”

Unfortunately, the example set in Philadelphia is not typical across the country. Sexism, misogyny, and the marginalization of women is as rooted in musical history as the blues, and too often female musicians are still confronted with bias and differential treatment. When asked what she’s encountered in her travels, Browne laughs, saying simply: “Oh my god. You can just put a laughing emoji in this section if you want. So much. From the beginning of time.” The stories start to sound all too similar. “You always deal with funny bar venue people,” says Cat Park, DelCo native and singer/guitarist for Amanda X. “The security or whoever is running the show might not think of you as the band. They might think of you as the merch girl or some sort of support.”

“I’ll get a lot of comments about my appearance,” says Schemmer. “We played in Oklahoma City and some guy came up to me after the show, and I had my hair up—I wear it in this bun on top of my head—and he was like, ‘You should really wear your hair down when you play.’ And I was like, ‘Oh, thank you for the style tip.’ That’s all you have to say to me about my performance?”

Or when Amanda X played in Minnesota on a recent tour: “When we rolled up in Minneapolis, this guy said, ‘Whoa, a chick band, cool.’ He just couldn’t compute it.”

With magazines like She Shreds and organizations like Girls Rock Philly, the hope is that the encouragement and examples provided can help a younger generation of women understand that opportunities exist for them outside of a mainstream music culture that too rarely highlights the achievements of exceptional women.

“I think that sometimes the thing that people forget about is that women, historically, have not been encouraged to play music when they’re young,” says Schemmer. “Boys are given guitars and drums and they’re encouraged to do that, but in general, women weren’t.”

“Growing up, I didn’t have a lot of female options,” says Mannequin Pussy’s Marisa Dabice, who describes her own experience wanting to play drums in her middle school orchestra and being told that drums were not for girls. “I feel like She Shreds and Girls Rock Philly are very important just to give much younger girls some people to look at that remind them of themselves. There are other girls who are interested in this. There are other people who look like me who are doing this and actively running their bands and creating music on a very regular basis.”

The Catch-22, however, is that, despite these issues still existing in the musical landscape of 2015, discussing them necessarily highlights the exact thing that most of these women want to avoid.

“Recently I’ve been getting more questions about gender in music,” says Dabice. “And it’s strange, because as a musician who is also female, it’s not the thing that you want people to focus on. The other musicians I know who are also female would love to stop speaking about gender. Whenever we address our gender, we’re also addressing this idea that we are part of some sort of novelty. And I think that at this point we have such a strong community of musicians who are of both genders, that maybe it’s not as necessary to talk about anymore.”

“We’ll see if there are changes,” Dabice continues. “Checking back on it in a couple years, do these things still happen to you, for my friends who have been mistaken for being the merch girl and not the musician? Because if not, then the conversation has been beneficial. If so, then I don’t know what’s going to change it. I think maybe having some people on the cover of Rolling Stone who aren’t fucking robot pop singers would really help….I really want to see the day where we have the big music magazine where they have the all female issue, to just not have that on the cover. Just to have the issue and maybe the majority are women, but not to use that as a signifier.”