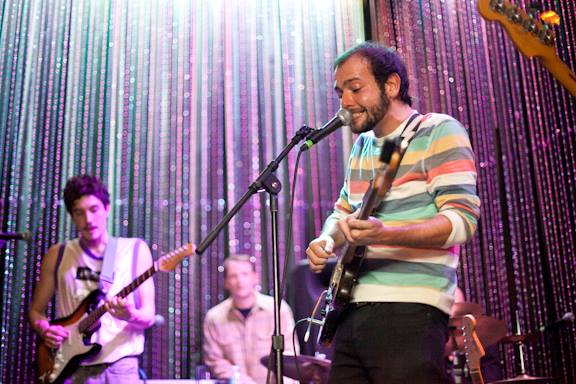 Local psych-pop project Aunt Dracula has rolled out a remix record of songs taken from 2009’s Face PeelLP, a release that was halted, rushed and surrounded by less than ideal circumstances. For the flip-side Peel Face remixes, Dracula songwriter Scott Daly teamed up with Prince Rama, Eric Copeland, Pictureplane and more to show the songs’ multiple personalities. We spoke with Daly about the Face Peel / Peel Face journey he’s been on since 2009, how a sudden illness put the project on hold and what the future has in store for this ebullient, experimental band.

“Face Peel is a record that has a lot of drama woven into its backstory. [It] was put out in a rush without shopping to labels and I always felt it didn’t get a fair shake. I always hoped it would reach a wider audience.”
On the brink of moving to LA in 2009 in order to give the record another shot at exposure, Daly ended up back in school until 2012 and put Face Peel on the back-burner.
But when the calendar flipped to 2013 Daly felt it was time push the Animal Collective-esque freak-pop tracks again, reissuing the record and reforming the Aunt Dracula band, though he had been working on other material during the band’s downtime.
“All in the interim, I was working on the followup to Face Peel…. There is another Aunt Dracula record that is fully composed and has a title and everything. All I can really say is that it’s been in the works for a long time and the only thing stopping me from finishing it is money.
Sitting on a small stepping stone between Face Peel and that next record is Peel Face, a project that was  conceptualized during the rebuilding time of 2013.
“I always liked how the band Swirlies did the double LP for the They Spent Their Wild Youthful Days in the Glittering World of the Salons. One LP was the record and one was a remix record. I had the idea for reversing Face Peel to Peel Face for the remix record, kind of like a remix of the title.”
Lately, though, Aunt Dracula’s progress has been somewhat halted again due to a sudden illness that affected Daly last spring, sending him into a cycle of hospital stays and rehab that has lasted the better part of a year.
“My father found me lying on the floor of my apartment and called an ambulance, which needed to wheelchair me out of the apartment building because I couldn’t walk. I was [eventually] diagnosed with pneumonia and encephalitis (a rare traumatic brain injury). My voice and balance are still not 100%, although I have two more months of rehab remaining.”
Despite the setbacks, Daly has continued to move forward with Aunt Dracula material and we can hope to get some glimpses of it soon. As for the next record:
“When I fully recover, it will definitely see the light of day.”
Listen to a stream of the Peel Face remixes below and keep tabs on Aunt Dracula via Facebook.
Related Content
View All Related Content