The Return of The Tough Shits: Hear a new song, catch them at Repo Records this Saturday - WXPN | Vinyl At Heart 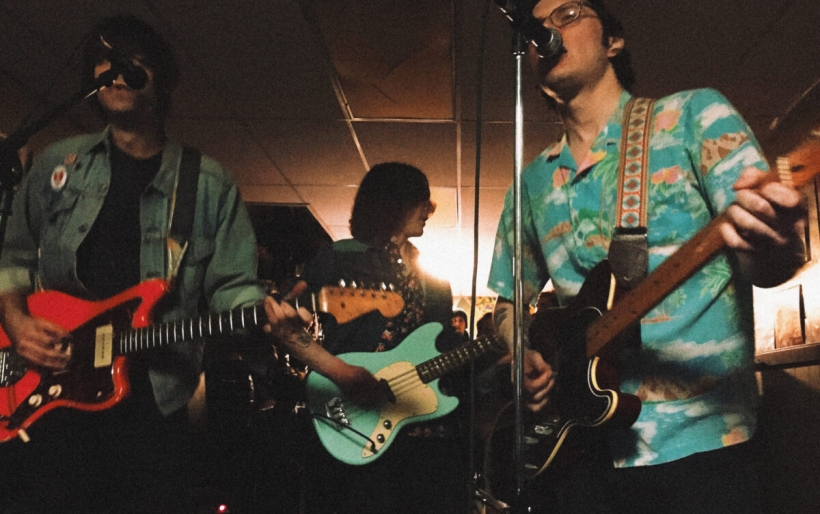 The Return of The Tough Shits: Hear a new song, catch them at Repo Records this Saturday

The Tough Shits recently played a show at Beautiful World Syndicate, a record shop just down the street from the bar we’re meeting at. It wasn’t was very publicized, and lots of their longtime fans could’ve missed it if they didn’t catch the Facebook note the group posted eight hours before showtime. There was no setlist because they never make setlists, and there were mistakes because they admittedly always make mistakes.

That show has helped the Philly band – who are quietly emerging from the several-year hiatus that immediately following the release of their self-titled debut – devise a plan for this weekend’s Record Store Day showcase at Repo.

“This time John will realize what’s wrong with his guitar after the first song instead of six songs in. I will remember all of the words…” singer/guitarist Mark Banfill begins.

“I’ll remember the break in, uh, what is it called… ‘Here Comes the Moon?’” drummer James Horn asks.

“And when I turn around to look at him when he forgets it, he will be paying attention so that we make eye contact. And if John gives me a dirty look for trying to get James to stop, I will pay attention to that,” Mark goes on.

“It wasn’t a dirty look. It was more like I was trying to figure out if you were actually trying to actively derail the song,” John Heald (lead guitar) baits. “…Other than that, no big stunts or anything planned but we don’t plan stunts.”

“We don’t plan anything,” James finishes. The Tough Shits | Photo by Grey Haas | courtesy of the artist

The guys play messy, bashing garage rock. They have a deal with Burger Records, the top purveyor of music for big time beer can crushers and shitty tattoo-havers. And they’ve been going at it a lot longer than the trend has.

There’s a lengthy line of bits and pieces that make up the current structure of the group. John and Mark started playing together in 2003. They’ve known James for the past 15 years, and practiced in his bedroom before he was part of the band. When the group’s original bassist moved to Florida, they brought on Max DiMezza to fill in, but not before a year-long, low key breakup.

“The band wasn’t functioning,” John explained, “We weren’t doing anything so we weren’t checking our emails.”

“I will say we are legitimately non-careerists… we don’t expect success, so we don’t build on any success or we don’t pursue success but we do try to make good music because it’s very satisfying, and that just works. And that’s the only way we’ve ever had any success.”

Mark clears that up: “I have worked as a projectionist-slash-manager at the goddamn Riverview movie theater for 12 goddamn years of my life. That is in no way depressing. It is an honor, a privilege a pleasure and I love life.”

And then laughing. Lots of laughing. I think these guys have spent the past decade laughing. On a more serious note, they’ve all got valid, concrete reasons to be in this band and play this music. John says he does it because that’s all he knows how to do, Mark says they’re all lifers, Max says the Tough Shits was his favorite band before he was in it, and James says he just wants to practice playing the drums and that if a better opportunity came up he’d probably leave.

“There’s nothing calculated about this. We do it backwards, man, we do it wrong every step of the way. It is music, I will say, for fuck ups by fuck ups. And I think that resonates,” says John.

Fuck ups who owe us a lot of unreleased tunes. Listen to the exclusive premiere of the sunshiny, shout-along punk song “Action Breeze” to start, and don’t miss them when they play Repo Records this Saturday afternoon with Girlpool, Gondola, Witch Fist and more.