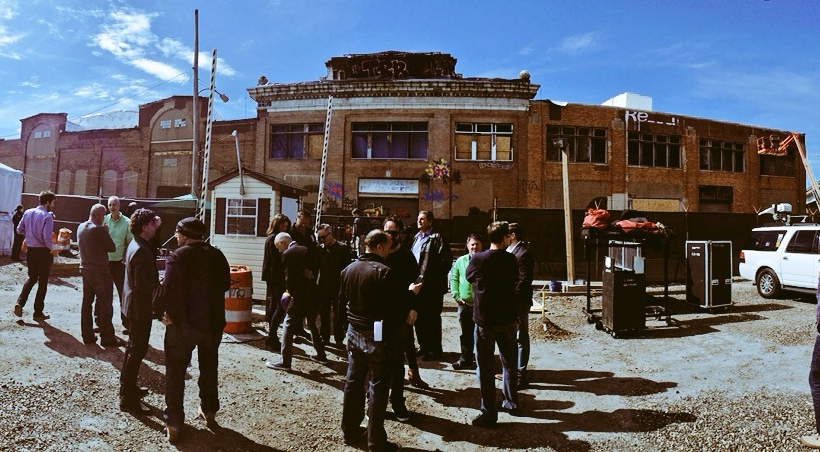 A crowd stood on the outside of an iron fence and stared up at an old brick industrial site where, up until now, nobody goes in and nobody comes out.

There were definite Charlie and the Chocolate Factory vibes in the air yesterday morning – or maybe that was the table of Federal Donuts talking – for Live Nation’s press conference announcing Fillmore Philly. The new live music venue slated for a fall opening sits at the end of Frankford Avenue, at the bustling cultural / entertainment nexus of Fishtown, Northern Liberties and Delaware Ave.

Plans for the Fillmore seem like it will combine elements of all those neighborhoods: a rough-hewn artful exterior and a selection of craft beer and food inside, plush and loungey atmospheric elements with a chandelier-ed “Circle Bar”, a bit of loud nightlife bombast (if the pre-press conference playlist, featuring The Neighbourhood, Walk the Moon and Kongos is any indication of their bookings). Like Roald Dahl’s fantastical factory, there’s a bit of everything-at-once-ness to the plans, and a definite air of mystery – or questions worth pondering at any rate. But first, let’s stick to the facts.

The venue, which has been rumored for going on five years now, will actually comprise two live rooms: a larger main stage that’s scalable between 1,000 capacity and 2,500 capacity, and the smaller 450-capacity “Foundry” stage which will focus on singer-songwriters and up-and-coming touring artists. There’s a mezzanine and the aforementioned Circle Bar connecting the two spaces, which Live Nation’s Rob Bension told reporters would be open before and after shows, serving craft beer selections from Yards and Victory as well as food. Catering crews handed out samples of sliders and directed people to a charcuterie table; vegan options are reportedly in the cards as well. Basically, it’s a space that encourages concertgoers to come early and stay late. Which is a good thing, since it’s not immediately clear how parking is going to fare at this new venue. Press conference attendees were directed into a lot under I-95, not unlike those near the Riverview in South Philly. If this was indeed the venue’s lot and not just a temp space for the day, it will be totally workable with a smaller crowd, potentially awkward when packed. Fortunately the Fillmore is right along the 15 trolley line, a short walk from the Market-Frankford El’s Girard stop, and has plenty of bike-locking potential in the surrounding blocks.

The 127-year-old Ajax Factory that will become the venue begins its transformation this spring, and the exact opening date is TBD. “Working to transform this metal and munitions factory into a music venue has been a labor of love for us,” said Bension.

Mayor Michael Nutter was also on hand, and talked excitedly of the project, saying “This is about jobs, it’s about revitalization, it’s about music, it’s about fun.”

There’s also the question of where this space fits into the venue landscape of Philadelphia, and whether another venue in a city of emerging venues is really necessary – a conversation that’s played out ever since the Fillmore was in the idea stage, when all Philly knew was that national concert promoters Live Nation owned this building and were planning something with it.

The first question is a bit easier to answer. With one room that can be anything between 1000-cap and 2500-cap, it fits snugly into that middle ground between two of Live Nation’s other Philly venues, the 1000-cap TLA and the 3000-cap Tower Theater. As the Philly Weekly’s Bill Chenevert pointed out, the venue that is likely in the most direct competition with the Fillmore is the Electric Factory. Neighboring Fishtown / NoLibs spots Johnny Brenda’s, The Barbary and Ortlieb’s – not to mention MilkBoy in Center City and Boot and Saddle in South Philly – are intimate enough rooms that an artist would have long outgrown them by the time they’d play the Fillmore’s smaller Foundry stage. Likewise, even though World Cafe Live and Underground Arts potentially might fish in the same pond as the Foundry, both those spaces reach much bigger capacities…but not quite as big as the big room. Likewise, Union Transfer and The Trocadero max out at the bottom of the big room’s capacity.

Which is all a roundabout way of saying the Fillmore is seemingly filling in gaps, bringing us to the second question – and a less clear answer. Is it necessary? There are already two rooms for artists that have surpassed that Union Transfer / Troc / TLA-sized draw; a third could dilute the pool of concertgoers. Then again, those are three rooms I mentioned right there, and all seem to be holding their own (from an outside perspective anyway). Not to mention that each of the three 1,000-cap rooms has its own vibe, Troc skewing more metal, The TLA leaning more pop and UT occupying that indie rock-centered in-between zone. So if The Tower is the more elegant room for the Ryan Adamses and the Tallest Man on Earths, and the Electric Factory is the clubbier zone for Steve Aoki and Matt & Kim, the Fillmore could similarly find its own unique identity between the two – or somewhere else entirely.

Perhaps I’m naively optimistic (hell, I started this piece out with a Charlie and the Chocolate Factory reference after all). Maybe I’m overlooking the complicated booking politics of Live Nation having a network of rooms of every imaginable capacity at its disposal, and the advantages a national promoter might have over the locally-rooted R5 Productions managing a similar network that ushers artists from Boot & Saddle to Union Transfer and beyond. (You know, the same way R5 has similar advantages over smaller local promoters who just book one sized room.)

Point is, competition is hypothetically good for business. When Union Transfer launched in 2010, The TLA and Troc didn’t go away; when World Cafe Live opened in 2005, The Tin Angel kept at it. Boot and Saddle, MilkBoy and JBs exist in relative harmony. And this growth in business directly correlates with the growth the the Philly music scene as a whole. If the Fillmore can establish its niche in a way that compliments both Live Nation’s own Tower Theater and Bonfire Productions’ Electric Factory, that growth can only continue.