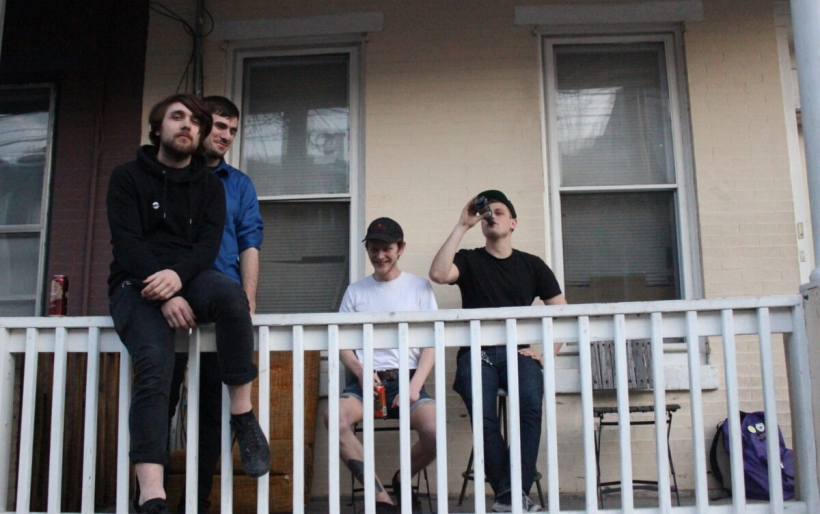 The four twenty-something guys of the Philly band Clique wanted to break in their new outdoor chairs that their friend Michael Kuhn (aka experimental percussionist Nah) trash-picked. So we sat on bassist Travis Arterburn’s porch and talked as the four-piece band smoked cigarettes and slung back a few beers and the sun began to set.

Since releasing their self-titled EP, Clique has made a name for themselves within Philadelphia basements and DIY spaces. This isn’t their first take as a band, as members of the band come from different groups formerly existing in Philadelphia.

Their sound has changed pretty drastically. Ted Nguyent was a fast-paced punk rock group, in which Arterburn played drums. Girl Scouts was straight-forward math rock and The Hundred Acre Woods had an indie folk punk sound.

And then there’s Clique: an emo rock group with dark guitar riffs and strong basslines.

Carroll and the other singer/guitarist, Brandon Shipp, have been living together and writing songs on acoustic guitar together for a while. When they were interested in making their project into a full band, they hit up Arterburn who wanted to play bass. Drummer Tom Anthony came into the mix thereafter.

“Travis and I have known PJ for a long time, but I met Brandon during our first practice,” Anthony said.

Their self-titled album, recorded by Arterburn at Headroom Studios, was released in late September and the band started getting offers to play shows nearly immediately – something they attributed to connections from their past bands.

Shipp was modest most of the interview, but admitted his shock to the quick success of the album.

“We just wanted to play shows and play music,” he said. “All the attention was overwhelming.”

“I played in this other band for four years before this,” Arterburn added. “And three months into this we were playing bigger shows than I ever played before.”

Anthony said he remembered texting Travis saying “we’re in a big band now” when they got 100 Facebook likes the day the album came out.

In less than a year of being a band, they’ve been able to be involved in a range of music projects and events throughout Philadelphia. Back in December, they played the year-end event Kat Kat Phest 3, which always brings a turnout. The festival is run by Kat Kat Records, the label who released Clique’s self-titled tape.

“Ruben and Dan (Kat Kat), I respect those people so much,” Carroll said. “I’ve known them since I’ve moved here and… [they’re] very dedicated to the kids and getting music out.”

Back in February, Clique released their first split with Philly bands Loose Tooth, Ghost Gum, and Mumblr. It featured their latest single “Wishful Thinking,” which blends heavy guitars and loud beats with melodic parts from Carroll and Ships. Their split release show was held at the First Unitarian Church, a place Carroll said he used to frequent for shows when he was in high school.

“All four of those bands were just very close friends in some form or the other or we know each other,” Carroll said. “It was a fucking party at the church.”

They’ll be invading the Church again on May 30th to open for indie punk band Glocca Morra’s (official?) last show along with Lvl Up, Greys, and Marge. They’ll also conquer the Union Transfer stage earlier in the month when they open for Hop Along on May 9th. They’ll also head out on a short tour this summer with Milo and Old Gray, and will re-issue their debut on vinyl via Broken World Media.

“It’s the first band that I’ve been in where we talk about the future,” Anthony said. “What do you guys wanna do 6 months from now? What do you want to do a year from now?”

And maybe that’s another reason these guys have been so successful. It’s their second time around and they already know the ropes, what works and what doesn’t. It’ll be cool to see where these guys go next. They’re working on a new full-length right now, which Anthony described as “moodier.” In the mean time, check out their music video for “Fade,” and get info on their May shows at the XPN Concert Calendar.