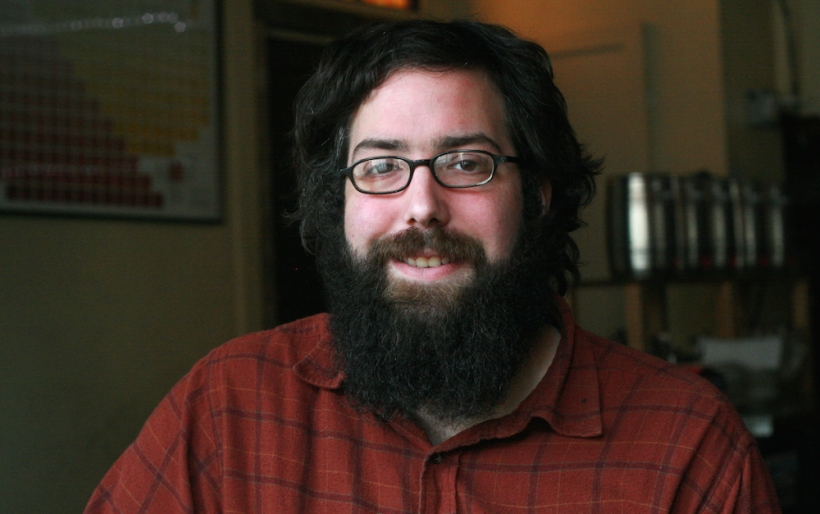 The search for Gene Shay’s successor is over. After three months with a variety of interim hosts, Ian Zolitor was named the new permanent host of the WXPN Folk Show today. He will host the weekly show on Sunday nights from 8 to 10 p.m.

Zolitor, 30, has been Shay’s production assistant for the past two years, but his ties to the folk world go back much further.

“I grew up going to the Philadelphia Folk Festival,” Zolitor tells me over coffee at Earth Bread and Brewery, not far from his East Mt. Airy home. “I listened to Gene’s show on my radio. And my dad had boxes of tapes of Gene’s show from before I was born, so I also listened to those, developing my musical taste from that.”

He came on as Shay’s production assistant in April of 2013; as Zolitor puts it, he simply approached him out of a desire to learn more about folk music and folk radio. He hung out, observed and helped out where he could, and as he spent more time at the Folk Show, he became more hands-on, operating the broadcast sound board and coordinating live guests.

Reached at his Lower Merion home, Shay says he is “thrilled and delighted” that Zolitor would be following in his footsteps. “He has the interest, he has the knowledge, the background and the disposition to continue what I tried to do with the music I love,” Shay says. He describes Zolitor as humble, friendly, eager to turn to Shay for advice and well-versed in folk.

Zolitor credits growing up in a very musical household with his interest in folk. “My mom plays guitar, piano and banjo,” he says. “We always had copies of Rise Up Singing in the house, which is pretty much the folk song bible. People would always come over and page through it, and growing up, I was exposed to a lot of group sings and gatherings.”

Growing up, he attended the Crefeld School in Chestnut Hill, an alternative school with a strong emphasis on music education; his teachers were singer-songwriter Ben Arnold and versatile Philly percussionist Hoagy Wing, two people Zolitor describes as very influential and supportive.

“They inspired us to pursue music but in a different way other than just playing it,” he says. “They wanted us to find ways to make it our career.”

He says one of the most important things he learned from Arnold and Wing is how to collaborate through song with other musicians. “A lot of people are really accomplished players, but don’t play well in groups,” he said. “They taught us how to really come together through music.” 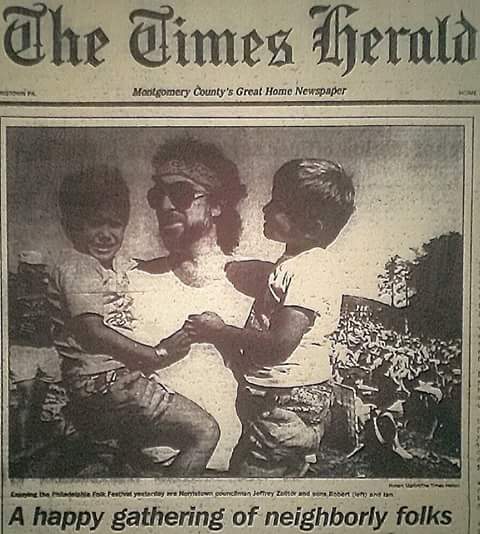 Ian Zolitor, left, photographed at Folk Fest with his father Jeffrey and brother Rob, on the cover of the Norristown Times Herald in 1989

The Philadelphia Folk Festival is another influential force in Zolitor’s life, and he’s been attending since he was an infant. “Going on to that ground, it really gives me the sense of going home each summer,” Zolitor says. “My earliest memories are of drifting off to sleep on the field while hearing this fantastic music in the background.”

He says some his favorite festival memories are seeing the late Utah Phillips, numerous sets by Richie Havens, and catching the influential John Hartford before he passed in 2001. Hartford remains a personal favorite musician of Zolitor’s, and his current Facebook profile photo is actually modeled after Hartford’s 1971 album Aereo-Plain.

But his favorite moments at Folk Fest are often discovering the artists he’s never heard before, or taking part in the campfire jams until the early hours of the morning.

“Because if the way it’s set up, Philadelphia Folk Festival is always a musician’s festival,” Zolator reasons. “At other festivals, the main stage shows run until 4 a.m.; at Folk Fest, they’re done by midnight so people who aren’t onstage will continue playing music themselves all night in the campground.”

Beyond folk music, Zolitor takes in a range of artists and styles. He recently hosted a house concert paying tribute to The Velvet Underground; he’s also a fan of old soul from Stax Records and beyond. As Percy Sledge plays on the radio in the background of the restaurant we’re sitting in, he says “To me, there’s a lot of crossover in the feeling and emotion between folk and soul. And the music transcends the grittiness of folk.”

In the Folk Show, he plans to stretch that definition. He says he’ll pull from a 100-year span of artists and recordings, from the early 20th century to present day.

“I really see myself as bringing a degree of education within the folk show,” Zolitor says. “I try not to expound too much between songs, since people are listening for the music. But with just a little explanation I can guide them on that listening journey.”

He says he wants to appeal to Shay’s longtime listeners, but he wants to introduce those listeners to more contemporary things. He likes doing this by featuring different versions of songs: Dylan’s “Fare The Well” followed by the Inside Llewyn Davis performance by Oscar Issac; Leadbelly’s “In The Pines” alongside Nirvana’s “Where Did You Sleep Last Night?” from Unplugged In New York.

“For the folk audience, hearing the name Nirvana might be a huge turnoff,” Zolitor says. “But in reality, Leadbelly was one of Kurt Cobain’s musical heroes, and the Unplugged album is absolutely beautiful. The song craft and acoustic arrangements is not far off from what they might see as ‘folk.'”

And the influence goes both ways as well. “A Nirvana fan might be flipping to the dial, hear the song and stick around and get to hear some folk artists they might never have heard otherwise.”

Beyond his DJ stint, Zolitor is a musician himself, a bassist and guitarist, and he estimates he’s played in 15 or 20 bands over the past decade. He hosts the open mic at Dawson Street Pub in Manayunk, and occasionally books shows in his living room. Keeping the live music element of The Folk Show around is key to him. “To me that’s so important to have,” he says. “That’s a huge part of the show, having guests drop by, play songs, chat for a minute. You feel like you’re stumbling into a hangout, and in the folk tradition, that’s how it should be.”

Shay says he likes seeing his successor involved so many things beyond radio. “He plays music, he books shows, he’s branching out into a lot of things that I did not,” Shay says. “He’s going to be somebody very special to the music scene.”