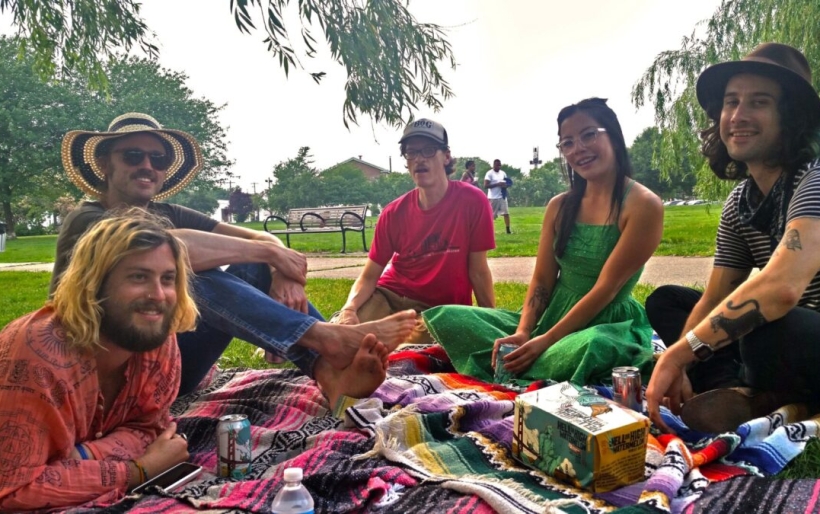 Summertime Sips and Summertime Sounds is our occasional, seasonal foray into summer vibes with our fave local “summertime” bands, in which we meet up, share a drink, and revel in the sunny weather (check out last year’s editions here). Today we catch up with psychedelic rockers Needle Points; read on to experience the adventure.

In the past, I always associated summer with hot city blocks and beach escapes, but this Memorial Day Weekend, for the first time in my adult life (I’m not counting Camp Beisler in 2nd grade), I went camping. Four friends and I drove up to Northern PA, pitched tents, looked at stars, and drank tons of home-brew Gatorade … and somewhere around my 3rd Gatorade I realized summer jams are not just The Beach Boys and ‘90s rap and chillwave. Summer jams are also music to listen to while hiking through a forest, or sitting around a campfire, or making out under a waterfall, high on Gatorade and summer love.

Needle Points are a local six-piece who write exuberant, psychedelic grooves appropriate for waterfall makeouts. In fact, when I meet with the band, they’re gearing up to play Barbary Breakout—a music fest at a campsite run by the Barbary. It’s sorta the perfect gig for them: the band itself is basically an amalgam of ‘60s festival rock and sweet, sweaty, beats. Bass lines undulate like the flow of a river; guitar lines alternately sear and ooze. It’s fun, and a little dirty, and probably a little drunk (ok, maybe a lot). It’s also perfect for dancing barefoot in a meadow to, closing your eyes and totally vibing out man. Needle Points are the band I most want to drink with because they’re the band I most want to drink to.

And that’s sorta the point. Hanging with the band, it’s clear Needle Points are more than bandmates. They’re a family, linked through a long history growing up together, and a shared belief in spiritual health (drummer Judy Kaplan claims to be their “mental health adviser”) and massively jamming out. The Key: It’s finally summer! And I’m so glad I’m an adult and don’t need to get an awful summer job. What were some of your worst summer jobs?

Colin Holloway: When I was in high school, I went to summer school. And one year as punishment, after school, my parents made me work. My dad worked in construction and I would have to go with him, but I hated it. I would run away and nap in the middle of the day. I’d find cardboard boxes or empty barrels and I’d hide in them. It was depressing.

Danielle Kinoshita: I did delivery for Qdoba, and California Pizza Kitchen, and one summer, I worked as a waitress for a Korean-owned sushi shop, in Koreatown. And since I was the smallest of the servers, I got the job where whenever someone ordered a sake bomb, I had to put a cup of beer on the table, and then two chopsicks, and a shot of sake…and I had to get up on the table and yell “Sake bomb!” and jump on the table. And when I jumped the sake would fall into the beer. So it was very messy—and of course one table would see it and then they would want it too, so it was an endless cycle.

Judy Kaplan: I was a bagel boy. That’s actually how I met Dave… we were living in the same town, but hadn’t met yet.

Dave Ulrich: He grew up in the town. It was a small town, and there was like, one gas station. I remember I was having a party at my house, and my friends and I cruised into the station the afternoon of the party and saw these two freaks in the parking lot holding signs—it was Judy and this other guy. And Judy had bleached orange hair—you know, when you try to beach it but it doesn’t work—and they had these hugs signs, but they had really tiny writing. So we stopped over to read the signs and invited them to the party…but you know, it was an awkward exchange. So nothing came of it. Then 6 months later he started working at the same coffee shop—he had that same orange hair so I knew it was him.

CH: What did the signs say?

Brian Langan: I had a horrible job where I worked at a Country Club. And I would be stuck in the pool area with all the wives with the kids, working at the snack bar. It was so hot in there—there was a heat lamp, an oven, a stove, one of those hot-dog things… But I quit. (helaughs) Let’s just say I burnt some bridges at Glen Oaks Country Club.

DU: I worked at a country club too. It was awful. I was a caddy, but no one would ever choose me. It was so sad. Then one time I finally was chosen—I was so psyched because I was like, finally, I’m going to make some money. But they ended up getting me totally wasted—there were like beer taps around the course. I was probably 14 or 15. On Coors Light.

DU: (laughs) Exactly. Then partway through I realized they were trying to hit me with the golf balls. Like that was their game—they got kids drunk then tried to hit them. It was the first time I got drunk.

The Key:That sounds awful!  So this super hot weather makes me so want access to a pool. Do you guys have any leads?

CH: There’s this pool near my house I used to go to. It’s a neighborhood pool — a bunch of people in the neighborhood had keys and we would hang out there. Unfortunately I now live right across the street, but I can’t go anymore because I no longer know anyone with a key.

BL: I don’t have a pool now, but I had a house with an awesome pool growing up in Scranton.  I remember one time we were all swimming around—Colin was over—and all of a sudden someone was like “Damn, what’s that?” And it turned out there was a sideview mirror from a car in there. Weird. Then 20 minutes later, “Aghhh!” Another sideview mirror. There were five of them in there. It was an above ground pool near the road.

DK: An above ground pool near the road! (She laughs). Someone probably tossed them in there.

DU: You can do a whirlpool in an above ground pool… (Discussion breaks out about how to achieve this).

BL: Mike went in with a cardboard box as a bathing suit once. It disintegrated quickly (he laughs). The Key: So we’re gearing up for festival season. What are some of the most fun big shows you’ve played?

DK: Firefly was definitely my favorite. We played at 11:30 in the morning. We stayed up all night before. Soundcheck was at like, 9 a.m.

JK: We thought there was going to be a lot of traffic, so we left really early. Then there was like, no traffic, so got there around midnight.

CH: …So we drank all night in a casino parking lot and took like, 30-minute naps.

JK: The morning of the show we were getting ready and we noticed a huge crowd of people. So we were getting really psyched. But then we eventually realized they weren’t there for our show at all—there was a food truck nearby and they were all in line for breakfast burritos. So we played to a brunch truck crowd. People were probably like “Oh, there’s some band playing…”

JK: But the only people that actually came to hear us were our friends in Cruisr. (Read Summertime Sips with Cruisr here).

DU: We also loved playing the Barbary Breakout—that was out best show. Last year a lot of other cool bands came, like Bonzai, and Far Out Fangtooth, Fantasy Panther. And we got to play last, at like midnight or 1 a.m. And people had been drinking since like noon. So people were off-the-chain crazy; it was a lot of fun.

The Key: Speaking of drinking, what are Needle Points’ favorite summer drinks?

The Key:  What’s in the Needle Point?

DK: It’s tequila and pineapple with a lime garnish, served on the rocks.  If you order it, most places won’t know what you’re talking about. But if you explain it, they’ll do it. (laughs)

DU: The pineapple is hydrating. The alcohol is dehydrating. (laughs)

DK: One time we played at the Khyber, and we all ordered the Needle Point. And after about an hour, they ran out of pineapple juice. Then we played a second show there about 6 months later and they were fully stocked. They remembered us!

CH: I also like this drink called the Jasmine Giant from Win Win at 10th and Spring Garden. It’s basically gin, campari, and a little aniseed flavor. And it’s delicious.

JK: A few of us work at Nomad Pizza—and I wanted to make a drink to serve there that’s like the Needle Point, but sassier. So I came up with a drink called “The Nomatador”—it’s a pun on a drink called the Matador which is tequila, pineapple juice, and lime juice. So I took that and I added a little bit of Serrano pepper, and a little bit of Combier, which is an orange liqueur. Served it up, with a salt rim.

The Key: So let’s talk summer soundtracks. What does Needle Points listen to in the summer?

DU: I like that song “Dancing in the Moonlight.” That’s a really summery song for me—it’s so easy-listening. Also this guy S.E. Rogie—he’s an African guitarist and singer, and he has just a couple of old albums, but they’re summery as hell. They are sweaty.

JK: “Beast of Burden” comes to mind for me. That’s a good summer jam.

CH: I really like the soundtrack to this film Rockers—it’s like, supposed to be a documentary about these ’70s, Jamaican bands—but then it ended up a full movie. The music is really good.

Mike Quinn: For me it’s stuff like Canned Heat, and the soundtrack to The Sandlot. Also the Dazed & Confused soundtrack. Lots of soundtracks.

BL: “There Is a Mountain” by Donovan for sure. Also CSNY and Buffalo Springfield. My dad always said about CSNY: “Gotta be sitting on a rock somewhere.”

(Everyone looks towards Danielle)

DK: (laughs) I like Sublime, and Blink 182, and Gloria Estefan. Also Shania Twain, Come On Over. [Kate’s note: I totally had this cd]

The Key:So what’s coming up next for Needle Points?

CH: We’re playing the Night Market next Thursday [tonight!], and we’re playing a show at the Everybody Hits Batting Cages on July 24 with Lantern. We’re really psyched about the new record. It was produced by Scott McMicken of Dr. Dog.

DU: —It has a million vibes. It has more vibes than just the simple garage rock we did in the past.

The Key: We can’t wait to hear it!