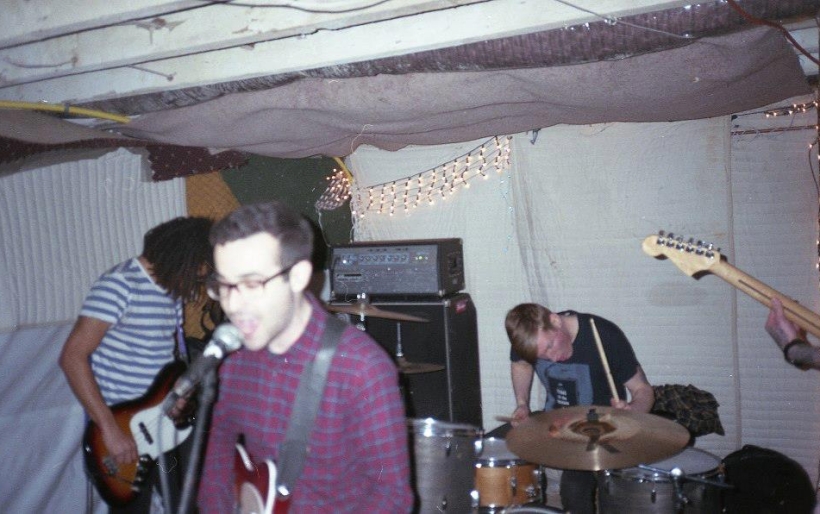 The greatest thing about the punk/emo scene is its ability to blindside you with great music. Especially in Philadelphia, it seems like new bands are popping up every week. Being bombarded by all this new music can get pretty overwhelming. Who should you pick to listen to? Who stands head and shoulders above the rest?

Philly power trio Pocket attempts to answer that question confidently on their debut album Full Bloom, now out on the illustrious Connecticut-based label Broken World Media. They’re all English teachers, so naturally, it commands and holds your attention. It has everything you need. But how does it accomplish this?

Before we start, let’s get this out of the way: if you’re one of those self-proclaimed “90s kids”, and you have nostalgic longing for that particular decade, let Pocket welcome you back with open arms. Like so many other bands in this wave of emo (let’s steer clear of that “revival” label), it’s clear that they take influence from the classic turn-of-the century emo acts like The Get Up Kids, Saves the Day, Texas is the Reason, Knapsack, and Braid.

But these bands need to have something that separates them from their founding fathers. Now, most of those aforementioned bands were known for their angsty, emotionally splattered lyrical and vocal offerings, or as American Football put it, “teenage feelings”. It became pretty common to expect whiny vocals over all that beautiful instrumentation.

This is where Pocket saves you the trouble.

Yes, the band sounds relaxed. Sure, the emo is still there, but Pocket sounds like a live interpretation of laying in bed at night, carefully strumming your guitar. Their songs float along like a weathered piece of driftwood. At times, they can even seem a little blissful and content.

For example, consider the hilariously (and sort of true, until now) titled “They’ll Never Finish 202”, which is a waterfall of an instrumental track. Upon listening, you can almost feel yourself being transported to their tiny, tight-as-a-box practice space, watching the wallpaper peel and hearing them try to keep it down while their neighbors are sleeping. That’s what these musicians dream of: simply spending time with your friends, making music.

The vocals aren’t squeezed out until they crack with that familiar anxiety – they ease out with a tail-between-the-legs attitude, quite shy. But it’s a relief to hear, especially since the carefully placed harmonies compliment the gleaming guitar work.

This can be heard right off the bat on the opener “Return to Sender”, with a rolling wave of Drop D and carefully tapped ride cymbals. It moves like pedaling a bike through hills and valleys – and Pocket definitely knows the hills they need to cross in order to stand out.

Like the opening seconds of “Return to Sender”, Full Bloom is full of hills that move past like scenery on the highway – so seamlessly, it’s more about the moments.

For example, the bittersweet chords of “I’ll See You When I See You” break down into a widescreen-worthy arpeggiated riff, complete with screeching feedback. Later, the Turnover-esque lushness on “Trigger Warning” makes way for the chugging bass to be the star. And on “Falter and Follow”, the self-aware line “We’re expected to avoid mistakes” is sung just before a superball-bouncing tom solo is triggered. Hidden among these tracks are the full-speed, pop anthems “Black Warmth” and “Gibson” that take a dip in Jimmy Eat World territory. If you feel like the album might be getting a bit too chill, these songs will bring your listening ear back to center. Save them for your upcoming summer road trips.

Pocket’s Full Bloom comes at a perfect time for emo music: it’s one of those albums that can easily accompany your greatest memories for the summer ahead. It’s an album for the content – the ones who glance at the people they love having the time of their life. The ones who smile and write about these moments later, keeping them forever.

Full Bloom is out  now on Broken World Media. You can pre-order a cassette here.