Go behind the scenes of David Byrne's Contemporary Color 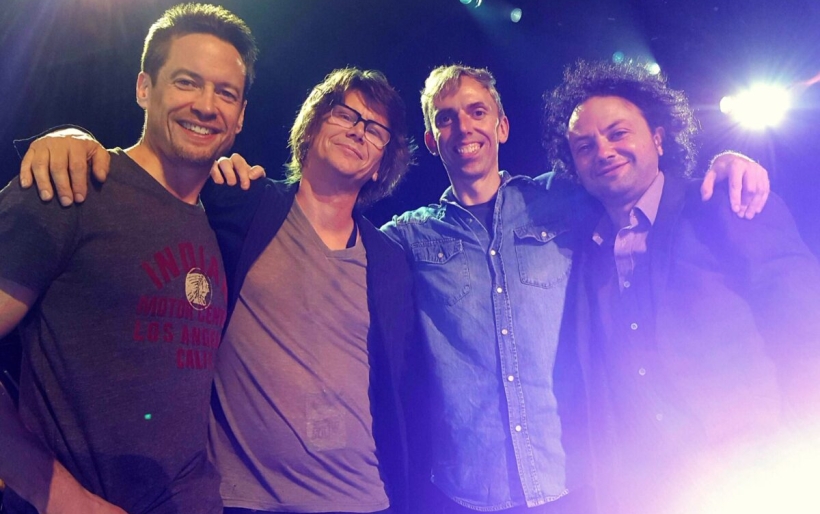 Contemporary Color is David Byrne’s recent musical project. It features “ten of the country’s elite color guard teams — the flag-flipping, sequin-studded crème de la crème of the “sport of the arts” — sync steps with musical luminaries for a bacchanalia of beats, sabre-spinning, and glitter cannons.” It features live performances by Byrne, Nelly Furtado, How to Dress Well, Devonté Hynes, Money Mark + Ad-Rock, Zola Jesus, Lucius, Nico Muhly + Ira Glass, St. Vincent, and tUnE-yArDs. And in the seat of the band is Philly’s Jim Boggia, and Philly born, #TempleMade jazz musicians. The show opens and plays in Toronto tonight and tomorrow at Air Canada Centre and on June 27 & 28th at the Barclays Center in Brooklyn as part of the BAM (Brooklyn Academy of Music Winter/Spring Season). Last week during rehearsals for the show, Boggia began posting photos of the rehearsals on his Instagram, and we reached out to him for to find out more.

The Key: Congrats on being involved with the show. So, we know some of the more well known names involved – who are some of the musicians?
Jim Boggia (JB): The core of the band is pulled from the musicians that played on the ‘Love This Giant’ project. Among the newly added folks there’s a small Philly-contingent, in addition to myself, Thad DeBrock is playing guitar and pedal steel and Conrad Korsch is on bass and additional keys and both are doing background vocals as well. They both live in NYC now, but are from Philly and they both went to Temple in the Jazz program.

The Key: What¹s your role in the show?
JB: I’m part of a 13-piece band that’s accompanying all of the artists and color guard troops, playing acoustic and electric guitar, keyboards, and singing background vocals.

The Key: Are you going to be playing in all the shows?
JB: Yes, though there’s only four of them. I’d love it if there were more but when we were working on David Byrne’s tune he told us he had just been interviewed about the show and was asked if there were any plans to take it on the road and he pointed out that with 300 high school students involved that was a bit impractical.

“Some years ago, a colorguard team wanted to use some music I’d written… for one of their routines. I said, ‘Fine, no charge… you are a high school team after all.’ But I asked that they send me documentation out of curiosity and for my archives,” Byrne writes. “I eventually got a DVD of the whole World Championship competition. I watched, and was amazed and delighted to find myself in a new world that I didn’t know existed.”

Byrne adds that he gravitated toward what’s referred to as “winterguard,” a more vibrant, freeform version of the artform that isn’t tied to rooting on high school football teams in the fall. After brainstorming the idea of Contemporary Color, the former Talking Heads frontman approached the Brooklyn Academy of Music and the Luminato Festival with his idea.

“Ten colorguard teams paired with 10 musical artists. Somewhat surprisingly, they said yes! This is sort of a crazy idea,” Byrne said. “We’re all slightly out of our comfort zone, but very excited — it’s an idea that seems natural and obvious too, so why not!?”

Boggia, told The Key that the being involved in Contemporary Color has “been a completely pleasurable experience. There’s been a tremendous amount of pretty challenging music to get together in a short time. The pieces were all written by the artists specifically for the show and are based on the routines each color guard troop had come up with, so there’s a lot of tempo and time signature changes that have to hit exactly in order to keep with the choreography (if that’s what it’s called – I’m new to the color guard world and terminology) and we only had about 2 hours with each artist to get it together. In the face of that though, all the artists and musicians worked great together and it was remarkably stress-free. I can’t wait to see the troops in person performing to the music.”

Getting ready at my station at the Air Canada Centre to start soundcheck for @contemporarycolor – Shows tomorrow and Tuesday, next weekend at the Barclay Center in Brooklyn.