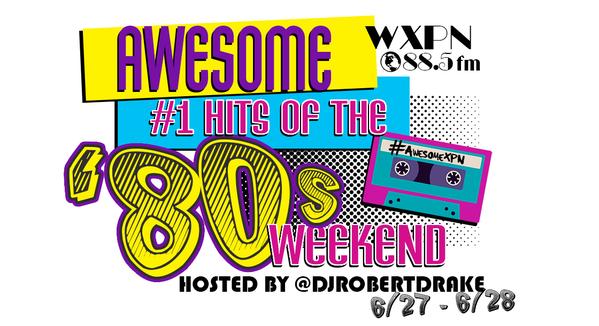 Well, day one of DJ Robert Drake’s Awesome #1 Hits of the 80s Weekend was a total blast. The music was great (and horrendous), the #AwesomeXPN hashtag was poppin and people from around the region (and the country) were weighing in via social media on the best and worst of what we were collectively listening to. Here’s some of the best Twitter action we’ve seen so far.

A lot of listeners were legitimately excited about the countdown, and talked about the memories it sparked.

#AwesomeXPN is now playing on every radio in the house

I remember my dad taking me to the mall to buy “Songs From The Big Chair “. The record display was literally on a big chair. #AwesomeXPN — Heather Breyer (@beevintageredux) June 27, 2015

Seriously Billie Jean changed the world. Seeing MJ moonwalk on the Motown special was amazing. Me and my sisters rewatched that over & over. — Maureen Walsh (@trimmtrabb1977) June 27, 2015

I would say the first few notes of “Beat It” are as iconic as the opening shot of “Like A Rolling Stone.” so there. @awesomeXPN — Call Me The Breeze (@somevelvetblog) June 27, 2015

The only damper on this amazing music is knowing that Michael Damian and Mili Vanilli are waiting for us in 1989. @wxpnfm#AwesomeXPN

Other listeners were more, er, questioning of the music and its cultural relevance today (or ever).

Remember when Billy Joel was a tough guy? Now, he looks like your dad. #AwesomeXPN@wxpnfmpic.twitter.com/oCvFItxZfi

Bernie Taupin must have been on one of his coke binges when he wrote this. #AwesomeXPN

As the trip down memory lane ensued, many listeners began Tweeting images of their personal 80s memorabilia.

Just found the ticket stub from my first concert: 1987 The Hooters #AwesomeXPN@wxpnfmpic.twitter.com/rfVIlTN3au

@mareetea@wxpnfm#AwesomeXPN Looks like I went to a lot of concerts in the early 80’s 🙂 pic.twitter.com/8imilBXS0U

.@EmorysGirl: @wxpnfm I listened to radio-made mix tapes on this in the 80’s… I am not alone in this. #AwesomeXPNpic.twitter.com/zTLmaxeLaf

I should point out that I’m listening to #AwesomeXPN on the boom box I got for Christmas in 1986! Still works great! pic.twitter.com/CiVfOmt3eJ

Robert Drake actually dug up and posted a photograph of himself from the 80s.

Which prompted other listeners to follow suit with a parade of amazingly retro images.

Me circa 1987 can’t get enough of #AwesomeXPN. Looks like I certainly got enough Dippity Do back in the day. #musicpic.twitter.com/4zwJBtHazI

@wxpnfm#AwesomeXPN “Coolness factor” in the Big Hair 80s. Circa 85. Listen all weekend to #1 songs from 80s! pic.twitter.com/MbnC8Vm3ar

Engagement party 6/26/84. Wish I still had that blouse NOW!! A prediction for future 6/26? #LoveWins#AwesomeXPNpic.twitter.com/GoAtbkdDsX

The #AwesomeXPN 80s weekend continues this morning at 10 a.m. and runs until Robert has played every number one hit through December of 1989. Before its over, we will hear not one, not two but three Milli Vanilli songs. And on that note, here is a closing thought from Philebrity’s Joey Sweeney.