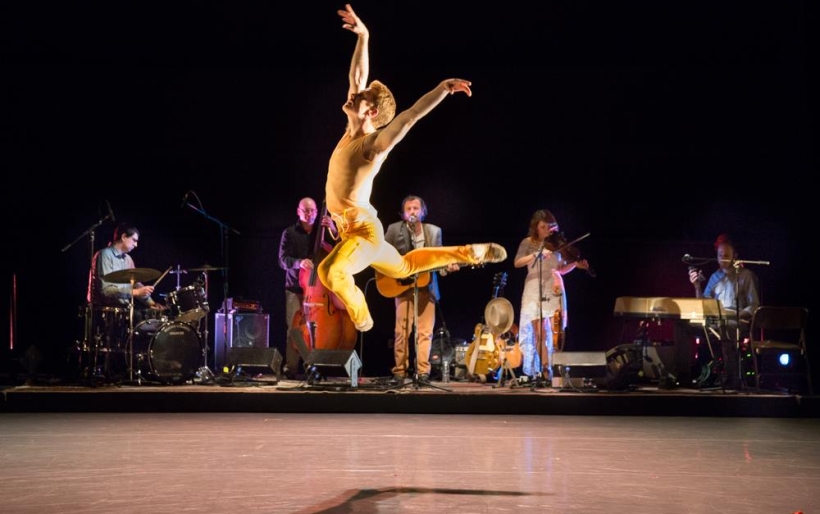 Chris Kasper’s Bagabones takes flight with the help of BalletX

By John Vettese
July 10, 2015
02:07 PM
Share
BalletX dancers with Chris Kasper and his band performing “When We Are All One” | Photo courtesy of BalletX

When we heard our Philly blogger friend Dan McGurk of Root Down in the Shadow was attending opening night of Chris Kasper’s collaboration with BalletX  at the Wilma Theater, we asked him to share his impression of of the performance. You can read his review below.

During a Q&A at the Wilma Theater Wednesday night, when Chris Kasper was asked what it was like to see his music performed with ballet dancers, he said “It’s fulfilling at a level that’s hard to describe.”

“A song-writer always hopes that the music continues to grow after it’s been put to pen,” Kasper told the opening night crowd at the Wilma Theater. Nearly two years after Bagabones evolved from muse to paper to songs to record, the album grows once again with the help of choreographer Adam Hougland and Philadelphia’s premier contemporary ballet company, BalletX.

Back in Philadelphia to do a new performance with the troupe, Houghland was looking for a local musician to work with, and was referred to Kasper by a friend of BalletX. Coincidentally, Kasper, inspired by a dream, had been looking for a dance troupe to work with.

“I had just finished Bagabones and I had a vivid dream about one of the songs with flamenco style dancers,” he said. “When I got back to Philadelphia, I started doing some research into the idea, but it quickly fizzled. Little did I know someone would be looking to collaborate to put dance to these songs.”

Dance performance is typically done to a soundtrack, but this would be live, would it work? Kasper admitted, “It was actually easier than anticipated. The first time we practiced together it was me on acoustic guitar, Kylie Ryan on fiddle and a snare. It went so easily.”

One informed (possibly skeptical) fan asked, ”How will the dancers react when they require the music to be accurate down to the split second?”

Kasper replied, ”On Bagabones there are more than five of us on the record, which is the beauty of a studio recording. With that in mind, we kept the five more complex and vital parts of the record. The focus was to keep rhythm as strong as possible, and keep the transitions as sharp and pointed.” This week at the Wilma theater, the project of fusing Bagabones with dance becomes reality. The BalletX Summer Series pairs two previous Adam Hougland pieces – Risk of Flight and Mashup – with a world premiere of When We Are Alone, the staging of Kasper’s Bagabones. With each piece, we see how Hougland is more than a choreographer, but also storyteller and director.

The first piece, Risk of Flight – which BalletX premiered in 2007 – combines the music of cellist and composer Zoë Keating with dance. To most casual fans, this piece evolves as one might expect from contemporary ballet, fusing modern and classical elements to yield a complex synthesis of sound and style. Each strum and pluck of the cello is as important as each movement of the dancer, making a dynamic, purposeful use of space and music.

Mashup was next for the event. Adam Hougland chose the musical pieces from the 1988 album What Really Happened To The Band of ‘59 by parody band Big Daddy. Their definition of “mashup,” explained the band, is taking contemporary songs and putting to them to the style of 50’s music.

Hougland said of Mashup, “When I discovered the music of Big Daddy, I instantly knew I had to choreograph to it. There is something so strange about hearing these ‘standard’ songs re-envisioned in such a witty and humorous way. I thought it would be a great opportunity to explore a different side to myself. Ultimately, it’s a dance about relationships and the dark hidden corners that we so often keep tucked away.”

The next time the curtains came up, Kasper and the band were on a platform on the back of the stage. Set to play a set songs from the album, the band looked sharp! Unlike Mashup, where the tracks were re-ordered to better tell a story, Kasper’s performance stayed true to the album’s sequencing. “I felt the order was important to Bagabones,” said Hougland.

The Bagabones story was no longer just the Kasper musical presentation. It moved from composer to choreographer, to dance, to audience, to memory. The album itself is a great one to drift away with; it has so much life, it beckons the imagination, and Adam Hougland and BalletX brings it to life on the stage.

Throughout the set, Kasper and Co. were spot on with the material. Every nuance was brought to reality, especially the lovely deconstruction at the end of “Time To Wonder,” which is captured wonderfully live, and accented so crisply by the performers. Without giving too much away, the performance is a must-see. Duets, soloists, full troupe…each bring powerful life and movement to the songs and the stage. The highlight of the night was “Blessed Little Secrets.” It was sublime. This tender love song already elicits such warmness, but with the BalletX presentation, it becomes love personified. With a worn out heirloom rug rolled out on stage, a couple acts out every element of the lyrics. All aspects of a couple cherishing the moments came across in dance. Whether a gentle snuggle or a loving smile, all are presented in contemporary ballet form, all while Chris Kasper, Kiley Ryan, Justin Leigh and David Streim play in-the-round center stage.

When We Are All Alone runs as part of BalletX’s summer series through Sunday, July 12th at the Wilma Theater; more information and tickets for upcoming performances can be found here.