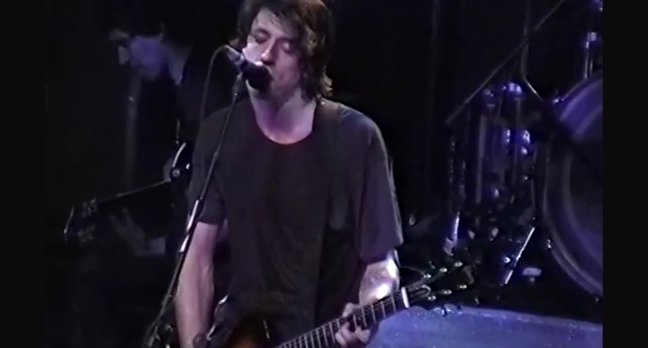 There was a time, many moons ago, when Dave Grohl wasn’t the in-yer-face rocker dude taking the stage at arenas around the globe with a guitar and a broken leg on a somewhat ridiculous throne. When his Sonic Highways HBO series didn’t have devotees trying to convince us that the was the lone savior of a vanishing generation of rock n’ roll (a point up for discussion among the music intelligentsia).

There was a time when Grohl was a goofy, humble former drummer of a colossally successful 90s rock band who was starting over in a solo project and hoping that some fans would be along for the ride. 18 years ago this weekend, Foo Fighters came through Philadelphia on tour in support of their sophomore album The Colour and the Shape. It was a hot July night; Supergrass opened the show. Some people came just for them, left early and are probably kicking themselves today.

Colour was a leap forward for Grohl the songwriter and frontman. Foo’s self-titled debut from 1995 was recorded before there was really a band in place; Grohl played most instruments, making for an eccentric and somewhat introverted set (though definitely loud – see “I’ll Stick Around” and “Wattershed”). By contrast, Colour was tight and focused, loud and anthemic, a definite band record filled with undeniable hooks (“Monkey Wrench,” “My Hero”), fist-pumping energy (“Enough Space,” “Hey, Johnny Park!”) and moving epics that are still radio staples today (“Everlong,” arguably the best song Grohl has ever written). The emotional punch of the album stems from Grohl’s 1996 divorce, and when he and the Foos took the Electric Factory stage on July 10th, 1997, there was an undeniable urgency to the proceedings.

Tomorrow, the Foo Fighters of the 21st century roll down 95 to play their second Philly-area show of the summer at the Susquehanna Bank Center. Even with most of the same members, they’re a different band – Grohl’s self-assurance and charisma has multiplied by like a bajillion times since those early days. Sure, he still tries to put across a down-to-earth, man-of-the-people persona and tongue-in-cheekily jabs at ridiculous rock star tropes – I’m thinking of Foo Fighters set at Firefly 2014, where the encore saw the band morphing into The Holy Shits!, their classic rock cover band alter ego that chugged solo cups of beer and covered Alice Cooper and Queen – but there’s no getting around the fact, seeing the crowd’s devotion and the way the Foos feed off of it, that they embody those tropes as well. And that’s okay: the world needs a rock star.

Still, sometimes (when a dude is screaming at you from atop a throne, perhaps, which Grohl may or may not have in action tomorrow) it’s nice to step back and revisit an artist’s simpler roots. We came across this vintage video of Foo Fighters at the Electric Factory in 1997 on YouTube over weekend, and thought we’d share. Watch it below, contrast it with footage from their July 6 show at SBC here, and get tickets and more information at the XPN Concert Calendar.