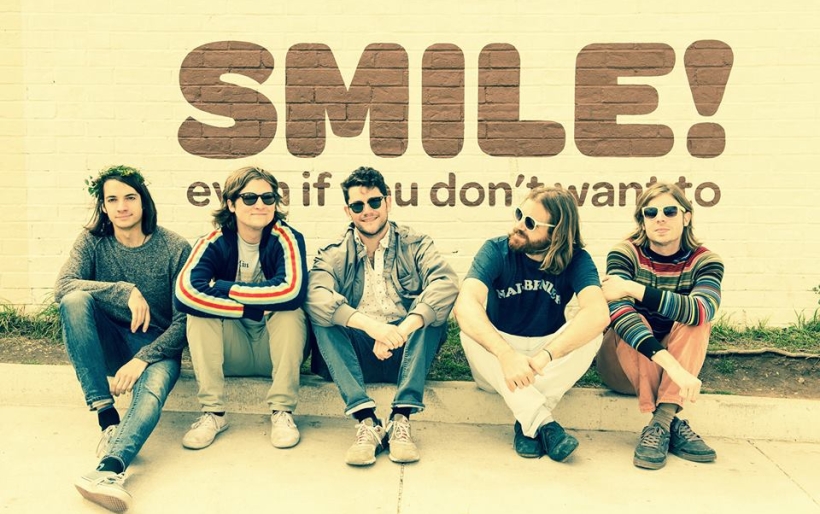 Summertime Sips and Summertime Sounds is our occasional, seasonal foray into summer vibes with our fave local “summertime” bands, in which we meet up, share a drink, and revel in the sunny weather (check out past editions here). Today we catch up with indie pop group Cheerleader; read on for our adventure.

I have very fond memories of summers circa 5th or 6th grade, hanging with my best friend Katie N., pouring over the class yearbook and selecting summer crushes, then planning to casually bump into them at the pool—and taking quizzes in Seventeen magazine with titles like “What kind of a flirt are you?” (not an answer: an awkward one).

Our favorite music back then was Madonna, Celine Dion, and The Crystals, and the soundtrack to Grease—songs about romance and young love, which seemed like the Most Important Thing Ever at the time. Cheerleader weren’t a band yet back then—but if they were, I imagine we would have adored them, their airy melodies and yearning choruses an elegant reinterpretation of our own tween angst. (Also we would have thought they were dreamy).

Cheerleader first caught our attention a little over a year back with carefree single “Perfect Vision” (read our 2014 interview with them here), then proceeded to hold us captive with a burgeoning collection of perfect pop gems. Their new record The Sunshine of Your Youth is a breezy collection of tunes inspired by “the nostalgic gloss you put on the past”; it’s also essential listening for Sunday drives and sunny mornings and anytime you need a pick-me-up.

I meet up with 3/5 of the band at Ortlieb’s in NoLibs; it’s the eve of the 4th of July holiday, and while the bar is mostly empty (we’re here early), there’s a palpable energy—we’re excited for the long weekend, and bbq, and spending time outside—and this energy drives our conversation.  Kyle, Ortlieb’s manager and bartender/bar DJ, mixes up some of the best margaritas I’ve had all summer; later, as we wind up, he makes us festive red, white, and blue shots. And the stereo of course plays the most perfect blend of Beach Boys and Bruce; after two rounds of margs and the shots we may or may not begin singing along. the author, with Josh, Joe, and Paul of Cheerleader (via Kate’s Instagram — @BookishKate)

In between the band graciously answers some questions—read on to hear about their favorite drinks to drink in the summertime, plus stories about summer camp, summer crushes, and what their parents played in the car during summer vacations past.

The Key: So your record is called The Sunshine of Your Youth which to me conjures up memories of summer road trips and family vacations. What songs soundtracked the sunshine of your youth, and also your present?

Josh Pannepacker: I like to listen to girls singing in the summer—like The Cranberries or The Sundays.

Paul Impellizeri: I recently bought a Beach Boys CD and a Tom Petty CD—they were $2 each. My car adapter for my iPod broke, so I’ve just been listening to them on repeat, and it feels pretty great.

Joe Haller: I feel like the summer always makes me wanna listen to The Beatles for some reason. Hip-hop is great in the summer too—just roll down the windows and play it really loud. Albums like Midnight Marauders by A Tribe Called Quest; De La Soul; Biggie.I also like listening to psychedelic and tropicalia stuff, like Os Mutantes. Also the Modern Lovers, and surf rock stuff like Dick Dale and The Ventures, The Velvet Underground…

JP: You know what would be cool to listen to in the summer? Alvvays… [Discussion breaks out on how to pronounce their name; Josh jokes “I alvvays listen to Alvvays.”] Also Best Coast…

JI: For me, it’s reggae. And doo-wop. My dad had cassette tapes he would play when I was a kid—I remember he had Ziggy Marley—I didn’t even know Bob, but I knew Ziggy. [He laughs]. Also he had one tape by The Police—but it wasn’t like, one of the famous ones—I can’t remember which one it was. Listening to that music always reminds me of summers in New Jersey, going on the boat…

JP: I recently borrowed my stepmom’s car, and she had this CD in there, “Class of ’63.” And of course it had all doo-wop hits, like The Chordettes and The Del-Vikings and stuff. Old jams are great for summer. TK: Some of my best and weirdest memories from childhood are from summer camp. What are some of your best or worst childhood camp stories?

PI: When I was a kid, I went to junior lifeguard camp in Sea Girt, NJ. I would wake up at 7:30 in the morning, head down to the beach, and they’d make you do these “jetty runs” where you had to run from one jetty to the other, then run back. That was rough. But the best story I have—I was in orientation for lifeguard school and one of the things you had to do was swim around the jetties. So we started swimming—and this kid felt something on his foot. And he freaked out—he thought it was a shark or something. It turned out to be a bunch of dolphins that were swimming with us. It was awesome.

JH: I was a boy scout. I went to boy scout camp, and I was so homesick. I was like 9 years old the first time I went. And we had to sleep in these terrible canvas tents and there were bugs everywhere. I cried every night. It wasn’t very manly. I remember one of the counselors gave me a pill that they said would make me feel better, but it was just a Tic Tac. I could tell, and I called their bluff.

JP: My sister and I went to Presbyterian camp. One year I remember I got sick on the first day, and my parents had to come and pick me up and bring me back home. I felt so bad for them—they finally got us all out of the house, then I came home sick. It was a really fun camp—I thought it was great. We did arts and crafts and water activities, and hikes. There was a dog named Barney.

TK: So you guys are heartbreakers—did you ever have a summer crush or a summer relationship? How did it end?

PI: I had a big crush once. It was in the seventh grade. My buddy was good friends with this girl, and he was like, “Ok, I’ll get you two together on the lifeguard stand.” And the plan was that he would be my guard, and if anyone else came, he would text me. [Discussion breaks out on whether or not texting existed in the seventh grade]. So—anyway—we never made it to the lifeguard stand—instead we were in the gazebo near my house, and I was making out with her. Then sure enough someone standing behind me calls her name… and I turn around and it’s her dad. We were mid-making out. And then one second later I get a phone call and my friend is like, “Dude, her dad’s rightthere!” And I’m like, “Yeah, I know.”  So I had to meet her dad. He shook my hand and said “Nice to meet you.” Then he made her go home.

JP: I have a summer crush right now…

JP: Mine is a girl on the West Coast. We met her on our last tour. She lives in California and she offered us a place to stay. She has dreamy eyes. When I think about her, my heart pounds… [He grins].

TK: So Cheerleader has been on tour a lot this past year. What were some of your most memorable experiences?

JP: We spent a night in Daly City, which is south of San Francisco. My friend lives there and we crashed one night after a show there. It was super dark when we arrived at night, so we couldn’t see a thing—but then when we woke up the next morning we were in this room with these giant glass doors overlooking the ocean. And it was a breathtaking view; there were people hang-gliding and stuff—and we were like, “What? Can we stay here?” Our host had a very relaxed, kind of hippie vibe—she made us all rose tea and read our goddess cards, which were supposed to predict our future.

TK: So was this lady your summer crush?

PI: He has many ladies. [They laugh. Chris Isaak’s “Wicked Game” comes on and everybody sings along].

PI: We also played an epic show in Santa Ana. It was totally packed…

JH: It was packed, but it was awesome.

PI: We were in this spot where it was like, a venue within a venue. So there were two shows going on, and the other one was a hardcore metal festival. And within this hardcore metal fest… was Cheerleader. And the promoters definitely oversold it—it was insane. So hot and so cramped, you couldn’t even walk around.  People were going crazy. [The band we were touring with], The Wombats actually played a metal song…

JH: It was a great show because the crowd was just so responsive. And any time we did anything remotely rock’n roll’ish they would be like, “Oh my f-ing god!!” They kept shouting “Take off your shirt!”

TK: Did you oblige?

PI: I really wanted to crowd-surf that night…

PI: Oh, absolutely not. But you know, this was my one chance. I was seriously contemplating it. [He pauses]. I remember crowd-surfing in a basement at a West Philly house show once…it was cool. I climbed up on the chimney and jumped off. A lot of people did it after me, so you know… [He grins]. Then I went to do it again and I fell on my face. I cut my chin open.

JP: I crowd-surfed at a Foo Fighters concert once in 1997. I remember that…

Also there used to be some venues out in West Philly like the 4040 where in high school you’d go to see ska and punk shows. People always did stupid stuff there. I didn’t really like ska that much, but I liked kicking my feet! 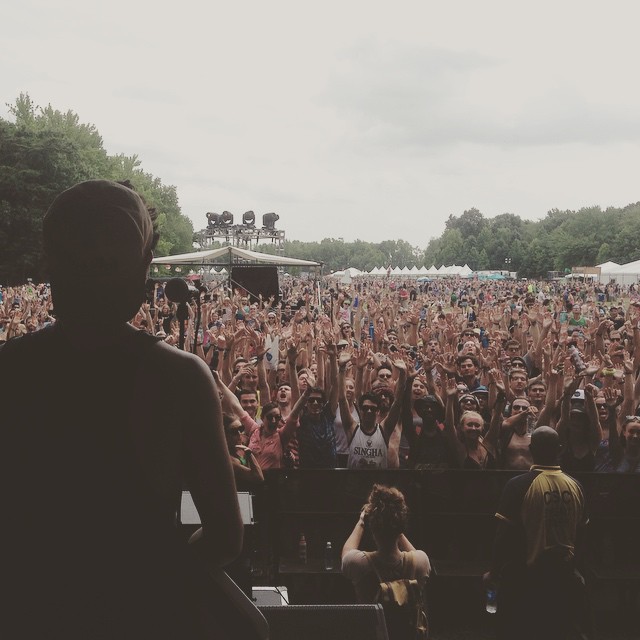 Cheerleader at Firefly Music Festival (via the band’s Instagram — @Chrleader)

TK: What are some of your favorite summer drinks?

JH: Definitely margaritas. And Kombucha—I probably drink one of those a day.

TK: Where’s your favorite place to get a margarita?

JH: At my house [laughs]. I make them strong, with no sugar, no salt. [Jokingly] I’m a purist. I’ve also been making these drinks called the Suffering Bastard, which is really good—it’s one part gin, one part bourbon, lime juice, bitters, and ginger beer. It gets you f-ed up.

PI: I’gotta say Corona—it makes me think of my mom, who is an ESL teacher. And in the summers when I wasn’t in school she would have Spanish-speaking families over and they would bring their students. And the adults would drink Corona.

PI: Lobsters, clams, corn-on-the-cob—I know those are foods, but they feel so summery to me. Also Kool-Aid.

TK: Kool-Aid is 100% summer. So what’s coming up next for Cheerleader?

PI: Then we’re going on tour with Civil Twilight. We’re also playing a show in Belmar Beach July 16 [tomorrow!] right on the beach. It’s right near the house where I grew up—it will a good one. And of course XPoNential Fest.

JP: I want to go to the casinos!

PI:And I want to go surfing. I surf a lot. [Discussion breaks out about Paul’s rock-hard surfer abs]. I surfed when I was out in California and I miss it.

[As we wrap up the interview, “Born in the USA” blares from the speakers].

JP: Other than that, we’ll just hanging around Philly. 4/5ths of us live in Fishtown, so we’ll be around.