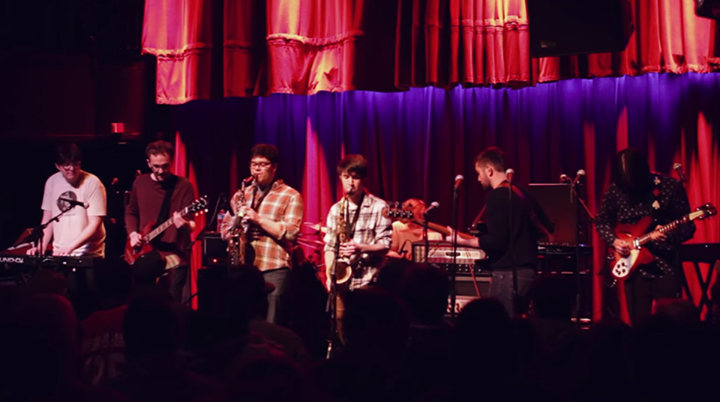 PREMIERE: Darla tighten up on Let Darla Be Darla!

It’s been about a year since Darla made their debut, a multi-faceted foray into funky jazz-rock called Movies! Movies! Movies!. Then there was Darla Forever!, an EP that focused on the big-band potential of the seven piece while maintaining an exploratory, slightly off-kilter approach to their sound. And now we have the premiere of Let Darla Be Darla!, the local outfit’s strongest effort yet.

On this third EP Darla have tightened up their mission. You’ll pick up something undeniably 70s about the record, a Steely Dan meets Chicago confluence of jazz arrangements and pop hooks that gets more and more detailed with each listen. A psych / experimental tone is still there, but this time it’s in the form of effects rather than genre.

[This record] is our most cohesive effort to date. Everyone was much more involved in the song writing. This was also the first EP that we were able to develop through playing live shows rather than just writing and tracking immediately. It was really a pleasure to jam on these songs and see where things went. We started using effect pedals on the saxophones at the beginning of the writing process and it has really brought our sound to a whole new level. This EP is definitely a milestone in our growth as a band and we can’t wait to see what the next record will bring.

Listen to Let Darla Be Darla! below. You can catch the band live at The Fire on Sunday, July 26th or at the Blue Cross RiverRink Summerfest sessions on September 24th. More information for both shows available here.