XPN Fest Recap: The Word light up the River Stage 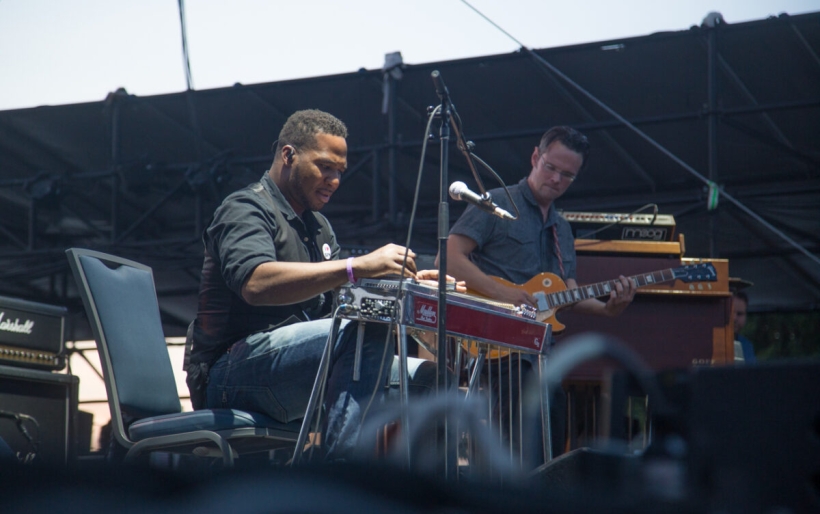 XPNFest Recap: The Word light up the River Stage

It’s not about individual songs with The Word. It’s about creating a one-time-only musical experience where there are twists and turns, fueled by their latest release Soul Food.

The Word are a blues rock super group, comprised of Robert Randolph on pedal steel guitar, John Medeski on keys and the North Mississippi All Stars on drums, guitar and bass.

Randolph dropped right into the groove of “Early In the Moanin Time,” building up the theme before handing the reins over to Medeski. And if Medeski wants to jam on a melody to see where it goes (as he often does), his bandmates know how to work with him.

This kind of teamwork was prevalent throughout the set. It’s a style of improvisation that is difficult to pull off but when it works, like it does with The Word, it’s the most impressive, cathartic and exciting kind of playing.

At one point drummer Cody Dickinson came out from behind the kit and picked up his washboard, taking things in a weird, spacey direction as Randolph picked up the drumsticks and Duane Betts, son of Allman Brothers guitarist Dickey Betts and new touring member of Dawes, joined on guitar.

Returning to their rightful places, they let the music billow out for a few measures before getting into some honky-tonk vibes. The set ended with a slow, gelatinous kind of blues song that grew into a lights-flashing, feet-moving party jam.

Check out photos and setlist, and listen to an audio archive of the performance below.