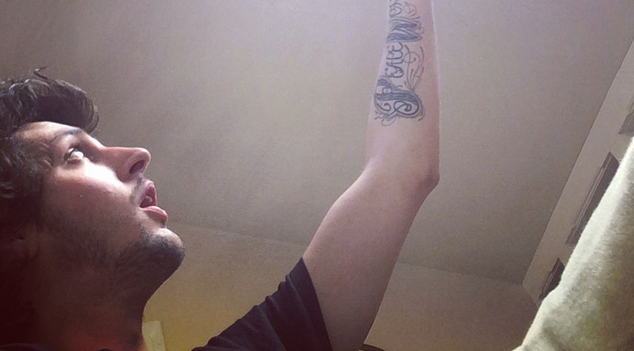 Higher Purpose: Mic Stewart talks about his new EP and sabbatical in Dallas

On the cusp of releasing his Higher PurposeEP and relocating to Dallas for six months starting in September,Mic Stewart is filled with nothing but good vibes and positive energy.  Always a favorite of mine for talking all things hip-hop, I got another chance to sit down with the Philly emcee and preview his six track EP last week.  The interview wasn’t too different from our first conversation back in February in that I found myself steering clear of written questions and more having a conversation with a guy whose plan and motivation is all-consuming. Something I’ve joked about with Stew in the past is remembering to send me songs; he’d frequently forget, despite sharing the fact that he had a lot of them – which he and I called “ammo” – that were in the vault and ready for anyone to hear at a moments notice. Before this interview, our last phone call ended in a “Yea brotha, I’ll definitely be sending you those files,” and me being skeptical that they’d actually show up. It’s pretty great to think that this time, I did get them. A bunch of them, some of which will be seeing the light of day on Higher Purpose, others I’m still not sure what Stew’s plans are for them yet.

I share this little anecdote because I realized the character and artist that is Mic Stewart has a way of “disappearing off the planet” as he puts it. Becoming lost in the music and obsessed with the thought of perfecting his craft is something that’s paid dividends and elevated his latest EP to new heights. Higher Purpose is a more personal piece that touches on a plethora of subjects in his life, demonstrating an expansion to the hard-spitting Mic Stew of old.

Peaceworld, Stew’s 2013 album, was one of Philly’s unsung bright spots of that year, piecing together different narratives and really introducing the people to what his creative mind can do.  A very complete project with respect to its lyricism and production, this year’s Higher Purpose could possibly trump its predecessor in certain aspects – despite being half the length. Check out our conversation about it – and a variety of other topics – below.

The Key: So what’s up with this Dallas move, my dude? Why Dallas specifically, do you think?

Mic Stew: Honestly, it’s just easier to travel.  I figure I’ll work in that city for a couple months and figure out what’s going on and get a base down there. I have a friend down there and [I hear] it’s a real young and vibrant community.  It’s a melting pot of people and there are some opportunities there and it would be an easier way for me to get to Philly and L.A, it’s right in the middle.

TK: I listened to the EP, I got the 60 other tracks too. Were the songs chosen for the Higher Purpose EP part of that original batch of 60 songs or were they separate?  How would you describe the creative process behind this piece?

MS: They were actually separate.  What happened was after my first album came out, this producer Luv Jones tweeted a blog post that he wrote about my song “I’m Not From Brooklyn.” This guy happened to make that style of music, like Brooklyn sample-based boom-bap stuff. He tweeted the video and DM’d me then just started sending me beats.  So all the while I’m sitting here writing an album that I think is like a masterpiece and writing these 90’s inspired raps, this dude is sending me tracks that I feel is like so easy for me to write to.  I wasn’t thinking much of it but it turned out to be all part of the process. He hit me up at the top of the year asking what the status of our music was and I went back to look at what I did with them and they were like four really strong records.  I went back and did the last two – “Somewhere in Philadelphia” and “Rooftops,” I wrote then in like February or March – and the rest have been in the stash for a while. I really had no plans to use them originally, I just always keep creating.

TK: I felt like this project was really concise and told more of your story and who you are. What do you feel this project says?

MS: I feel like this project is a big personal statement but it deals with exterior things.  It deals with politics, it deals with religion.  It touches on my personal experience with the Catholic church.  Also with alcoholism and alcohol abuse, it’s common not only in our culture but also my family.  I grew up with the Catholic Church as my moral fabric and having to be a man and look at that and seeing so much wrong with that.  It’s me shedding those layers and reaching outside of myself.  I think if there’s a thesis here, it’s that no matter how I am as a person, this subject matter won’t change, I’ll continue to try and be the baddest rapper, [singing] “It’s 2015 nobody cares about your raps b****!” [laughing] But it’s like I’ll always care about my lyrics, that’s my life.

TK: Since you plan on making this relocation in September. Do you have any plans to do a show for the Higher Purpose EP before you go as a sort of “farewell” performance?

MS: I don’t think so. I might book a party for this record.  I decided not to give Philadelphia a big goodbye as an artist because I don’t think I want to reorient myself geographically like that. It only costs 200 dollars to get here and back from Dallas, I’m going to continue to play and work in Philly, I’ll always be a Philly artist. I don’t want to send like a ‘goodbye’ message cause I’m going there to finish a lot of the work that I started here.  I was thinking about it earlier, I’m a Philly artist but it’s hard to know what that means in the context you’ve always known it. When you hit the road you learn that everyone isn’t like the people in Philly and what you’re used to.

TK: I know you’re moving for the music, but is there another goal you have set once you get there, or even plans to work with specific artists?

MS: I have a couple producers out of Dallas that I’m working with now.  I really don’t want to speak too much on it though for the sake of it not coming to fruition.  But there are some friends and family that I will be connecting with down there.

TK: Getting back to the EP, what would you say your favorite track was? I know it’s hard asking musicians what song is there favorite off a record they made, but if you had to pick, which one jumps out at you?

MS: I think…I like different ones for different reasons.  For some reason “Somewhere In Philadelphia” is the one I run back the most.  I feel like I actualized some of the MC I always wanted to be.  Its dense, playful, and has that soulful feeling.  The best record I think in terms of viewing it as which song would perform the best and which people would gravitate to would probably be “Don’t Look Down,” people are loving that one.  “Speak Easy” is also one that’s pretty personal and close to the heart.  As far as “Rooftops” goes I think it’s like a teaser to a style I want to develop too, that sound is pretty fun.  All the tracks definitely embody dope s*** for me though.

TK: You actually put out some unreleased freestyles over Kendrick Lamar’s “Alright” and Drake’s “0 to 100.” What made you choose those tracks? Especially the Kendrick one, I know a lot of people are kind of cautious about approaching a Kendrick beat and tackling his flow but you seemed to not really have a problem emulating that.

MS: Well I loved To Pimp A Butterfly, I had it on a loop for like a month.  But just as an MC and out of the pure sport of it I just wanted to tackle that song and that flow.  I believe I’m a Kendrick Lamar caliber rhymer and I don’t think that every MC can do that. [Laughing] I just wanted to have fun with it. As far as the Drake one, I just loved the beat and thought I’d try my hand at it.

TK:  Speaking of Drake,  I saw you tweeting the other day talking about the beef between him and Meek.  Since you are from Philly and I know artists like to rep for their city, how do you feel that whole situation is going? Did you feel Meek’s response to Drake was good enough?

MS: I definitely feel like it was a missed opportunity.  I was looking for a Lil Snupe like response, like an epic banger.  The fact he didn’t do that when he had all of Drakes fifty something million followers watching, complete missed opportunity.  He could of made the biggest come up in rap history and fell flat.  If he could of done it right he could of possibly crossed over, Meek already has massive hits.  The Nicki record is always playing on the radio, so if he would have came harder on it and grabbed some of Drake’s fans on the way he would of had it made.  It felt kind of bad though [laughing], It was like watching your boy get clowned on by the popular kid in high school.

Our talk went on for a good hour and a half with the majority of it being hip hop nerd conversations between the two of us, what albums he’s listening to now and what musicians inspire him. No matter who Mic Stew has on repeat, one thing’s for sure: he’s an artist that takes pride in what he does and will continue to grow. That’s the plan, anyway. This move to Dallas he kept mentioning isn’t a goodbye to Philly, just a way for him to grow as a musician, a way to experience things outside of the city he’s known for so long. The growth’s there, I’ve heard it. The lyrical prowess and scathing delivery that his first album gave us is only getting better due; his rhymes are handcrafted personal letters he writes eloquently. It’s as if you’ve experienced them yourself. A great listen for any hip hop head, the Higher Purpose EP drops tomorrow and not a moment too soon.

You can order the EP on iTunes here, while you can check out his released single “Somewhere in Philadelphia” below.