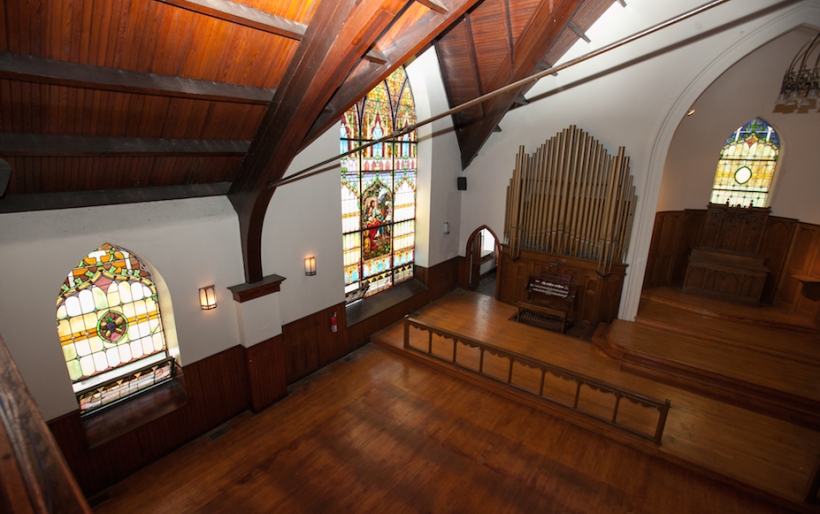 Just like this year’s Folk Fest headliner Arlo Guthrie sings about a woman named Alice who lives in a church, the Philadelphia Folksong Society is about to make a local church its home.

During last night’s opening night concert at Old Pool Farm in Schwenksville, executive director Justin Nordell made an enthused announcement to the festival crowd that PFS is planning to move its base of operations to a decommissioned Lutheran Church at the corner of Roxborough and Ridge Avenues. Between a performance space and classroom / office space, it will become a multipurpose facility for all of the Society’s year-round programming.

“It will be a place for people to take [music] classes,” Nordell told the crowd, his voice booming through a huge smile. “It will be a venue. It’ll be amazing.” PFS president Lisa Schwartz explained that church’s original sanctuary is intact, with stained glass windows and a working pipe organ. The sanctuary sits at about 100 capacity; if they are able to remove a non-load-bearing wall, that will up the room to about 200-cap. In addition to concert programming, the PFS would use it for workshops, as a coffeehouse and as a general space for community outreach.

“It’s a spectacular building,” Schwartz said. “It was a real fell-from-the-sky moment.”

The PFS recently signed a letter of intent to purchase the property and the festival this year launches their 5-year capital campaign where they hope to raise $1.75 million to cover the acquisition as well as rehab of the building.

Attendees at the this year’s Folk Festival can contribute $10 for a symbolic key to the building – “folk keys” Schwartz is calling them, “like ‘folkies'” – at the society outreach booth. When the space opens, PFS would move out of its longtime headquarters on Emlen Street in Mt. Airy to make the church its new home.

“The goal is to have it be our Swallow Hill,” said Schwartz, referencing a venue and music school in Denver with a similar programming vision as PFS. “We’re very excited.”