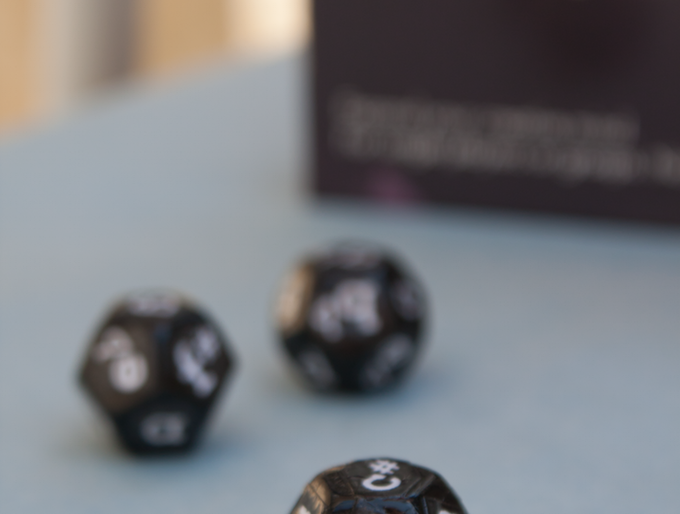 Tonic Game | courtesy of the artist

Where improvised music is concerned, every moment on stage is a roll of the dice. Scott Hughes wants to help beginning or struggling musicians by taking that idea literally.

The former UArts piano major successfully raised nearly $10,000 in a Kickstarter campaign earlier this summer to create Tonic: The Card & Dice Game for Musicians, which prompts players to create sounds prompted by techniques more reminiscent of a round of Monopoly than a late night jam session.

“It’s a practice tool disguised as a game,” says Hughes, who eventually shifted his academic focus to a Physics major at Temple and now considers himself an avid amateur musician. “It’s not a game in the sense that you’re going to keep score. It’s a way to explore and play and get out of your comfort zone. You can do it alone or with a group, but it’s certainly not competitive in any way.”

The rules are simple: pick a card and follow the instructions. Where necessary, roll the three 12-sided dice, each side featuring one note of the chromatic scale, to select pitches. Some of the cards draw from basic music theory: play five notes in only one octave, or improvise over a repeated pattern or groove. Others are more abstract, instructing the player to improvise a piece inspired by an animal, or mute the TV and create a new soundtrack. Then there are some that draw on the graphic notation used by contemporary classical and experimental jazz composers, drawing a short graph with axes representing pitch, time, or other variables and asking the musician(s) to play that image. Hughes hopes these unconventional prompts will draw unexpected results from players who don’t know where to begin when it comes to playing spontaneously. “The whole game concept comes from the idea that a lot of musicians take themselves and music too seriously,” he explains. “The idea of play is vastly underappreciated. Musicians always talk about playing music, but I think that playful spirit is lacking a lot of the time.”

A Pittsburgh native, Hughes moved to Philly in 2006 intending to study music and become a performer. He lost the desire to make his living as a musician during his two years at UArts, saying, “I love music, but I just never saw myself as a performer. I realized eventually that it just wasn’t for me. My satisfaction is in studying and exploring music, not getting on the stage and playing for people.”

He created Tonic to address some of the deficiencies he saw in the academic approach to music, jazz in particular. In part, he wanted to create an aid for instrumentalists suffering from performance anxiety, as he did. “In music school there was a lot of emphasis on sounding like everybody else, playing jazz in ‘the right way.’ Everybody pays lip service to this idea that improvisation is about making mistakes and being free to explore, but I didn’t feel that.” He cites Effortless Mastery, the influential text written by pianist Kenny Werner, as a help for those issues. “Werner is all about getting musicians to relax and open up their minds, to put their hands on their instruments and just play without expectation, in a very meditative way. I think that’s a really valuable exercise.”

Another frustration was the issue of information overload that Hughes says he confronted at school. “Whenever you’re studying music at a high level, you’re going from class to class and every teacher has their own method,” he says. “Jazz covers a lot of territory, and you’re trying to give equal attention to Louis Armstrong and Robert Glasper. When you think about how many decades jazz covers, it can be stifling – you’re trying to master all of that in four years of school. So for the game I wanted to allow people to discard all this information about different stylistic periods and musicians and harmonic concepts, and get back to basics, think about tone and space and dynamics.”

Lastly, Hughes found that much jazz education remains mired in the bebop era of the ‘40s and ‘50s, with less of an emphasis on more modern innovations. He was inspired to draw on more modern classical composers like Karlheinz Stockhausen and Iannis Xenakis and jazz thinkers like Anthony Braxton and John Zorn for some of his cards. Zorn, in fact, wrote a series of “game pieces” early in his career, the most famous being Cobra, which conducted ensemble improvisation by the use of game-like rules.

Trombonist and composer Dan Blacksberg, a longtime member of the Philly improvised music scene, says that pieces like that differ from Tonic in their intentions. “The people who generated a lot of these techniques – Stockhausen or John Cage or Pauline Oliveros – what makes their work compelling is that it’s their natural music that they decided to make a life’s work out of. Those tools are used as means to an end, which is the creation of music. [Hughes is] trying to distill information in a more immediately accessible way, which is worthwhile. It seems like a pretty simple way to cover a lot of the stuff that you’d get in a more general improv class.”