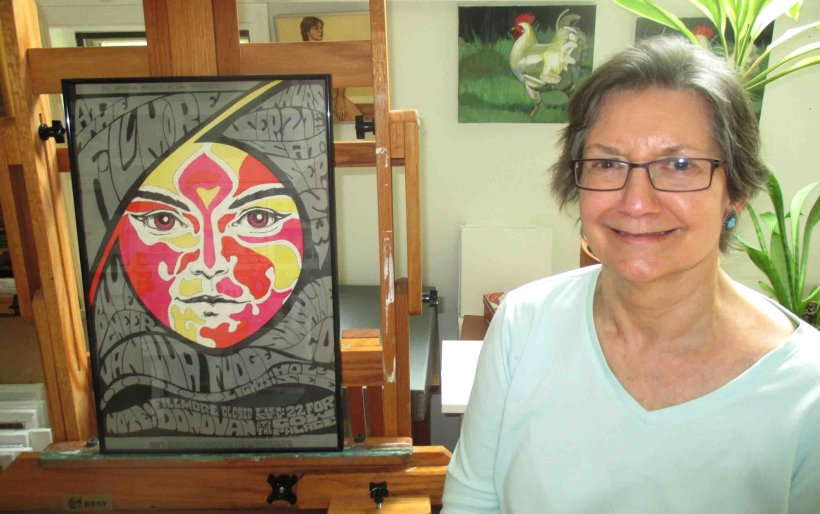 Bonnie MacLean | Photo by Randy Alexander | courtesy of the artist

A conversation with Bucks County’s Bonnie MacLean, Fillmore poster artist past and present

In the late 60s, Bonnie  MacLean happened to find herself at the right place in the right time. The Philly-educated artist had done stints working in New York and D.C. but wasn’t happy either place, so she gave it a go moving west. Living in San Francisco and working at her then-husband’s music venue, The Fillmore Auditorium, MacLean began illustrating the coming attractions marquee inside the venue – when a job opened up designing posters to advertise the club all around the Bay Area. She jumped at it, and worked as the in-house illustrator for The Fillmore from 1967 to 1971, helping shape the look of American psychedelic visual art.

Interestingly, in a phone interview this weekend, MacLean admits that she didn’t see her work at the time as aesthetically groundbreaking – for all that it looked tripped out and super cool, with its neon faces and interlocking wavy lettering, she points out that it was ultimately advertisement designed to push a commercial message. She loves the way it has grown into an art form in the decades since, and was surprised and humbled to have her work featured in Summer of Love: Art of the Psychedelic Era, a 2007 exhibit at the Whitney Museum of Modern art

Today, MacLean lives outside of New Hope, where she’s called home since 1972 – and still occasionally lending her artwork to the music world, including a commemorative poster she’s designing for the newest Fillmore venue, opening in Fishtown this Thursday with a show headlined by soul-pop faves Hall & Oates. “I think it’s very fitting that it should be in Philadelphia,” MacLean says. “It’s always been a music city, so it’s nice that there should be a Fillmore here.”

Below, read my conversation with MacLean about her posters, the intersection of art and advertising, and her preference for working by hand.

The Key: When you created a poster, was the design – the color, the imagery, everything – entirely your conception, or was it something you collaborated with the bands or promoter on?

Bonnie MacLean: I didn’t collaborate with anybody, Bill didn’t seem to want to have it done that way. The one thing he wanted the most, naturally, is for the information [about the concert] be available and to be understood – it had to be there, it had to be legible. But he didn’t have an agenda beyond that. He didn’t suggest the posters have any kind of imagery, he didn’t suggest anything in particular. We were free to do what we wanted to, and that was a treat – I liked that part a lot. 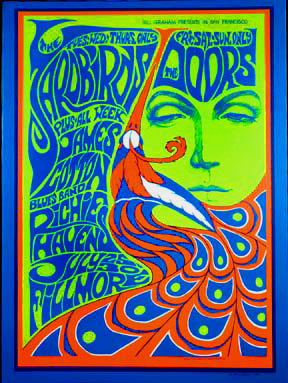 TK: What was the most memorable poster design you did and why?

BM: One of my posters was exhibited in 2007 in the Whitney Museum in New York, and they and used my poster BG #75 [advertising The Yarbirds and The Doors in 1967] to advertise show. It’s still my most popular poster, and the most significant for me.

TK: Did you ever imagine when you were designing in the 60s that your posters would be in galleries and museums one day?

BM: No, I did not. All that success of the posters of the developed over years surprised me. I knew people were collecting in those days, but I did not know that it would reach the heights that it has. My posters are in museums all over world now – it’s amazing.

TK: How long did your poster art gig run and what other sorts of art have you done over the years?

BM: I designed a total of 32 posters; I was off the scene by 1971, though, so it was not a long time doing it. I got the opportunity after having done posters to work full time as fine art artist – my second husband was a painter – we moved to Bucks County in 1972 and I’ve done lots of painting since.

I still do an occasional poster, though. There was an exhibit on Bill Graham show in LA, at the Skirball Cultural Center – I made the poster for that show. Wonderful show, we were all so impressed at what a good job they did showing Bill’s life beginning to end in an intelligent chronology. It’s going to become a traveling show in some form.

TK: What can we expect from the Hall & Oates poster?

BM: I tried to make it as much as possible the style of the posters of 60s, which was all handwork then – unless some artists did collage, which I never did. I always drew my work by hand, still my preferred way to work.

TK:  Why is that? Do you ever incorporate digital design?

BM: I guess that’s fine if you like to do it, but [computers and design programs] aren’t always dependable with an accurate image. And it’s certainly not handwork. I think handwork needs to be kept alive. It’s something people are inclined to do naturally, it’s something we have a human built in desire to do. It always has been, it still is. A computer is an accessory, but maybe not best way to do the work in my opinion.