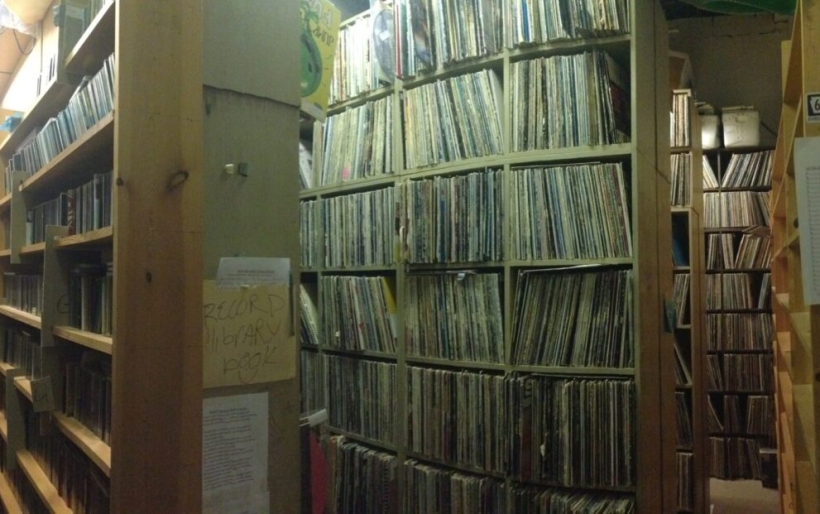 There’s a crackle in Chris Burrell’s voice as he leads me down a flight of stairs and through the doors of Drexel’s student-run station, WKDU.

It’s not the sound of exhaustion, or not exactly – even though he has been pretty much awake around the clock for a couple days at this point. It’s super-exhaustion, or perhaps supra-exhaustion is the proper term…it’s that point where you’ve been awake for so long that you’ve gone past being tired and have hit your second wind. Or third or fourth. The little obstacles take on less importance, the stamina has rebounded to peak levels and freaking nothing is going to stop you from attaining your goal, whatever it may be.

For Burrell, and the WKDU staff, the goal is playing electronic music of various stripes – from trance to house to grime to expertly-crafted DJ mixes – for three days straight. We walk into the studios, bunkered down for Electronic Music Marathon 2015, and the smell of falafel is in the air – University City businesses have been donating food throughout the weekend, and the current delivery came care of Mama’s Vegetarian. On the couches are three major players in the Philly DJ community – King Britt, Cosmo Baker and Matthew Law. King was on the air earlier in the afternoon, Cosmo has a set coming up at 5, and Matthew just wrapped up a beat-tastic performance. The three were chatting about gigs, reflecting on their craft and catching up in general – King and Cosmo have been friends for a couple decades, Matthew has been tight with them since coming on the scene with the Illvibe Crew in more recent years.

The variety of DJs is one element that makes EMM unique. This isn’t one or two people on the decks and dropping mixes for days; this is a few dozen contributors who cross-section of the Philadelphia DJ community. Some (like King) are brought in as celeb guests, others signed up for a shift as a means of supporting the station and its annual fundraiser. Money brought in from the EMM over its 78 hour run will be split between KDU and the Mural Arts Program. But even with a rotating door of DJs dropping one- or two-hour sets, the participants aren’t rushing to leave. They get there early and stay late, and use the time (as Cosmo, King and Matthew did) as almost a high school reunion. No visit to KDU is complete without checking out the station’s storied vinyl library, so Burrell walks me over to take a look; I’ve seen entire apartments smaller than this room, and it’s stacked floor-to-ceiling with records, records, records. This is another thing EMM DJs do when they have downtime; pop in and just browse. Burrell tells me that King asked about returning to the station some time just to spend an afternoon digging. Some DJs want to theme their show around records, but look at this room and don’t know where to begin. Others, like the one currently on the air, come prepared. DJ Rich Medina is set up behind two turntables and a mixer. To his left is an olive satchel, his trademark, containing a couple hundred 45 RPM singles. 45s are Rich’s specialty, as is showcasing lesser-heard source material. Many songs he’s playing are oldies-but-goodies that showed up as popular samples in DJ music, hip-hop, electronic and pop; during his hour-long set, we heard instrumental hooks later repurposed in L.L. Cool J’s “Mama Said Knock You Out” and Mark Ronson and Bruno Mars’ “Uptown Funk.”

Not everybody gets it, though, and a commenter pops up on the EMM Facebook event page saying “Somebody tell Rich Medina that this isn’t electronic music.” Burrell shakes his head; that’s a superficial read. Rich’s set is more nuanced than that, maybe even a little subversive. “He’s dropping knowledge on everybody and they don’t even realize it,” Burrell says. Music non stop is the substance of EMM, for sure, but telling people that it’s happening is equally important. Like that tree that falls in a forest and its questionable sound-making, if a DJ spins a killer set and people aren’t tuned in, did it happen? Well, yes, obviously it did, the EMM archives attest to that. But still – it’s best to listen live, because you never know what you’re going to hear. And Burrell along with Peter Liu and other KDU staffers kept the Twitter and Facebook and Instagram channels poppin’ all weekend. If you were aware of KDU on some level, the was no way you didn’t know this was happening, and more than likely you found yourself tuned in to some stretch, whether it was the block of Saturday afternoon house jams that I switched on while editing stories for The Key or the fierce Dave P set that closed out the EMM Monday night from 10:30 to midnight. It’s one of the most unique and tremendously positive stunts in Philly radio. It also shares a certain quality with some of the things we do here at XPN, like our annual countdown (ahem vote here ahem) or the #1 Hits of whatever decade, where there’s a sense that there is a wide, wide swatch of listeners tuned in, an audience that is locked on and afraid to switch the dial, taking it all in and experiencing it collectively. EMM has that, and the variety it delivers is unreal. “These past few days, I’ve heard maybe two songs repeat,” Burrell says. “That’s it. This is about digging deep.”

#2015EMM is a wrap as of Monday night; the DJs are gone, the WKDU staff is catching up on sleep, but it will live on; later this fall, many of the sets will be posted to Soundcloud. Not long after, planning will begin for 2016. And as of right now, listeners can still contribute to the fundraising cause, either via a direct donation or by picking up an EMM merch bundle. The latter might be the way to go; the t-shirts are pretty sweet.

Until the 13th annual!