Like most people, I experienced Live Aid not in the massive crowd of Philadelphia’s JFK Stadium thirty years ago today, but in the televised broadcast that had people watching around the world.

The all-day concert was held in London at Wembley Station and Philadelphia at JFK Stadium; it was organized by musicians Bob Geldof of The Boomtown Rats and Midge Ure of Ultravox to raise money for the people of Ethiopia. The country was experiencing a famine due to drought – among other factors. After the success of their charity single “Do They Know It’s Christmas Time?” – as well as Lionel Richie and Michael Jackson’s “We Are the World” – the time was right to strike while the giving iron was hot.

The fact that Philadelphia was chosen as one of the cities to host was probably 20 times more surprising in 1985 than the Pope coming here this year. I didn’t realize this as a child, but Philadelphia was considered somewhat of a cesspool in the 80s – so it was a lucky break that the producer of Live Aid, Tony Verna, was a local guy and was friends with Mayor Wilson Goode. Then again, Philadelphia has always been known as a music-loving town; maybe the thought was New York can’t get everything and that it was our turn.

Both concerts were broadcast on MTV and ABC, bouncing back and forth between Wembley Stadium and JFK. I was 8 years old when Live Aid happened so my memories are a little hazy. I remember getting up really early, turning on the TV, hearing Joan Baez sing “Amazing Grace” and thinking “Man, this chick is terrible.” I also remember seeing Status Quo and thinking “Man, this band is terrible.” When my mom suggested we blow this popsicle stand and go to Granite Run Mall, I wasn’t too sad to miss the all day inundation of pleas to give to USA for Africa by Sally Field and other celebrities.

If memory serves me correctly, Madonna was on during the afternoon because I was in the Sears furniture department watching her on the TV with about 10 other people and really grooving to “Holiday.” (I read the next day that people were throwing trash at her because she wasn’t the Led Zeppelin reunion or something.)

I recall bits and pieces of the rest: Queen singing “Radio Ga Ga,” Bowie singing “Modern Love,” The Beach Boys with a very out of it looking Brian Wilson, Mick Jagger singing with Tina Turner, and of course Paul McCartney singing “Let it Be.” I also remember Mick Jagger and David Bowie’s video for “Dancing in the Streets” being played ad nauseum throughout to the point that to this day. I can probably reenact it move for move.

About 10 years ago, I rented the Live Aid four-disc set from Netflix and relived / experienced for the first time the magic of that day. For one thing, Joan Baez is a national treasure and I realize that now. For another, most of the bands played the set of a lifetime. In London, Sting and a young Branford Marsalis collaborated on “Roxanne,” The Style Council performed an energetic and inspiring “Walls Come Tumbling Down,” and my favorite, David Bowie, ran through his set in what seemed like double-time the whole way through up until “Heroes,” which he dedicated to his son and had Thomas Dolby guest on keyboards.

While London got more of the hip acts, concert promoter Bill Graham delivered on the living legends side for Philly, getting many of his pals to come on stage and in some instances, put differences aside for a good cause. Heck, Phil Collins played both London and Philadelphia and covered the drums for several acts.

I put together a list of the 10 Philadelphia clips I think are worth giving a watch. Of course, feel free to disagree in the comment section.

This was Pendergrass’ first live appearance since his accident on Lincoln Drive that left him paralyzed from the waist down. You wouldn’t know it from the confidence he exudes in this touching performance. He doesn’t seem like he’s been away from the stage at all and prefaces the song by telling the crowd to really listen to the words and understand what they mean on the day of Live Aid.

Yes, that list of names seem to sound familiar…it’s Led Zeppelin and some ringers, duh! Many were not happy with this performance including Page and Plant themselves but I’m not seeing the problem. I guess because it was the middle of the day and they look like they’re enjoying themselves and not being dramatic or something. Also, Plant cheekily refers to that line he gives in “Song Remains the Same” but oh come on it was the 80’s! Didn’t we all wear gold chains and jump around in white sneakers back then to epic songs about dark arts?

“Good Vibrations,” is not an easy song to pull off live but this is an excellent relic of when the Beach Boys were part great musicians and part showmen. Mike Love and Brian Wilson seem like they’re in totally different bands for totally different reasons. Regardless, the crowd was taking in the summer vibes and loving every second.

“Into the Groove” – Madonna

For those who think Madonna stunk up the joint with her pop songs and her dancing, I present this as evidence to the contrary. This is a really fun version of the song complete with fun dance moves. People are throwing things at her and she could care less because she’s Madonna and you’re not, deal with it peons!

“All You Zombies,” – The Hooters

Philadelphia favorites The Hooters were put on the bill at the last minute by Electric Factory because Philadelphia takes care of their own. Bob Geldof was apparently not happy with this but karma bit him in the you know what when he ended up opening for the Hooters in Germany back in 2004.

Speaking of Philly, Ms. LaBelle took this Bob Dylan song to such another level that I’m pretty sure she had forgotten what song she was even singing by minute 3 into this 6 minute rendition.

If you have never seen this, OMG, you need to see this. The always charismatic Run-DMC kill it and shut up the rap haters in JFK.

“In the Air Tonight,” – Phil Collins

The first time I’ve ever seen Collins do this one with just a piano and vocals. What happens after the line “It’s no stranger to you and me” made me realize there was never a time when people didn’t air drum to this song.

Another pop group that Philadelphia lucked out on, Duran’s set was way more competent than most rock fans gave them credit for. Comparing this now to Judas Priest’s lethargic set earlier in the day, I’ll bet there were a few “rawk” fans grooving to these jams.

Hall & Oates gave the world a preview of their album with Kendricks and Ruffin by performing some of the Temptations’ most famous numbers while they acted as backup singers. You don’t usually think of smooth rocking H & O as a band that brings the party but this set probably had both parents and kids dancing up a storm in front of their televisions. 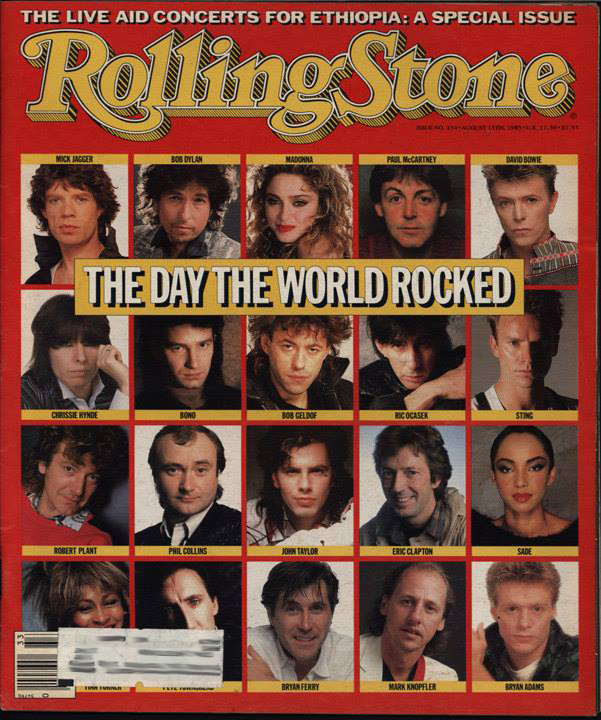