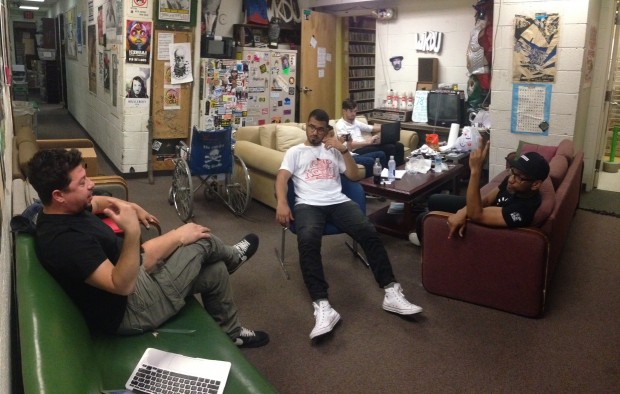 DJ Cosmo Baker, DJ Matthew Law and King Britt chat after their sets in the WKDU Lounge | Photo by John Vettese for WXPN

DJ Cosmo Baker, DJ Matthew Law and King Britt chat after their sets in the WKDU Lounge | Photo by John Vettese
WKDU held its annual Electronic Music Marathon from October 9th through October 12th. The event was a 78 hour, nonstop DJ curated radio-thon bringing together a diverse group of some of the best DJ talent in Philly to raise money for Philadelphia Mural Arts & WKDU. Over 40 DJ sets from the EMM have been posted to WKDU’s Soundcloud.

Some of the DJ’s that particpated in this year’s EMM included Dave P and Making Time RADio, Matthew Law, Cosmo Baker, Rich Medina, Data Garden, Jack Deezl, Wax Poetic Records, Spank Rock, King Britt and others. Each year, the EMM gets better and better, filling an under served, important need for the vibrant electronic music community in Philly. This year, The Key’s John Vettese visited the WKDU studios during the marathon and sat in on the final hours of it.

As Vettese pointed out:

The variety of DJs is one element that makes EMM unique. This isn’t one or two people on the decks and dropping mixes for days; this is a few dozen contributors who cross-section of the Philadelphia DJ community. Some (like King) are brought in as celeb guests, others signed up for a shift as a means of supporting the station and its annual fundraiser. Money brought in from the EMM over its 78 hour run will be split between KDU and the Mural Arts Program. But even with a rotating door of DJs dropping one- or two-hour sets, the participants aren’t rushing to leave. They get there early and stay late, and use the time (as Cosmo Baker, King Britt and Matthew Law did) as almost a high school reunion.

Below, listen to the sets from this year’s EMM. And our congrats again to WKDU for pulling this off.