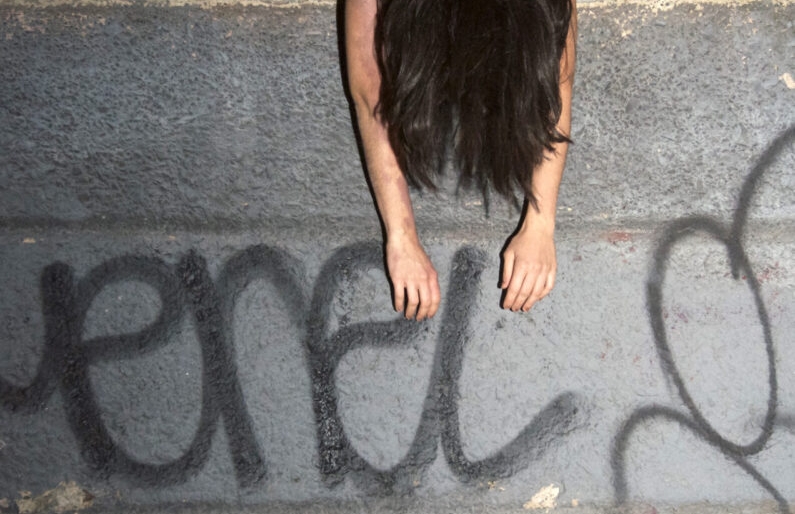 Aphra | photo by Megan Matuzak | courtesy of the artist

Over the last few months we’ve been getting slowly acquainted with Aphra, the solo project of Tutlie’s Rebecca Way. We were first introduced at Ortlieb’s back in July of last year when Way opened for Vita and the Woolf; crossed paths again at another Vita show this September at Johnny Brenda’s; and we picked her brain about remixing Youth Lagoon in October. Way recently picked up some steam and is now a pretty frequent name on show bills. All of that has been leading up to the release of her new EP Sadness Is a Gesture, which will be out next spring. Today we have the premiere of “Geranimo,” the album’s first offering to our ears.

A gently cranking musicbox opens the reflective “Geranimo,” setting a solitary mood that lines up with its soul-searching inspiration. Way flexes her production muscles on this track, striking a balance between minimalist simplicity and sparkling layers. Her vocals are no doubt the centerpiece though, as she bares her soul through a song influenced by the spirit of Bedonkohe Apache tribe leader Geronimo.

I got freakishly inspired when I got home from tour with Tutlie last March. Those three weeks were strangely so relaxing and reflective. I spent so many hours staring out the window of the van listening to everyones music and reflecting. I think I subconsciously took in way more than I was aware of, so that by the time I came back I felt so centered and self aware.

The song isn’t just about a romantic relationship, its about taking responsibility for your feelings, whether it be sadness, anger, frustration ect. In the song, I’m rallying for myself (and other females particularly) to get in touch with what they’re really feeling, let it wash over them, and attempt to make sense of what those feelings mean. Modernity pressures all of us to distract our selves, from our selves. Those three weeks really forced me to pay attention to how I’ve been neglecting whats going on inside me.

Listen to the premiere of “Geranimo” below and see APHRA live at W/N W/N on November 27th and at Ortlieb’s on December 11th.