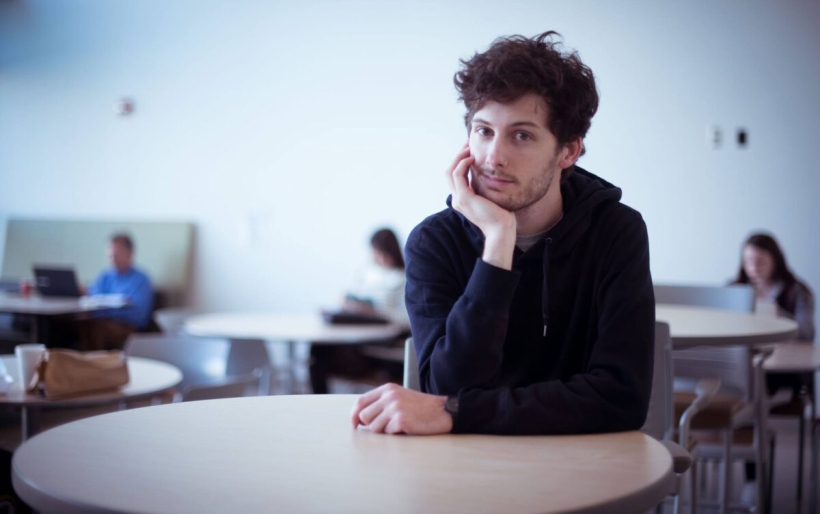 No Stranger | Photo by Emily Dubin

No Stranger explores life and regret on his introspective EP Haste

Haste is the title of Jonathan Cooney’s new EP, and it’s an appropriate name. The fleeting two-track EP was recorded over the span of two days with Cooney, who records under the stage name No Stranger, and his friend Sam Berry.

The result is an EP that is shockingly cohesive and alluring, given how little time was put into it. Cooney’s crisp, emotive vocals are reminiscent of early 2000s emo, while his quietly prolific acoustic guitar approaches the somber, introspective moods of Elliott Smith and Carrie & Lowell-era Sufjan Stevens.

Cooney’s singing never wavers over the course of the EP, shooting straight as an arrow into his critical sense of self. On “Three Words,” he laments a relationship he has allowed to fade, singing “Why did I / allow this to drift away / across the lines of these states.” He turns his tired gaze outward on “Great Grey Towers,” singing with a twinge of frustration, “It’s time to fall / in line and out / of love with your lofty dreams.”

Yet even in these lines, you can feel Cooney’s own feeling of regret, as if they’re intended just as much for himself. Cooney may have recorded Haste in only two days, but in this rush he’s managed to unearth two deeply moving tracks that are anything but fleeting.

You can stream Haste below, and check out No Stranger’s Bandcamp here, and see No Stranger tonight in New Brunswick.