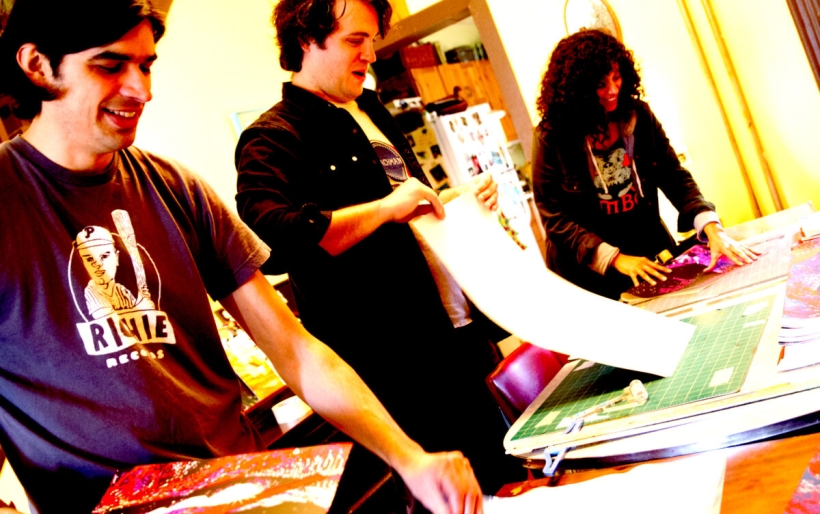 Jason Killinger steps through the front door of Atlantis: The Lost Bar onto the Frankford Avenue sidewalk in Kensington. He’s all smiles and greets me warmly with a firm handshake on an unforgivingly cold mid-November night. The guitarist and singer of Spacin’ is feeling good because he has Total Freedom on his mind.

Taking a table near the door he recalls May 2014, the month he became a strictly freelance-based graphic designer. It was the beginning of a time that actually proved to be challenging for him – he initially hoped it’d lend him more time write music and create his own art. However, he found the exact opposite, and recording Total Freedom, the upcoming album from the Kensington-based oft-spacey garage rock band, became a long process.

Tracks from the album come from a variety of recording sessions as long ago as two years, after Spacin’ played a string of shows in Spain in Portugal, but also as recently as this summer. But for a band such as this one, which thrives off impromptu moments, as well as a surplus of recordings, they’re able to find tracks for an album somewhat simply. One of those spontaneous moments came when he and wife, Spacin’ drummer Eva Killinger, recorded the first single of the album, “Titchy.”

“‘Titchy,’ is actually just Eva and I,” Jason Killinger says of the ultra lo-fi song. “One night we just decided to go down to the basement and record. I’d been playing around with the riff for a while so I just decided we should try it and we ended up using it on the album.”

Similar to that scene was when Killinger and guitarist Paul Sukeena were playing together casually one night. Suddenly Sukeena was just picking his guitar by himself, not really playing anything in particular and unknowingly being recorded by Killinger. It was “B.I.S.,” the fluttery, yet subtly beautiful opening track of Total Freedom’s B side. In that unplanned moment, Killinger knew there something special about what Sukeena had just played and decided it had to be on the album.

The lo-fi nature of Spacin’ isn’t just aesthetic. Basement sessions are how the Killingers, bassist Sean Hamilton and Sukeena work regularly. Their upcoming album also features guitar tracks from Mike Polizze, Jesse Trbovich and Uriah Killinger, Jason and Eva’s son. Jason Killinger records every practice and says he has “graveyard” of broken four-track recorders, some of which are full of jams that will never be heard. But when he isn’t with the rest of the band with a four-track handy to record, he documents his ideas on his cell phone, now that he found it better than his usual portable recorder. “I have a hand-held Tascam recorder that I use to record shows,” he says. “Then suddenly I realized I don’t have to use it anymore when I got a better phone. I used to carry a bag and have all these things. I think in 2008 I quit smoking. So, to do so I would carry around a bag of shit that could distract me from smoking. I’d have a camera, my Tascam, a sketchbook and tea tree oil toothpicks.”

Being struck with an unexpected idea can be a big moment for musicians. That idea may be a moment in time that can’t be recreated. Taking an impromptu jam to a certain point can be what helps discover the riffs or melodies they need for developing a song. And at that point a musician may just be playing behind his or her own raw emotion. That’s the way Total Freedom vibes; it’s highly emotive to the point of nearly being visual.

Some of the album is constructed with much intention on Killinger’s part. “Kensington Real” is an attack on the eardrums at first listen with its cutting dissonance. However, he says there’s more behind that just an abrasive lead into the swaggering “Human Condition.”

“That song’s about my neighborhood,” Killinger says. “It’s like the sounds that you hear in the neighborhood. Imagine in the background reggaeton on a big sound system and then sirens and the trains and stuff.”

Rodger Binyone, a Philly-based artist, worked with Killinger on some of the album art. He says in an email that they listened to the record a lot while painting and found that its “vibe is exacting,” and that it flows. And he’s exactly right about that, as Killinger says the album’s songs are very connected, starting on a personal level from his own neighborhood and growing outward to the world at large; and that’s clear on the 10 minute “U.S. Ruse,” a loose stomper that borrows a verse from “The American Ruse,” by the MC5.

There’s a clear tension to Total Freedom, but at times is tough to pin down, even though the Spacin’ guitarist speaks of a “weird, anxious undertone” throughout. (You can hear another song, “Over Uneasy,” streaming over at Aquarium Drunkard.) Coming from a guy who’s been sharing laughs and coming off so candid while talking with me in a Kensington bar blaring some far-out psych rock, it’s hard to imagine him feeling uptight about anything. However, even if a lot of Spacin’s tunes come from spontaneous ideas and deep impromptu basement jams, the feelings behind them, he says, were inspired by turbulent world events of recent years, citing the last four years in particular.

He goes on to say that the last song, the title track of the album, is meant to feel like the release of that tension. And one guitar track on it came from a typical Spacin’ moment: jamming late at night. But this time in Trbovich’s South Philly rowhome instead of Killinger’s basement.

“We were over at his house playing guitar one night, recording some takes to see what we’d get,” Killinger says. “Then we were listening to some records after recording and it was getting a little late. Then all of a sudden [Trbovich] just goes, ‘Let’s do one more, all the way up.’ And he has some amp that he built, he turns it all the way up with the mic all the way up on his amp. I was like, ‘What about your neighbors?’ And he just says, ‘It’ll be fine.’ He just start playing so loud and smirking, and it ended up being the take we used.”

Spacin’ celebrate the release of Total Freedom at Everybody Hits on December 19, 9 p.m., with Hothead. More info here.