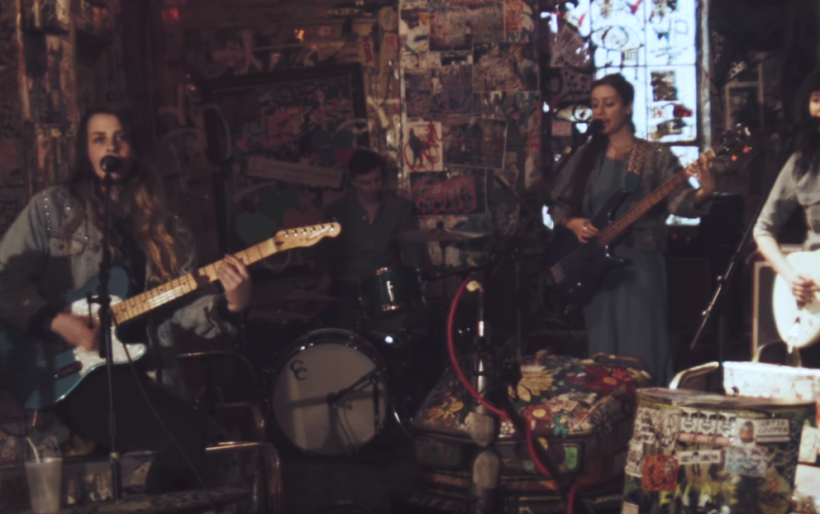 Queen of Jeans perform in their SwellTone Session

By John Vettese
January 04, 2016
09:01 AM
Share
Queen of Jeans perform in their SwellTone Session

It’s no secret we love us some Queen of Jeans around here at The Key. The Philly punk / pop four-piece is gearing up for the January 22nd release of its self-titled debut EP on Third Uncle Records, and has a lot of exciting stuff on its calendar surrounding it: a Key Studio Session coming out on 1/19, an appearance at JUMP Mag’s Red Bull Sound Select showcase on 1/21 and their headlining album EP release party at Kung Fu Necktie on 1/30.

Running up to all that, the band recorded a very fun music video session with local blog Swell Tone, shot in one of the last remaining vestiges of punk on South Street: the great eatery / drinkerie Tattooed Mom.

For the video, filmmaker Bob Sweeney and I set out to capture the playful romantic essence of the song in a setting that had just as much character. The lovely staff of Tattooed Mom in South Philly allowed us to fill their one-of-a-kind space with all the sweet harmonizing, lollipop-sucking, pool-playing, hip-swinging fun that Queen of Jeans has to offer. Splicing in shots on black and white Super 8 and color 16mm film, Sweeney perfectly showcased the group’s lively personality, reimagining the tune as though the group was singing it to themselves.  Scott Stitzer and Nick Barnes of Stolen Studios also did a great job of soaking up the song just the way it reverberated amongst the graffiti-coated walls of Tattooed Mom.

Watch the video below, and get tickets and more information on Queen of Jeans’ upcoming gigs at the XPN Concert Calendar.