Escort will accompany you to disco paradise, 2016-style - WXPN 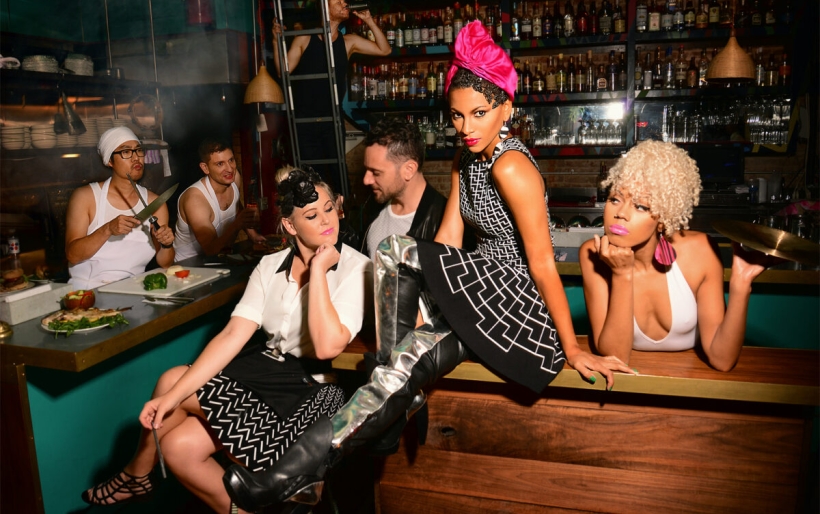 Escort | photo by Shervin Lainez | courtesy of the artist

Escort will accompany you to disco paradise, 2016-style

The past decade or so has seen “disco” rehabilitated from a dirty, shameful word to a hallmark of hipster sophistication (and, in recent years, a resurgent, fully mainstream pop phenomenon) – and it’s not too far-fetched to suggest that Brooklyn’s Escort played a role in that transformation.  They’ve certainly been along for the ride.  Launched in 2006 as a studio-bound duo project – the brainchild of DJ/producers Eugene Cho and Dan Balis, Escort eventually expanded into a whopping seventeen-piece live ensemble: not so much a case of wanton, coke-addled excess as simply the number of players necessary to faithfully replicate their meticulously detailed, vintage-inspired string, horn and percussion arrangements.

I caught up with Cho in advance of the band’s first-ever Philly headlining show (following a “not particularly memorable” 2013 TLA set opening for JC Brooks and the Uptown Sound), who explained that – somewhat disappointingly – their typical live set-up these days, including for next Friday’s Underground Arts gig, is scaled down to a relatively svelte five members: drums, percussion, guitar, Cho on keyboards and, bien sûr, the band’s dynamite French-African vocalist/bassist/fashionista frontwoman extraordinaire, Adeline Michèle.

Of course, disco was never really about live performances in the first place, which is part of what makes Escort such a unique and enticing proposition – as Cho says, “it’s fun to bring live something that is usually not seen that way.”  And their umpteen-members-on-stage approach was never, historically speaking, particularly authentic: “even if you look at old Soul Train videos – which, obviously they’re not necessarily playing it all live – but: the bands are small.  Now we’re taking a much more Soul Train approach with the live show.”

Actually, a pared-down line-up does make some sense for the sleeker, more muscular and synthesizer-driven grooves of last year’s sophomore LP Animal Nature, an album that preserves the spirit of Escort’s more straightforwardly revivalist early singles (the backbone of their self-titled 2011 debut) while handily exemplifying the readily blurred lines that (in theory) separate “classic” disco from its later incarnations as house music, dance-pop, electro-funk, etc.  (“A lot of people think about disco and they don’t think about Off The Wall,” Cho points out, “when Off the Wall is really the best disco album ever.”)

Animal Nature casts a wide enough to net to embrace both a glistening, glitchy Italo-fied cover of St. Vincent’s art-rock freak-out “Actor Out Of Work” and a barnstorming, horns-blaring live rendition of Gino Soccio’s 1979 funk-nugget “Dancer,” along with eight typically smart, elegant originals that nod to everything from ‘80s boogie to ‘90s piano house to zany Ze Records tropicalia to ebullient, Nile Rodgers-style riffage (a sound equally at home 1977 and 2013.)  Besides the ‘70s and ‘80s influences which are “definitely always there – sort of ingrained in us,” says Cho, he and Balis took inspiration from more current house tracks they’d been spinning; most notably by Disclosure and Julio Bashmore.  “It always stems from what we play as DJs, so following that has influenced the direction of what we’re producing: we always want to do stuff that works realistically for DJs”

Speaking of disclosure: I should perhaps mention that Escort’s drummer, Ben Herson, happens to be my second cousin, although I wasn’t aware of that connection until I’d been grooving to their singles for several years.  Herson and Cho came up together, as high-schoolers, in the third-wave ska revival of the 1990s, playing in the suburban Boston ten-piece Skavoovie and the Epitones – which may have provided some unwitting preparatory lessons in reviving older dance-music styles, as well as the touring logistics of oversized ensembles: “The norm in the third wave was these ridiculously big bands; we’d all get into these tiny vans and tour around, so for me that seemed like a normal concept…get a bunch of horns and strings and do all this stuff and it’ll just be fun – and it is!”

Even if Escort is, musically and aesthetically, a far cry from ‘90s ska scene, the guiding ethos and ultimate goal remain the same: “Everybody just wants to have a good time and play, rather than get their own musical expression out with every single bar.  I’m not downplaying the artistic side of it all, but it’s not about people showcasing their own talents or their own thing; it’s definitely a group thing… in a way it is similar to ska, where it’s all about dancing for the kids.”

Escort headlines Underground Arts on Friday, January 29th; get tickets and more information on the show at the XPN Concert Calendar.