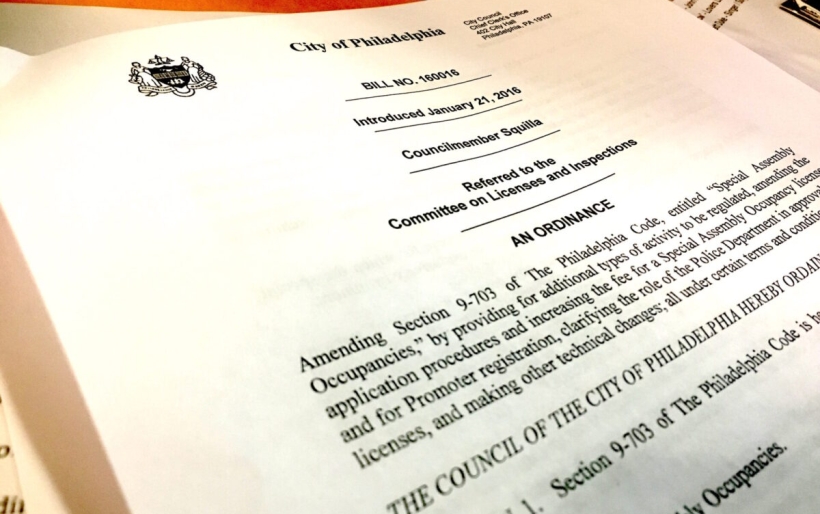 Yesterday, Philadelphia City Councilman Mark Squilla announced that he’d withdraw his controversial music venue legislation – putting an end to something that, as I saw many voices echo on social media yesterday, shouldn’t have been an issue in the first place.

But in all the uproar over Bill 160016, there was one massive positive – and that was the collective conversation that emerged from the Philadelphia music community. When BillyPenn broke the story on Wednesday, January 27th, it didn’t take long for it to climb right to the top of our collective Facebook feeds. Everybody was upset, from the Philly hip-hop scene to the punk scene, singer-songwriters to bluesy rockers, venue promoters and artist managers alike – people saw the bill’s proposed restrictions on performance spaces as a direct attack on the Philly music scene and the exponential growth it experienced in recent years. Voices were raised. Marches were planned. Town hall meetings were organized.

And less than a week later, our elected officials heard the outcry and retracted the bill. This is what democracy looks like, people.

To be fair: Squilla was acting on the up and up. For those not familiar with the ins and outs of local government, the way a bill becomes a law is by an anthropomorphized scroll climbing up the Capitol steps and singing a super catchy song about…oh wait, nevermind, that’s Schoolhouse Rock. (Yes yes, I hear you, groans from the 40-and-over set.)

Seriously though — once a bill is introduced into City Council, legislators go on a R&D mission, consulting stakeholders in the community and vetting the bill’s provisions, then opening it up to a public hearing, then taking a vote.

As Squilla told a group of music industry representatives yesterday, this was the exact process he was following. Once the bill had been introduced on January 21st, he moved on to consulting with venue owners in his district. When the BillyPenn story hit, he had just begun to hear skeptical feedback from them. And before he could get any further, the music community’s collective voices came to a roaring crescendo, stopping the process in its tracks.

Squilla was following procedure – we just got involved and had our say much sooner (and louder) than anticipated. And, arguably, for good reason.

It’s true that BillyPenn’s report did focus on one sub-section of a very complicated legislation. One that, if we’re being honest here, I haven’t even read cover to cover since legalese makes my brain ache. It could be argued that they took a minor detail and blew it out of proportion. Is the Orwellian “registry” an accurate term? Possibly not, as the bill’s language just called for license-holding venues to “maintain and produce for inspection upon request” a contact list – one can diplomatically read this as venues themselves keeping the information “just in case.”

But the devil is in the details, and that language can be interpreted in other, more dubious ways as well. And once it’s passed into law, it could have had profound ramifications. As Squilla admitted yesterday, “We can vet something, introduce it, and then something happens down the line where we say ‘wow, I never thought something like that would happen because of the bill.’”

Maybe “registry” wasn’t completely accurate on the surface, but it got our attention – no kidding, it grabbed our attention – and became a point for the music community to rally around, to make us aware of how our government affects us and, more importantly, to get us engaging in dialogue about it.

Which gets back to my point about the conversation. The fact that the Bill 160016 was withdrawn shows the power that our music community has when we band together. It shows how big a part of the fabric of Philadelphia the music scene has become, from performers to behind-the-scenes players. The Philadelphia Inquirer‘s Mike Newell put it brilliantly in his column this Sunday:

…The outcry only offered more proof of how vibrant and vital Philly’s music scene has become. It has rightfully risen to national prominence. It is inextricably linked to the city’s newfound momentum. And it has become a powerful draw for young people choosing Philadelphia.

We don’t need to be embarrassing ourselves with stuff like this – looking like a bunch of narcs – when real momentum is happening in our city. When national headline after headline touts Philadelphia as the place to come and build a life.

Thankfully, as Councilman Squilla and Councilman David Oh showed yesterday, they can admit when they are short on expertise. They acknowledge that they need voices from the music scene to really craft laws that will work to everybody’s benefit. Their plans for a task force of musically involved citizens is a positive next step.

In short, they are willing to listen and engage with the music community. So the conversation shouldn’t cease now that we’re not pissed off anymore. It should continue.

When the news broke, I saw a number of my more cynical friends on social media make comments about out-of-touch City leadership and the uncertainty of mixing music with City Hall. Some referenced the PHL Live competition (which, yes, I have hosted a couple events for) and cracked jokes about “government-approved rock.” This is a totally punk thing of them to say – and I respect that since, in a sense, politics is the antithesis of rock and roll. These people probably aren’t looking to work with the City on music-related legislation any time soon.

But that might be their loss. I mean, let’s look at rock and roll, and music writ large, as part of something bigger. As something that’s not just countercultural and subversive, but pro-cultural and inclusive. As a vital form of expression that celebrates a spectrum of viewpoints in our city, and is part of that proverbial fabric that weaves us together. If this is something that the City wants to bolster – and true, they may not totally understand all aspects of the music scene’s inner working, or be 100% on board with all points of view expressed within – but if they are willing to work with us to get there, ultimately, that’s a positive thing.

In the meeting yesterday, Dyana Williams – president of the Philadelphia Grammy Chapter – urged Squilla and Oh to look to leading “music cities” as they craft future laws that affect our community. Austin. Nashville. Portland and Seattle. Cities that are thought of as music destinations, as music capitals. Next month, bajillions of singers and songwriters and rappers and DJs will descend on Austin for the monumental gathering that is SXSW, just one of innumerable year-round music events set in and around that city. It’s important to remember that stuff like it doesn’t happen without civic support.

If City Council is willing to listen to us, we should be willing to continue the conversation with them.