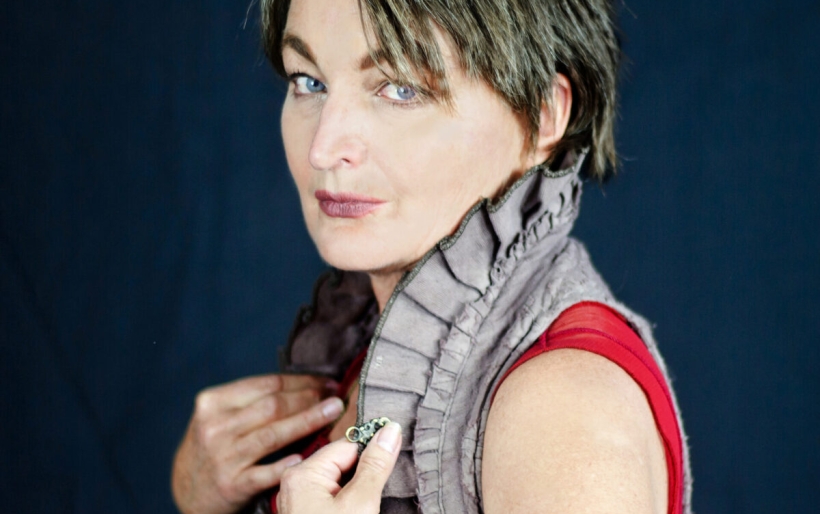 Jane Siberry | courtesy of the artist

The veteran Canadian singer and songwriter Jane Siberry will make a rare Philly appearance next Tuesday, at the Tin Angel.  She’s touring in support of Ulysses’ Purse, her first new record in five years and arguably her most substantial statement since her commercial heyday of the 1980s and early 1990s.  It may also be – as she told me by phone from New York, where she’s preparing for the tour – her “last formal record,” which is all the more reason to listen up.

In this century’s climate of obsessively re-discovering, re-issuing and re-evaluating seemingly every scrap of forgotten music from the past – and in particular, the music of the 1980s – Siberry’s output remains one particularly iridiscent stone left unturned.  It’s a rich, impressively varied body of work, spanning her folk-oriented, Joni Mitchell-ish 1981 debut; the brightly spunky new-wave pop of 1984’s (Canadian) breakthrough No Borders Here; 1987’s epic, layered experimental opus The Walking; 1989’s witty and accessible folk-pop charmer Bound By The Beauty and the trip-hop beat-loops and hazy, hymnic ambient-gospel invocations of 1993’s When I Was A Boy, her biggest international hit (containing her best known song, the k.d. lang duet “Calling All Angels”) and the album whose deeply earnest, non-denominational spirituality has largely set the tone for the remainder of her career.

She’s had considerably less visibility over the last twenty years – a period during which she’s explored various DIY approaches to the music business: setting up her own label, Sheeba, to issue a series of unconventional, often conceptual releases; using the internet to connect with and draw support from her a small but devoted following; pioneering self-determined pricing for downloads (several years before Radiohead). But there’s no reason Siberry shouldn’t enjoy the kind of veneration of peers and kindred spirits like Kate Bush, Laurie Anderson and Sinead O’Connor.  The lushly orchestrated Ulysses’ Purse is, for instance, no more esoteric – and no less ethereally beautiful – than Bush’s well-received 2011 comeback 50 Words For Snow.

Indeed, in emotional terms, it’s quite a bit more immediate and broadly relatable; every bit as warm and inspirational as you might imagine from song titles like “Hide Not Your Light” and “Everything You Knew As A Child.”  It is, essentially, an overt attempt to (re-)connect with a wider audience.  Siberry originally envisioned the project – under the working title Consider the Lily – as a “summary” of her Three Queens trilogy; a series of albums released “quietly, through my email list” between 2008 and 2011 (initially conceived during the period in which she sold off nearly all of her possessions and took on a new name/identity as Issa.)  She chose “the most universal and beautiful songs from the trilogy” and worked with the arranger/producer Peter Kiesewalter to make more “commercial” versions – but ultimately decided that “there wasn’t enough of me in it to make it worth it; it wasn’t the right kind of gift to give people.”

So she went back to the drawing board and, after several more years of work – playing most of the parts and doing most of the arrangements herself, and drafting in a wide assortment of Toronto-based musicians to complete her vision (including lang and fellow secret songwriting icon Mary Margaret O’Hara on vocals) – she’s emerged with a mixture of old and new songs forming a cohesive piece of work that Siberry describes as “more universal recording, meant for a wider audience.”  (She still hopes to release the Kiesewalter version of the record in the future – she has nothing but praise for its “really interesting”and “beautiful arrangements” – saying “this is the perfume; the other one will be the eau de toillete.”)

Old fans and new listeners alike should cheer the return of her wise, expressive, endearingly warbling voice and her profoundly honest, often impressionistic and at times unflinchingly personal ruminations on love, beauty, and the emotional interconnectedness of all things.  Her lyrical approach – unafraid to be unabashedly heartwarming and motivational – is not something you encounter very often in pop or even folk music, so it makes a lot of sense that she describes relating more closely to jazz musicians: “I can really sense they’re hunkered down and working with the stars, so to speak – I don’t know how to say it other than that – and that’s all they’re thinking of when they write, and I trust that, as opposed to the more pop world where people are writing with a different self-consciousness.  I hear it and I go ‘wow, that was like… I’ve seen that in nature.  I don’t know what it was but I recognize that.’”

As for this possibly being her last record: although she admits she “might be wrong – I’m often wrong,” she says it feels like the last time she’ll want to commit to a full-on formal recording project – but certainly not the last music she’ll ever make.  “I have so many other songs I want to write, coming from a different place in the starfield, or whatever you call it – they interest me to try to write like that, but doing a full recording was just so stressful.  I’m really pleased that I could work on it till I was satisfied, but it took a long time, saving up money, and put me a long, long time in debt.”

While she wound up without a budget for traditional means of promoting the record (hiring a publicist, etc.), she has a few typically crafty tricks up her sleeves – like planning to offer free “ambassador” copies of the album with each purchase so that people who buy it can give copies to people unfamiliar with her music.  Despite the challenges involved in making this album and bringing it to the world, she sounds decidedly optimistic: “I sort of feel I’m in the hands of the universe; if it’s meant to reach more people it will.”

Jane Siberry performs at The Tin Angel on Tuesday, February 9th; tickets and more information on the show can be found at the XPN Concert Calendar.