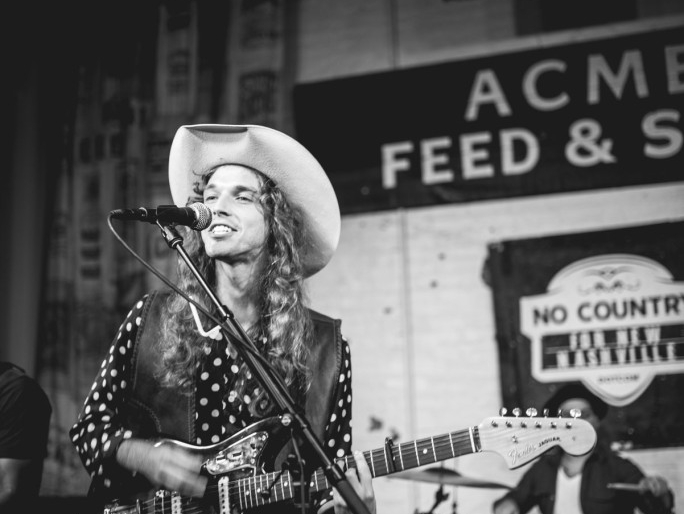 OJR | Photo by Nolan Knight | Courtesy of the artist

Get to know XPN’s February Artist To Watch OJR

WXPN’s February Artist To Watch is singer, songwriter, guitarist, millennial cosmic cowboy OJR, born Oliver John-Rodgers. His new album, Nashville Demos, an album the runs the American music gamut. There are strains of country and folk informed by indie and psychedelic rock. It’s fresh and refreshing, and there’s a dual musical nature on this record that presents OJR as both the singer-songwriter and the rock and roller that is very impressive. The Key reached out to OJR via e-mail to talk about some of his musical inspirations and influences.

The Key: What are your top 3-5 favorite albums of all time and why?

OJR: It should go without saying that albums like Dark Side of the Moon, Abbey Road, Blonde on Blonde, etc. all make the cut for me. But I’m sure you get those answers all day every day, and there’s really nothing I can say about them that you haven’t already heard (ad nauseam). So, for the sake of this questionnaire, I’ll try to pick some less obvious ones here (in no particular order):

1. Déjà Entendu – Brand New. I was born in ’92, and wasn’t raised on The Beatles, Zeppelin, or anything classic like that. So when I first picked up a guitar, early-to-mid 2000s, this was an entirely appropriate—if not the most appropriate—album to baptize me in the Holy Pool of Songwriting. Every track is incredibly easy to play along to—very basic chord changes, very memorable lyrics—and wholly accessible to both musicians and non-musicians. I learned to play a G chord while learning “Play Crack the Sky.” The rest was history.

2. I’m Wide Awake, It’s Morning – Bright Eyes. Same reasons as above. It’s an album at once simple and sophisticated—straightforward American music, set to very deep, inquisitive, complex and philosophical lyrics. It’s mature, but not so much so that it all goes right over the head of a thirteen-year-old. There are serious, adult themes at play, no doubt, but not of an alienating nature. There’s a universal quality to the narrator’s voice here. And personally, that voice immediately set the stage for me, from 2005 on, for my intense, burning draw to some soulless big city somewhere. And it never quite left me. I continued spinning this record regularly for many years (and still do!), up to the day I graduated high school, packed my belongings, and set out for New York, to chase whatever tortured, self-loathing ghosts Conor Oberst was either whispering or screaming about.

3. Feels – Animal Collective. I lump this album in with stuff by Radiohead, and Grizzly Bear, and other “smart,” heady music I was voraciously discovering as a pot-smokin’ undergrad at NYU. To contrast with something like Déjà Entendu, or I’m Wide Awake—examples of very traditional, accessible songs—Feels introduced me to another, more experimental side of songwriting, where you don’t necessarily say what you mean or mean what you say. Where a song doesn’t have to have a verse-chorus-verse-chorus-bridge-chorus structure to be considered a song. AnCo continously push the envelope in contemporary music, and thank god for that! The lyricism on this record is second to none (“Banshee Beat,” anyone?), and it’s just such a warm, fuzzy sound. I know winter has arrived when I’ve got this guy on the turntable nonstop. It’s all about those feels, y’all.

The Key: The Nashville music scene is very fertile these days. Lots of people moving in, setting up shop. What’s going on there? Why in the last few years do you think it’s grown?

OJR: As far as “artist exodus” goes, I default to David Byrne’s (scathing) assessment of the “death” of New York — that a rich man’s playground makes no room for a thriving artistic community — and the artist’s need for an affordable, livable environment to work. In 2010 I moved to New York, and spent several years there. Then, in 2014, I relocated to Paris, and eventually settled in London (both magical, but extremely expensive, cities). When my visa/money had run out there, and I was forced to return stateside, I found myself in New York once more, couch-surfing and struggling to come up with subway fare, for god’s sake! My last flat in New York—where I lived on the Lower East Side for a year—was $1300/mo. I was waiting tables, working multiple jobs as a 21-year-old, you know, all the while trying to book shows and get my name out as an artist. And every time I’d talk to friends or family in Nashville, they’d say, “$1300 a month?! Are you crazy!?” “Yes,” I’d say. And they’d say “Well, you could practically buy a house with that kind of money here!” And boy, they weren’t kiddin’ around.

So, I, like so many other New Yorkers in recent years, fled south, and decided to take a chance on this groovy little town called Nashville. It’s still cheap enough here to have to work only three or four days a week in a coffee shop, and still have all the time (and money!) in the world to focus your efforts on your art. And I think that’s mostly what it’s about—the word about Nashers getting out to other artists, I mean: It’s cheap. Great, charming city, with great opportunities and great attractions and great people—all sorts of characters—all for a relatively low price. You can still afford to be a poet here. Can you imagine that in New York? Ha!

…I’m just being real here. “Money,” after all, “makes the world go round.”

But that’s just for musicians like me. As far as for everybody else, all the non-artist, 9-5 normies rollin’ up to settle East Nashville in minivans and running shoes?… Who knows? #Foodies.

The Key: Who are your top five artists?

OJR: Same disclaimer I gave in my response to Question 1: The legends, like Dylan, Bowie, Lennon, Neil Young, Pink Floyd, T. Rex, The Kinks, etc. tend to be my favorites. But for the sake of providing slightly more interesting, thought-provoking answers than the obvious classics, here are the main contemporary artists who truly stimulate me:

1. Tame Impala. As long as Kevin Parker’s around, making music, I feel completely safe and at peace. They (pretty much alone) are keeping the spirit alive. I worship this band.

2. The Brian Jonestown Massacre. Vibe City, USA. I listen to BJM probably more, on average, than any other group. They get it.

3. My Morning Jacket – Their live show is transcendental.

4. Deerhunter – Another example of what I’m all about: Vibes. I do it all for the Vibes. Wacky dude, brilliant music. In a league of his own.

5. Jamie xx – I forgot to mention, amidst all the rock & roll hullabaloo, that I’m actually a house-music junkie. And make no mistake: This guy’s a true artist. Like Tame Impala, Jamie xx leads all of us phone-screen millennials into a big-banger, raver-of-a-party future. Sign me up!

The Key: Is there a song or songs you wished you would have written?

OJR: “Cigarette Daydreams,” by Cage the Elephant. I don’t even know why. But I totally had that response to it the first time I heard it on the radio, like “Hey, I think I could have written this one.” It’s so simple, but with a melody that’s classic and cool and memorable. (I guess that’s their thing, you know?)

But take that with a grain of salt, because I also remember thinking, “Hey, I could’ve written this!” the first time I heard Heartbreaker by Ryan Adams. That was so many years ago now, though, and I still haven’t written anything that can come close to it. But I do think—if you’re a songwriter, anyway—that that’s a healthy, positive response to music to have. So long as your ego stays checked, that type of wishful thinking should encourage you to try and inspire your inspirers. To write better songs.

Furthermore, I think it’s that universality and apparent simplicity—in say, “Cigarette Daydreams,” or Heartbreaker, or, really, any of Bob Dylan’s seminal work, for example—that is indicative of an awesomely relatable, powerful form of expression in song: It doesn’t set out to confuse, but rather to connect. It’s obtainable, in the best way possible.

The Key: What two or three Nashville bands do we need to know about?

1. Natural Child. They’re my favorite local band—as Stones-y old rock & roll as it gets, and, in my opinion, perfectly emblematic of so-called “New Nashville”—that medley, you know, of country and folk and blues with 60s-obsessed, acid-trippin’, good ol’ fashioned R&R.

The first time I saw them live, I had just moved to East Nashville, garage-rock capital of America. Every January there’s a big “music fest” there in a tiny little ruff ’n’ tuff dive called FooBar. Natural Child didn’t go on until 1 or 2 in the morning that year, but the place was packed—I mean, dangerously packed. You really couldn’t move in there. The middle of winter, but about 90º inside. So I sat up on the side of the stage, to have some breathing room, you know, and really get a firsthand experience of the whole thing. And I just remember looking out, halfway through their second song: Doobies in rotation, two PBR tall boys for every one person, biker brats stagediving and crowdsurfing and shit. Absolute bloody mayhem! And then this one song, “Blind Owl Speaks”—the chorus is “Get high! Get high! Get high!” And I just remember sitting there on the stage, watching hundreds of Nashvillians chant along in total, uninhibited (probably illegal) bliss: Get high! Get high! Get high! And it absolutely sold me on the city in just one night. Rock & roll is alive in well in Nashville, and Natural Child—whether you’re in on it or not—lead the way. Check ‘em out! I think their songs speak for themselves.

2. Liz Cooper. Liz Motherfuckin’ Cooper! She can rip on a guitar, man, and her band, The Stampede, are equally badass. I saw them play a few nights ago, to like, 30, 40 people tops, and thought, “This is bullshit. Where is everyone? Why can’t everybody else see what’s going on here?” I felt like some weird A&R guy, you know, in the back, munchin’ on a basket of fries. But seriously, she’s the real deal, and is every bit of that ridiculously high caliber of musicianship so prevalent in Nashville it’s downright scary. The type that makes you think, “Maybe I should’ve taken lessons at some point…”

She’s finishing up her first LP, and I guarantee it’s gonna put her on the map.

3. Ian Ferguson. He used to front a band called Kingston Springs. They were known for being real young and real good and breaking up too soon. But now he has solo material—nothing that has been released yet (he’s sitting on a goldmine)—and man, it’s gonna blow your mind! Dude’s on another level. As close to true Beatles songwriting as we’ve got in Nashers right now—perhaps in all of America. His impending record has gotta be, hands down, the Nashville release of 2016 I’m most excited for.