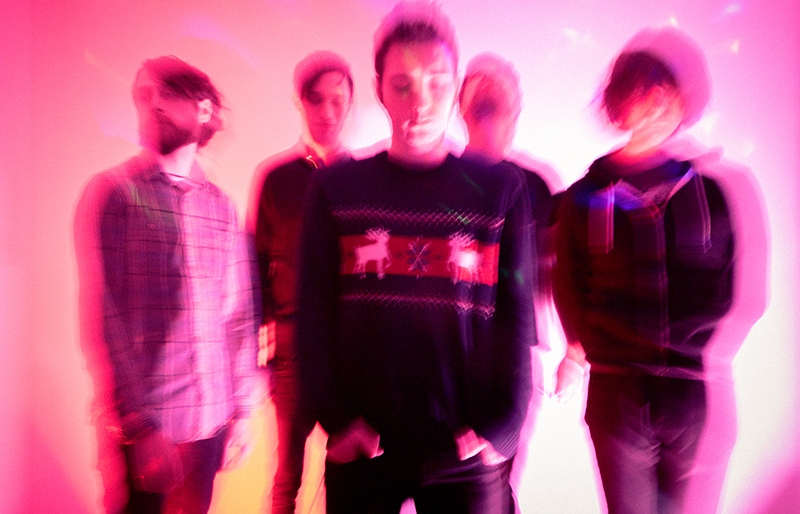 Suite Life: Harsh Vibes on mastering the movements of their new psych opus

Not every album requires a significant amount of dedicated listening to find everything that’s lingering beneath its surface. And then there are others that reveal themselves in layers, a little more with every spin. But the latter doesn’t develop by chance. It’s the product of deliberate writing, tweaking and attention to sonic detail.

The latest Harsh Vibes release, You Left Me Far Behind, is exactly the that. The five-piece has stepped up its songs from being largely free-of-form jams to being some of the most detailed space explorations in Philadelphia. Guitarist and singer Chris Bergen is still the band’s primary songwriter on this two-song EP, and the songs still come from him arsenal of ideas he’s amassed over the years, but You Left Me Far Behind wasn’t recorded as improvised jams as their prior tape releases had been.

“This is the first thing that we’ve put out that’s fully pre-written material entirely,” Bergen says in the back patio of a Fishtown bar where a jazz band is settling into a groove just inside. “These are totally written ahead of time and then I was still producing stuff while we were recording so I’d add little parts here and there. I ended up doing that for a really long time. That’s why it’s so baroque or compositional. Really, it was kind of a pain in the ass.”

He feels that way about You Left Me Far Behind because of how work intensive it was for him to write and prepare for playing live with the whole band. The increased compositional quality of Bergan’s writing on is especially evident on the title track of the EP, which features Peter Sabatino on bass guitar. The amount of tense song sections just keep increasing while seeming to add a crushing amount of layers of guitar fuzz along the way.

Whether they’re chugging through metal riffs or kraut-y lasers, they never lose sight of the tune. Michael Keppeler plays bass on the airier “Follow You Down,” which leans on its synths and drummer John Paul Titlow’s crash cymbals, and is built around a minimalist bridge.

Considering both songs on the EP are just over 11 minutes, preparing them took some serious woodshedding, which prolonged the practice time before the band was ready to record.

Guitarist Kyle Reiff affirms that none of the band has a history of playing “epic, long songs.” And with more expansive songs comes the inherent consideration for how the songs will sound once they’re pressed to vinyl. And this is not only Harsh Vibes’ first vinyl effort, it’s also the first for Dirty Pillows, the primarily tape-based label that released You Left Me Far Behind in January of this year.

Bergen had specifically asked for the EP to be cut hot. It wasn’t only to put more emphasis on Evan Raab’s dense synthesizer sounds than their first two tapes, Psychedelic Gin Blossoms and Dead Collective Soul, both of which are more improvisational and long the lines of shoegazey krautrock. It was a conscious aesthetic choice by the band as a whole. Each Harsh Vibes release thus far has come with a heavy swath of synth fuzz, but up until their release show for You Left Me Far Behind at Johnny Brenda’s in January they’d dialed some of it back when playing live. Raab says he’s started playing a bigger role in each song over time and it took a little extra work to get the synth tones he needed for the new EP. That is until he got his new synth that he used on the recording.

“Specifically on [‘Follow You Down’] there are some real fat synth patches that my old synth just couldn’t do,” he says. “This one’s easier to program, first of all. It’s a digital synth but has an analog interface with all kind of knobs you adjust up and down. For this one you can get multiple different tones going for one patch.”

Really, it sounds complicated and gearhead-y, but it essentially simplified any guesswork involved with choosing his sound. While Harsh Vibes have honed their craft, not only sonically but stylistically, they’ve also made it a point to write with intention of alluding different genres.

“There’s something about this record that you can always come back to it and find something that you like,” says Reiff. The different movements, he finds, tend to come off as referential snippets.

However Bergen sees it for those moments nodding to other styles, he realizes Harsh Vibes’ work stands on its own because of the suite-like aspects to it.

“There’s something about putting together records, or albums where there are little suites of music that follow each other,” he says. “There’s a suite aspect to it as it returns to these little phrases and stuff. I just like doing that and for me it just comes out that way.”