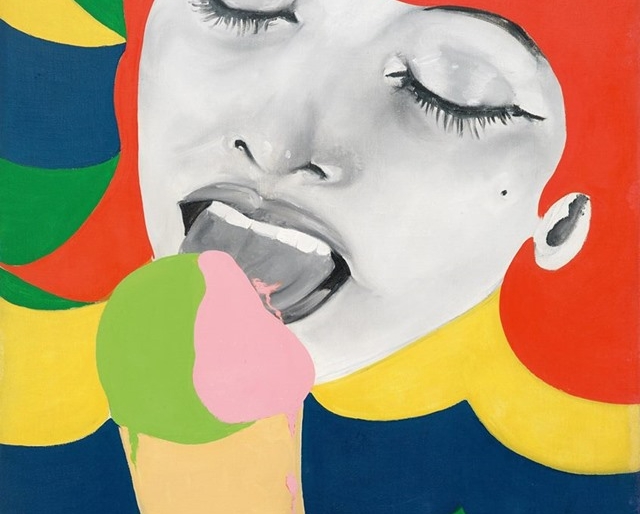 Ice Cream, 1964, by Evelyne Axell (Collection of Serge Goisse, Belgium) | Image courtesy of the Philadelphia Museum of Art
Rock and roller, producer, guitarist, music historian, and host of his own radio show – heard each Saturday on WXPN at 5 pm – Ben Vaughn, has curated the Philadelphia Museum of Art’s first Spotify playlist for their new International Pop exhibit.

The new exhibit at the art museum showcases how “pop art’s embrace of popular culture and imagery became a worldwide phenomenon.” The exhibit features 150 works by seminal artists including Andy Warhol, Jasper Johns, Roy Lichtenstein, Tom Wesselmann, and many others, alongside works by artists from Japan, Brazil, and Argentina.

Vaughn, whose eclectic music tastes are incredibly represented on his weekly “Many Moods of Ben Vaughn” radio show, was the perfect music fan to curate the playlist.

In an interview on the museum’s web site, Vaughn talks about the concept of “international pop,” and what it means to him. He says:

To me, Pop Art and music have always lived together. Especially rock music. I have no memory of one without the other. I was just a kid when Beatlemania exploded and I remember Andy Warhol’s Campbell’s Soup Can getting a lot of attention at the same time. It was all mixed together. Dylan going electric, Roy Lichtenstein creating comic strip panels, whatever. It didn’t seem to matter. The barriers between commercial product and fine art seemed to be disappearing and not everyone was happy about it. It was a very exciting time. Very anti-authoritarian. Other fields were affected too (photography, film) but American music and art was what I was paying attention to back then. Later on I discovered how international this period of change was.

The playlist includes songs by Sonny & Cher, The Beatles, Bob Dylan, Serge Gainsbourg, “The Batman Theme” by Neil Hefti, Astrud Gilberto, Miles Davis, The Velvet Underground, and others. Listen to the playlist below.