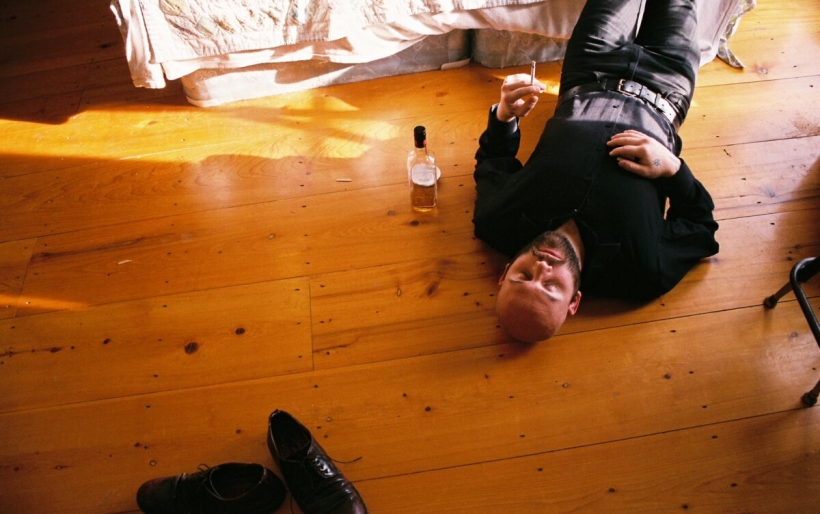 For the past ten years, Jeff Riddle has been in and out of the Philly punk scene, playing in bands such as The Holy Mess and Scarier Area. He has shared with us Destroy, the first record from his new project Bella Vista Social Club. Tonight, they play at Everybody Hits with Emperor X, Three Man Cannon, and Peter the Pianoeater.

Riddle spent most of last winter recording Destroy at his house with his friend, Jeff Leonard. In an e-mail about the project Riddle told us:

About a year ago I called my friend Jeff Leonard from South Carolina and talked with him about recording some songs. We talked about doing it in a studio down there over the course of couple of days, but eventually came to the conclusion that Jeff ship some mics and gear up to Philadelphia and record it in my house. We recorded it in a week in a room with a little space heater that we would turn off while we were recording. In between takes we would turn it back on and have little ten minute “heat breaks” to let the room warm back up again.

Riley Byrne came over one day with his upright bass and changed the whole dynamic of the record. This is something I had always wanted to incorporate into these songs but never considered a possibility until I heard Riley come play on them. He tracked all the bass in a day and said, “I can come back tomorrow and lay down cello.” He did, and I was blown away by what he did on the record. We decided to start playing shows together, and have been since.

A sort of serendipitous thing happened with the mastering of the record as well. Jeff Leonard passed the songs on to a guy named Michael White who has worked on everything from Whitney Houston to The Talking Heads. He heard the record and agreed to master it. I still can’t believe it happened. Upon hearing the finished record, I decided to save up the money and press the LPs myself. It’s been a lot of work but I’m excited to finally share it.

The first single from the record, “Black Cloud”, brought Riddle out from his punk exterior musically, while still containing its brave lyrical honesty. On “Trash Age”, he channels folk-punk singer-songwriters like Frank Turner with lyrics such as “My brain is still a chemical spill” and “There’s a hole in my chest where my heart used to be”, using only two minutes to make a simple statement go far. “Nervous Sister” could be and basically is a punk song, but Riddle chose to scale back the instrumentation in favor of a quiet intensity.

With the title track, a soft-spoken strummer brought together with double bass and electric guitar, Riddle struggles with his past, religion, and many other themes that also play throughout Destroy. Are we children of a greater power? Or are we microscopic organisms that could be stomped out at any second?

Destroy really comes together when Riddle embraces his folk roots. “Promises Of Gold” turns Riddle into a country balladeer, picking his guitar and utilizing violins to compliment his melodic vocals. On “Three Sheets”, Riddle sings, “I’ve got my guitar and a bottle of gin.” While the mournful cello recalls something that sounds a little more like whiskey, Riddle doesn’t mind. All he needs is someone to drink it with.

Jeff is bringing songs from Destroy to Everybody Hits tonight with Emperor X, Three Man Cannon, and Peter The Pianoeater (from Dogs On Acid). More information for that show here.

Stream Destroy by Jeff Riddle and Bella Vista Social Club below before its release on March 4th and pre-order it on vinylhere.