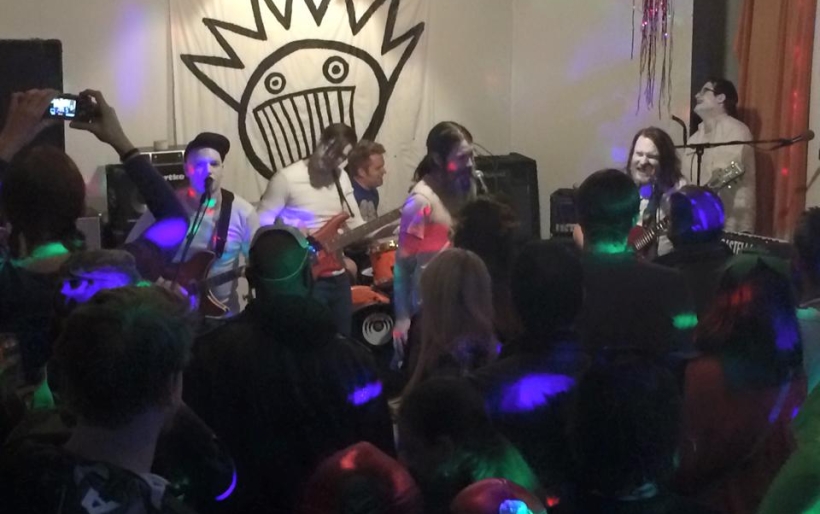 Members of On the Water, Sandcastle and Post Sun Times performing as Ween at Cha-Cha’Razzi on Halloween 2015 | photo by Lindsay Jamison courtesty of Cha-Cha’Razzi

By Julie Miller
February 26, 2016
03:02 PM
Share
Members of On the Water, Sandcastle and Post Sun Times performing as Ween at Cha-Cha’Razzi on Halloween 2015 | photo by Lindsay Jamison courtesty of Cha-Cha’Razzi

“You could see it coming for years now, but that doesn’t make it any less of a drag.”

That’s how The Key’s John Vettese started his farewell post to North Star Bar when it announced the end of its days as a music venue back in October. And while South Philly venue Cha-Cha’Razzi is considerably younger than North Star Bar, the news that the multi-use DIY space is being forced to close its doors is equally a drag – it was only a matter of time before the S. Bancroft St. building was swallowed up in the Newbold development boom.

During its seven year tenure as an artistic space, Cha-Cha-Razzi was an oasis for creators of all kinds. We asked current member and booker Robin Carine to name a few of his favorite memories and his response is telling; he sent back two paragraphs of events that were hosted within and bands that rolled through Cha-Cha’s walls, saying “It’s hard to fit seven years of craziness into a couple of sentences.”

The venue has been host to tour kick-offs, album release parties, benefit shows, covers shows (including a legendary performance of Magnetic Fields’ 69 Love Songs) and Kat Kat Phest sets, not to mention its role as an incubator for dozens of its own members’ musical and visual projects. There have been comedy shows, an annual comic book BBQ and many photo and music video shoots, including a few in the video list below.

Scanning the list of bands and performers Carine mentioned, NAH, Ma Jolie, Drums Like Machine Guns, David Liebe Hart, Bad Braids, Soul Glo, Kississippi, Good Luck, Sheer Mag, Allo Darlin’, Strand of Oaks, Attia Taylor, Dewey Decibel, Telequanta, The Pretty Greens, Literature, Grandchildren and Trophy Wife are just a portion of the names that jump out. Clearly this was a space devoted to giving a platform and audience to an inclusive and expansive community of artists.

To say farewell and to celebrate everything they’ve accomplished, the Cha-Cha’Razzi folks have booked several events over the next few weeks that will culminate in a “flea market / junk sale / art expo / ping pong tourney / dance party hang session” on March 12th. Things kick off tonight with Sold, Sea, The Cloth, Ulthar and Booklegger, with Clique, Werebears, Cranes are Flying, Boy Lawyer and In Bruges following tomorrow.

More information about the farewell shows can be found here. Check out some videos filmed at Cha-Cha’Razzi below.