UNLOCKED: An afternoon in South Philly with Lushlife 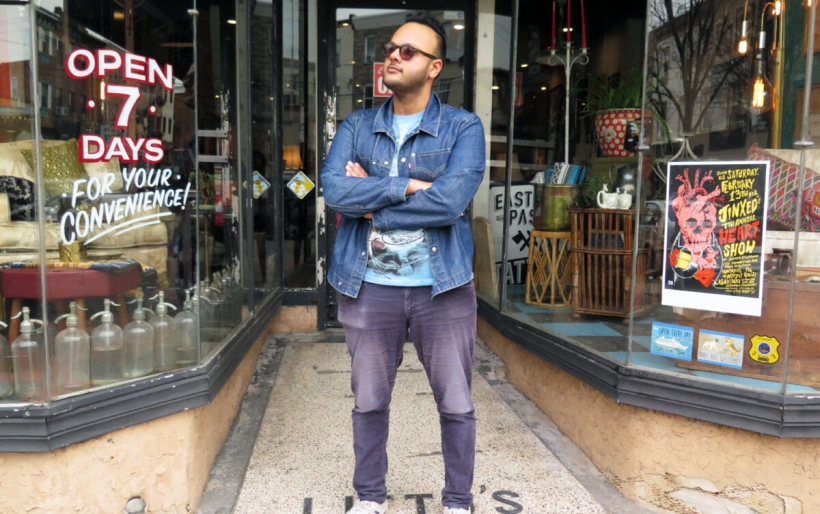 UNLOCKED: An afternoon in South Philly with Lushlife

All week long we’ve been putting the UNLOCKED spotlight on the new release by Lushlife and CSLSX, Ritualize. Tomorrow night’s record release party at Johnny Brenda’s is expected to be epic. Lushlife will be performing with CSLSX, and he promises some special guests.

Fresh off a 72 hour media marathon in NYC, Lushlife, aka Raj Haldar, is a little hazy. Slouched deep in his blue upholstered couch with his Harmony electric across his lap, it’s the first weekend he’s had in awhile. Before New York he was in Austin at his label’s, Western Vinyl, HQ and the next weekend he would be flying out to the midwest to film with Nik+Lamar, who filmed the award winning “Magnolia” for Plateau Vision.

Saying Haldar is a busy guy is quite the understatement.

“Instead of the studio, we are going to do what I usually would do on a Sunday,” Haldar insists.

For the past three years, Haldar, along with Philly’s CSLSX, has been recording what he identifies as a paradigm shift in his maturation as an artist: their new collaboration, Ritualize. The realness of mortality, as in his first single “Body Double”, and of socio economic strife, felt in “Strawberry Mansion” featuring Freeway, are evidence of a heavier shift in Lushlife’s focus. But on that particular Sunday, walking up Mifflin Street near his South Philly home, he appears elated to just have a few destinations to hit at his own leisure. First stop: Jinxed on Passyunk Ave. It’s during a stop at Chhaya Cafe before leafing through used vinyl at Beautiful World Syndicate, that Haldar happily talks shop under the warm glow of hanging artisan light bulbs over the center island. What’s most striking about Ritualize, other than another testament to Haldar’s genre-bending powers, is the calculated approach to it’s release. Down to the very last detail, Haldar has been slowly piecing together the story of his very personal turning point.

The Key: Ok, “This Ecstatic Cult”. That was the first track you released right?

Lushlife: That was the first one this year. We took a little bit longer than one that generally takes with album rollout with this one because I have just been off the grid essentially working on the album for three years. In internet time that’s for fucking ever. I’ve seen like entire sub genres and micro genres have a whole ebb and flow then go away in the time I’ve been working on this album. Having said that, I wanted to make sure I could spend a little bit of time ramping up the album and get reengaged with the audience. So when we announced the album, we released a song called “Body Double”, that was the first single. We did a UK only single called “The Waking World”, which is the second track on the album. The top of this year, which is really when the campaign hit in earnest, we released “This Ecstatic Cult” with Killer Mike.

The Key: Word, it’s a great track. Why did you release a UK only single?

Lushlife: I’ve a fairly international fan base. I just think it’s important, number one i think certain tracks work better in certain markets. Our UK radio team was really excited about “The Waking World” for Europe. It got played on BBC One radio and shit. There was a fair bit of really high level traction there. So, I have a history in the UK as well. Obviously on the internet everyone can access just about anything, but just making sure that we have the sort of presence in Europe, we are mindful of the presence in Europe as well as in the US cause eventually we are going to be touring.

Lushlife: Yeah, I’ve heard a couple times as we started rolling this album out that Lushlife albums are known for their sort of wide, diverse, featured artists. The one thing that binds the philosophy all together, it’s always just about being in service of the music. So the Ariel Pink track, when we have the track and I started writing it was like, I heard his voice on chorus. Reaching out to him was sort of direct, but on the other hand getting Killer Mike, the CSLSX dudes had sort of spoke to him that one of them works for MTV and they had sort of crossed paths there. Other folks on the album, RJD2, Nightlands, those were personal connections. It’s just about everybody, every little piece, coming together to make this overall idea come to life. The Key: Speaking of which, “Hong Kong (Lady of Love)” is a very interesting track. There’s the sax and the very substantial bass line that is very consistent with the genre, then there’s you over top. It just seems like a real genre warp.

Lushlife: Yeah (laughs) that’s it right there. On the flight I started writing and I immediately started writing in this kind of, very dystopian kind of, future asian city kind of framework. When It was weird bc it was the first time I had met him. So I was just like “from here forward, you have to be this 40 year old asian woman who maybe once was very attached to asian youth culture but now has a very straight laced job but longs for excitement.” He totally just took all that in and then paced around the studio for like 45 minutes and just knocked out the chorus and did some guitar stuff. You know, I saw somebody on Facebook or something the other day that they are like between Ariel Pink, the kind of Giorgio Moroder film soundtrack, 80s soundtrack, backing track and you are sort of classic 90s east coast flow. These are all sort of disparate thing that I love, thrown together and it somehow works. Seeing that comment just made me feel like “the job is done”.

The Key: What about music videos?

Lushlife: Music videos have historically been very important to what I do. The videos from the last release, Platow Vision, you know. They were like SXSW jury picks for music video and one got some awards, vimeo staff pick. Each one was an artistic statement of it’s own and beyond that i think last time around was when I realized important music videos as a vehicle which extends your audience. The video for Magnolia for instance there are as many…I mean, tons of people who found out about my work through that video and otherwise wouldn’t have because they may not listen to indie music or hip hop music like that. That video had a life of it’s own.

The Key: When I was reading through your process, you know releasing the singles, doing an intense press junket…everything seems really calculated. Can you talk about your approach to this release?

Lushlife: Definitely. Number one, I like…making a record is only one part of what I love about being a musician. Even the records that I loved growing up in the 90s and early 00s, I was as much sort of interested in how they were released as well as the music itself on a CD or whatever. That’s like, everything from artwork for the record to, you know, how you sort of position yourself in press photos. After you spend three years working, toiling over a record, you should think of the best fucking way to put it out in the world. We have spreadsheets when we first started thinking about how we were going to roll out the album with month by month, what we wanted to come out when and what other sort of ancillary sort of press opportunities we might have and what we wanted to do videos for and how we can make that happen. It’s a huge undertaking but luckily I also have a lot of people around me that are on the same page and help execute that stuff in the way I wanted to. The Key: Yeah totally. Can you kind of talk about the overall story arc that you’ve built with the singles and the art, leading up to the release. Can you talk about that story that you are trying to create?

Lushlife: Ultimately, with everything that we are doing and every piece of media, music that gets out there, I really want to this time around…the record is so much more personal. Lyrically and I think also the music, the whole thing together with CSLSX’s production and how this whole thing came together it’s such a unique 50 minutes of music that we really wanted every single and everything that we did, every interview to kind really help tell the broader story of how much this record kind of….I feel like, is sort of like a paradigm shift in my career. IT was important through ever track review and every piece of artwork and every on camera interview and everything i’ve done up until this point to really communicate that this is a very unique and very personal piece of work. That’s what I want to do even when the record is out, with the live show, I’m really super siked. It’s the first time I am joining forces with CSLSX. We have a full band live set…I’ve always had a one man show and I’ve done a lot of building the track live with samplers and drum machines and keyboards and stuff. There is just something about having a group of people interacting on stage that it’s sort of like, it takes things to the next level. I think this record more than anyone in the past, is unlike anything else that is out there. I don’t think there is even “Body Double” and “Hong Kong (Lady of Love)”, are both four on the floor. There’s filmic, Michael Mann, Miami Vice rap joints. I literally don’t think existing that sound like that. We have a very unique expression of Hip Hop with this album. 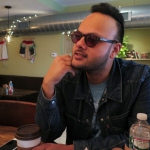 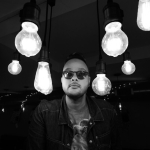 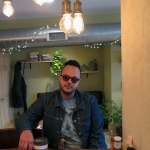 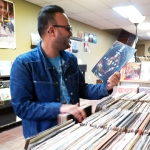 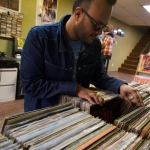 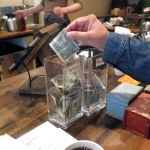 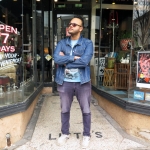 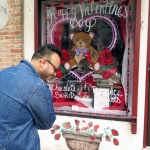 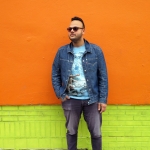 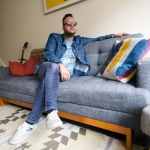 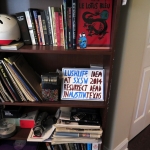 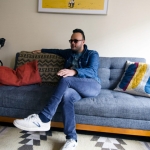 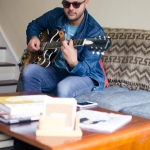 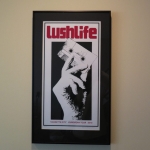 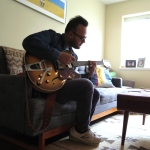