South Jersey electropop outfit Memory Tapes pretty much operates at the whim of lone member Dayve Hawk. After spending the first half of the aughties fronting the popular indie-dance outfit Hail Social, Hawk moved to the rural Garden State and became something of a bedroom production wizard, releasing digital EPs under the names Weird Tapes and Memory Cassette before fusing the ideas under the Memory Tapes banner. Seek Magic was the band’s remarkable debut in 2009, followed by Player Piano in 2011 and Grace / Confusionin 2012.

Though Memory Tapes hasn’t released anything new in the full-length realm since then, he did appear on a Carpark Records anniversary 12″ last year, and played a show at Boot and Saddle last summer.  This year, he ventures out on a more extensive run of dates in the north and midwest, culminating in a May 14th gig at Boot and Saddle, a May 19th gig at Baltimore’s Metro Gallery and a May 20th gig at Brooklyn’s Palisades.

No word yet if this new level of activity indicates a new release – in true Memory Tapes style, Hawk announced it with an unfussy blog post showing the tour flyer and giving no textual context – but hey, as you can see from the below video shot at a 2010 Making Time, Memory Tapes are great live, and whatever lets them bring that energy best, I’m on board with.

Revisit my 2012 interview with Hawk here, and get info on the tour below. 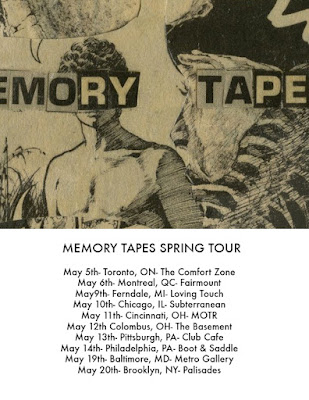