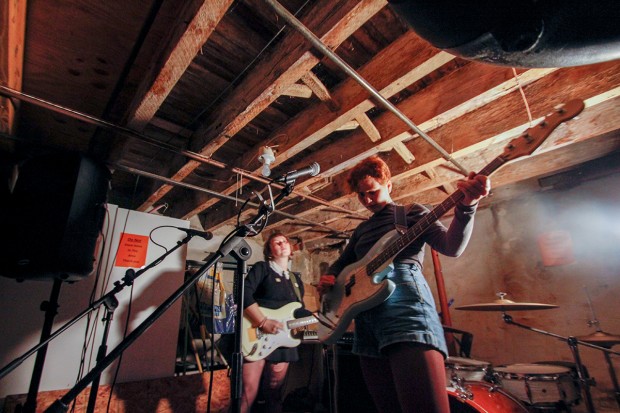 Don Giovanni Records has announced an anti-establishment festival of sorts, set to take place September 16th to the 18th at the Asbury Park, NJ Convention Hall. The New Alternative Music Festival will celebrate truly independent artists in a truly independent way, with no corporate sponsorship backing the event.

To that end, you’ll see a cross-section of DIY communities represented including Philadelphia outfits Girlpool, Trophy Wife and Radiator Hospital, along with former Philly resident Daniel Bachman, Montreal’s Ought, New York musician Laura Stevenson and New Brunswick trio Screaming Females. A special treat will be the reunion of P.S. Eliot, the joint effort of Waxahatchee’s Katie Crutchfield and Swearin’s Allison Crutchfield from their Birmingham, AL days.

From the festival press release:

The New Alternative Music Festival is not just a concert it is also an intentional event. It’s an attempt to gather together bands with diverse sounds, but common values. The performers are independent artists without ties to major labels or their music distribution. There will be no sponsors, no backdoor advertising via branded content, or other base money-making schemes.

This is a pro-weirdo event held in direct opposition to the apolitical sludge that has come to pass as ‘indie’ and that has nothing to do with operating independently. Where many festival bills are structured to reflect critical acclaim, the NAMF lineup is meant to reflect a community. In addition to making great music, many of these artists are involved because they are peers, tourmates, and friends.

Tickets are available here; check out some participating bands below and see the full line-up here.