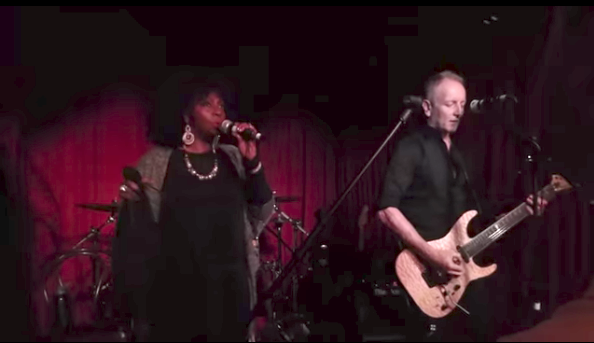 Delta Deep is two parts rock, two parts R&B. Or, as the band dubs itself, “Blues-Rock-n-Soul.”

Representing the rock faction are Phil Collen (Def Leppard) on guitar and Robert DeLeo (Stone Temple Pilots) on bass. On the R&B side of things, there’s the lesser-known vocalist Debbi Blackwell-Cook and drummer Forrest Robinson. When you mix it all together, you get something in the neighborhood of energetic blues rock.

The group first formed back in 2012 thanks to a family connection (Blackwell-Cook is the godmother of Collen’s wife). What initially was some casual jamming between Blackwell-Cook and Collen quickly turned into something more serious. The two soon added Forrest Robinson and Robert DeLeo to the mix and officially created Delta Deep.

The group released their self-titled debut last year, consisting of both covers and original material, and they stopped by Ortlieb’s this week for their first Philly performance.

It’s clear from the Ortlieb’s set that Delta Deep has embraced its diverse background. Blackwell-Cook has a classic voice reminiscent of Aretha Franklin, and when she takes center stage on certain tracks, they sound as if they could have come straight from Motown. Then there are moments when Collen takes his electric guitar and goes to town, doing his best Def Leppard impression. Blues-Rock-n-Soul, indeed.

Check out a video of the band’s Ortlieb’s show below.