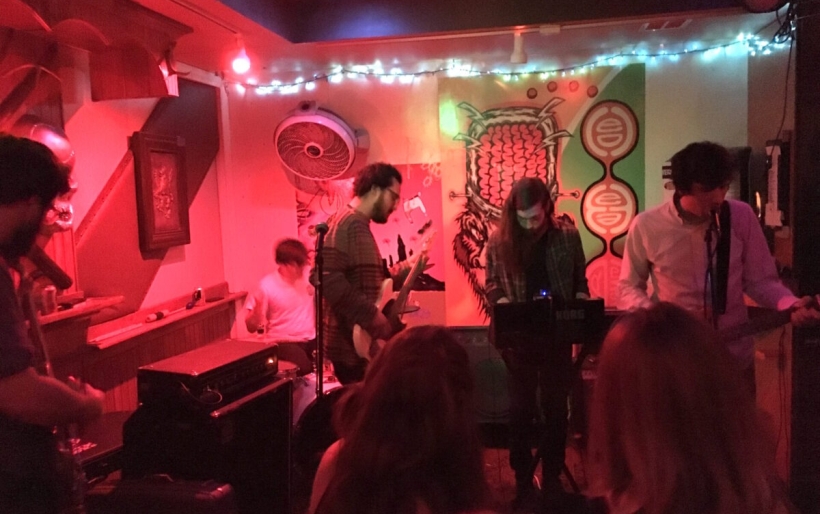 So we’ve been pretty excited about the emerging Philly band Cherry this year. The new project of Kite Party’s Russell Edling trades his old group’s thundering amps and crushing guitar riffs for more nuanced, dreamy indie rock. The band premiered a brilliant Craig Scheihing-directed video for “Alligators” with us in January, released its Gloom EP in February and recorded a Key Studio Session in March.

Cherry’s belated EP release show happened Sunday night at Kung Fu Necktie, and it was fantastic. The five-piece band – Eric Osman on drums, Spenser Hogans on bass, Justin Fox on guitar, Jesse Kennedy on keys – rocked the EP in its entirety and then some, their Yo La Tengo guitar tones intermixing beautifully with synthesizer accents and hammering rhythms. The treat of the night was a new song – newer than even “Cherry,” which was debuted in their key session – that had a driving, soaring quality reminiscent of New Order’s “Age of Consent.” I was floored.

So I’m pretty freaking psyched to report that Cherry is joining us on the 2016 edition of Key Fest – they’ll join Madalean Gauze, Shelf Life and Kississippi on the MilkBoy stage for a night of indie / punk on Saturday, April 23rd.

Below, watch a new video of Cherry performing “Alligators” live at WXPN Studios for their Key Studio Session, and get tickets and more information about Key Fest at the XPN Concert Calendar.