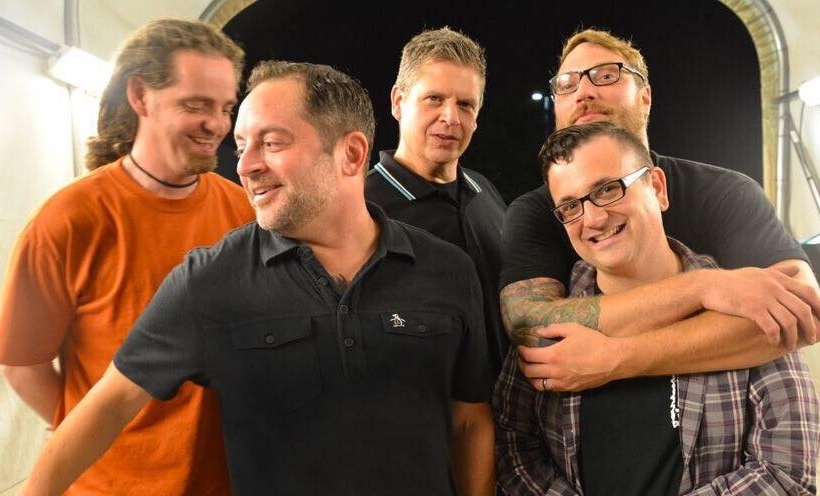 Philadelphia’s Easy Creatures is the meeting of the minds among five punk scene veterans who have done time in bands like Walleye, Railhed, One Up and Kill Verona. In the 90s, they released records on revered scene label Jade Tree Records. A decade and a half later, they teamed up for a new project that releases the new Lo Fidelity EP on Charlotte, NC’s Self Aware Records this Friday.

In some ways, it’s a more mature approach to a sound that’s still amped-up and aggressive. Like Hüsker Dü, the music is loud, it’s fast, it hits hard, but there’s a undercurrent of melody and pop songcraft. Says vocalist Greg Polard: “I sorta want to say ‘adult themes’ to a degree and not in the pornographic way, but especially ‘Sick Day’ and ‘Fontanelle’ lyrically are songs I don’t necessarily think I would’ve written when I was a teen / in my early 20s.”

We’re excited to premiere the EP for you today, and Polard was kind enough break down the songs track by track; listen and read below. He’s actually the newest member of the band; Easy Creatures started in a couple years back with drummer Jeff Tirabassi, guitarists Joey Simpers and Mark McKinney. They released a split 7″ in 2014 with Chicago’s All Eyes West via Jump Start records, and subsequently brought on Paul Butterly on bass and Polard as vocalist.

“When writing these songs, we found ourselves to be in the unique position of starting over,” says Tirabassi.  “Greg joined the band as our new singer and his different singing style, it allowed our years of influences to create an foundation for the sound we had always intended to achieve.”

Easy creatures plays the Atlantic City Beer and Music Festival this Saturday, April 9th, then returns to Philly on April 14th for an EP release show at Ortlieb’s.

Sick Day – “For me it’s about my views on working a desk job but being too complacent to actually do anything about it and feeling restricted by my own complacency. At the same time I tried to make it pretty generalized and basically saying ‘if you actually want to make a change, you’ve got to do something.'”

Fontanelle – “I had read an interview somewhere with Paul Westerberg where he was talking about how quickly The Replacements got over trying to fit in with the punk scene and how ironic it was that essentially the scene mantra is ‘be different, be just like us.’ ‘Fontanelle’ is my take on that irony within the punk/HC scene.”

Jewels – “Inspired lyrically by early Green Day and a lot of the East Bay bands of the late 80s/early 90s. Or to quote Dr. Frank ‘this is a song about a girl.'”

Low Fidelity – “Music is a therapy for me and probably almost to anyone involved in punk rock and HC especially. This song is my version of The Smiths ‘Rubber Ring’ meets Bob Mould’s ‘Keep Believing.'”