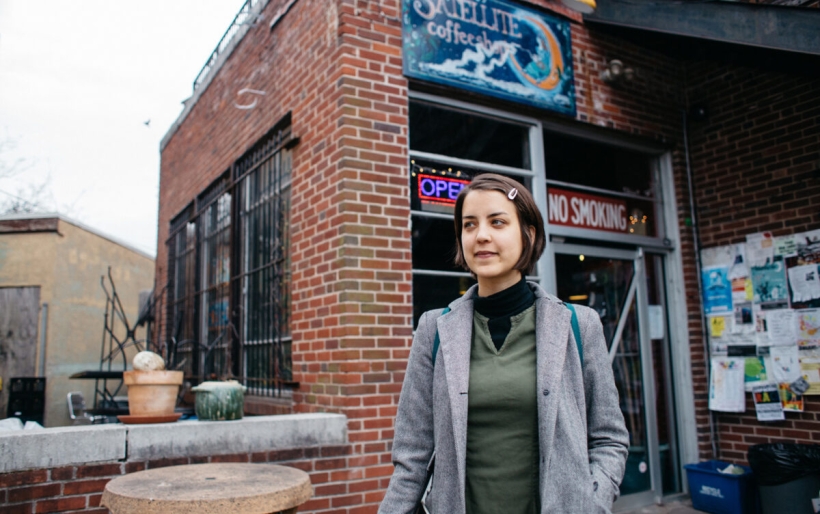 Sound and Place: Free Cake For Every Creature

Sound and Place is a recurring series where we take Philly musicians to their favorite places in town. For this installment, we visit Katie Bennett of Free Cake for Every Creature at Satellite Cafe in West Philadelphia.

It’s a Sunday afternoon and Katie Bennett is reading a book. There’s a chill outside on Baltimore Avenue, but she’s cradled by the intersection of two red walls in a seating area just off of the register at Satellite Cafe in West Philadelphia. Bennett does this a lot–to clear her head, get a rush of caffeine, eat some of the coffee shop’s vegan treats and to write.

Her band, Free Cake For Every Creature is about to release their first full length, Talking Quietly Of Anything With You on April 15 on Double Double Whammy. Meanwhile, she recalls the first get together she hosted at her home nearby, the first place she’s lived since moving from Saratoga Springs in 2015, where she’d spent five years.

“We were having some friends over for a little barbecue that evening and I was sitting and thinking about how excited I was and how cool and how good I felt being here,” Bennett says. There’s a sheepish enthusiasm in her voice, much like the vocal style in which she sings–hushed and patient. It was her first summer in Philly, a time chronicled in Talking Quietly, a twee-pop collection of memories about exploring a new landscape, doodles in notebooks and the smell of city rain. Bennett creates self-contained narratives of a certain kind of cuteness that comes with the early days of new relationships, both romantic and with a new city. From the swift and giddy “I Wanna Make You Bread” to the pattering “First Storm Of The Summer,” Taking Quietly is all about firsts: the first time you want to show your crush affection, the first time the rain soaks the streets you’ve just only gotten to know, the first party you throw at a new house.

The afternoon before the latter saw Bennett sitting, just as she is now, at Satellite Cafe, her notebook spread in front of her, jotting lyrics. The words to “First Summer In A City” were written this way.

“I feel a little silly talking about going to a cafe to write, but I do like to come here to write,” Bennett says. “Playing music, you spend so much time being inside because that’s where the instruments are, so it’s nice to be able to leave the house and still be creating something and drinking coffee.”

Getting outside is integral to Bennett’s work. Beginning as a bedroom project in 2013 while attending Skidmore College, Bennett would tinker with her guitar and a tape machine, writing songs she’d keep a secret for over a year and a half before showing her boyfriend, uploading them into her iTunes as “free cake for every creature” opposed to “Katie’s Songs” or any other obvious identifier.

“I’d just been doing it for really long at that point and I was like, ‘You know what? I am proud of this and I like this,’” Bennett remembers. “I’d been reading about riot grrrl bands and how they showed people their first songs even if they hadn’t been playing for very long because they wanted to show people that they could do it too. They weren’t afraid of showing people their process and their development. So I thought ‘That’s me, that’s where I’m at’ and it encouraged me so if I could encourage someone else, that’d be great.”

Gaining confidence in her Frankie Cosmos-reminiscent solo work allowed her to post the self-recorded and produced tracks to Bandcamp, eventually releasing the EP Moving Songs in early 2015 on Double Double Whammy. The sweet and tender songs that barely top two-and-a-half minutes detailed Bennett’s move to Philly and the trials that come with being an early-twentysomething relocating to a new city. “All you have to be when you’re 23 is yourself,” she whispers over soft guitar strums.

Slowly, she’d begun to transition her playing from her bedroom to the basement shows in her house in Saratoga Springs to eventually, other DIY venues in Philly, continuing to write about her new surroundings and quirky observations of young love: “You are the brownie to my TV dinner” she sings on “For You,” the first single from Talking Quietly.

For the first time, Bennett and her newly assembled band of Colin Manjoney, Francis Lyons, and Ian Stewart, stepped outside the world of bedroom and tape recording to create Talking Quietly at Salvation Recording Co in New Paltz, NY with Chris Daly (Porches, PWR BTTM, Diet Cig) at the helm. In a matter of a few days, all the tracks were recorded–digitally and then ripped through a tape machine–and Bennett was left to sit with the completed songs.

“I kind of missed obsessing over the songs,” Bennett said. “I’d done everything else myself so I kind of missed going back to something a month later and being like, ‘This isn’t totally what I wanted’ and tweaking it. I couldn’t really do that with this record so maybe it’s something I should consider for the future, finding out a way to do it over a period of time. That being said, I’m so happy with how it turned out and I think it sounds awesome.”

Only a few days from release, and a show at Everybody Hits on Saturday, April 16, Bennett thinks about her favorite kind of cake–she’ll be giving free cake to every creature who attends the show.

“The first thing that came to mind was carrot cake, but I love all cake,” she says with a giggle. “Lemon raspberry cake sounds great. I love chocolate cake, too.”

Even though the record will soon be fresh in listener’s minds, she’s still toting her journal to Satellite Cafe for whenever inspiration hits. There are some new songs, she says, that she’s written in this very spot. But for the time being, it’s all Talking Quietly. And that makes Bennett a little nervous. 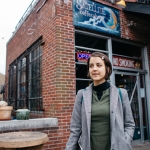 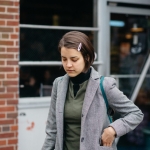 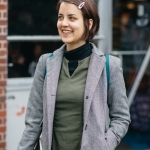 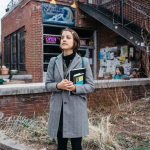 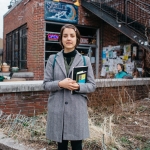 Catch Free Cake For Every Creature on Saturday, April 16 at Everybody Hits for the Talking Quietly Of Anything With You release show with Hello Shark, Addie Pray, and Microsoft Paint. More information can be found here.